A UNIQUE medieval fresco in St Emeram’s Cathedral in Nitra was discovered under an important early Baroque altar and a debate over what to do with the fresco, a rarity in Central and Eastern Europe, quickly ensued. 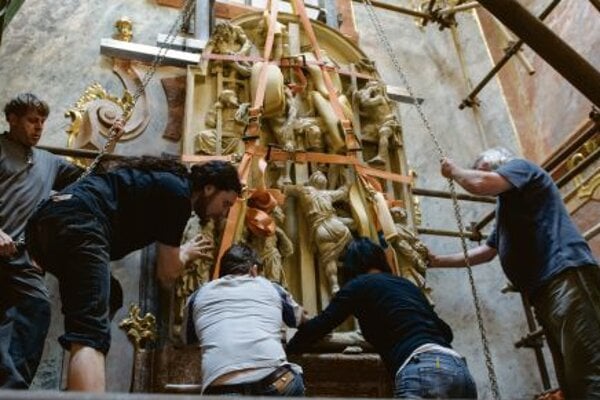 A UNIQUE medieval fresco in St Emeram’s Cathedral in Nitra was discovered under an important early Baroque altar and a debate over what to do with the fresco, a rarity in Central and Eastern Europe, quickly ensued.

An international committee has since decided to leave the 14th century fresco in place and relocate the altar to the opposite side of the lower nave of the church.

“Both these important monuments will thus be presented to the public,” Nitra Archbishop Viliam Judák said. “The fresco will be lit and accompanied by explanatory text, so that visitors can understand the core of the findings.”

The marble altar from 1662, called the Altar of the Deposition from the Cross, will be moved to the opposite side where the Altar of St John of Nepomuck is situated. Restorers found the unique fresco in the first half of 2012, hidden under the altar in the Nitra Castle cathedral. Dating back to the 14th century, it depicts the cycle of the Virgin Mary. Spokesman of the Nitra Archdiocese Miroslav Lyko told the TASR newswire that it was probably the only fresco of its kind in Central Europe.

Similar frescoes can be found mostly in central Italy. Next to the altar, there are more paintings which are even older, but these will not be uncovered.

The international committee “decided that the altar is a piece of furniture, after all, and if anything is moved, then it [should be] the altar. The fresco is part of the architecture,” Vladimír Plekanec, the head of the cathedral’s restoration works, told the SITA newswire. The altar, which is almost seven metres tall, was moved to the western nave, where in May it was installed approximately 30 centimetres in front of the late-Baroque altar dedicated to St John of Nepomuk – which will remain unharmed but will not be viewable to visitors.

The stone altar had to be dismantled into 60 separate pieces and then reassembled and fastened to a steel frame, in a type of procedure not commonly carried out in Slovakia.

“We put the altar together authentically, like it was assembled originally,” restorer Jana Balážiková told SITA.

She added that the lighter pieces of the altar weigh 50 to 70 kilograms, while the heaviest piece, the relief Descent from the Cross, weighs about 1.2 tonnes. Each piece had to be lifted with a pulley and put exactly in the right place to prevent serious or irreversible damage.