THOUGH the parliamentary opposition parties made an attempt on September 19 to have Prime Minister Robert Fico, the leader of Smer party, sacked over claims that a major gas deal between the state and a financial group was masterminded by the latter, the dominance of Fico’s Smer party in parliament saw the government easily survive the no-confidence vote. Fico called the process “absurd”. 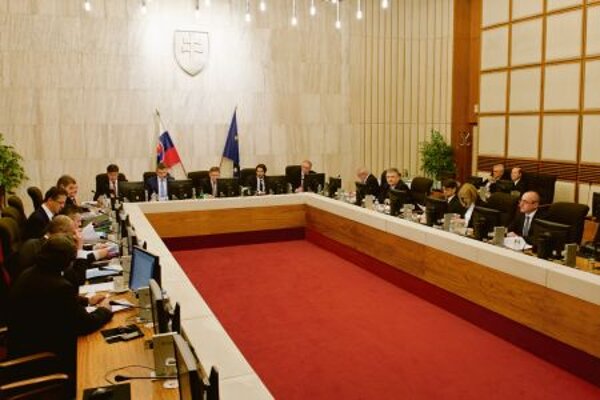 THOUGH the parliamentary opposition parties made an attempt on September 19 to have Prime Minister Robert Fico, the leader of Smer party, sacked over claims that a major gas deal between the state and a financial group was masterminded by the latter, the dominance of Fico’s Smer party in parliament saw the government easily survive the no-confidence vote. Fico called the process “absurd”.

Fico, the first prime minister in Slovakia’s post-revolutionary history to run the country without so much as a worry about a coalition partner, comfortably headed the government while maintaining high approval rates throughout 2013. In early October, Smer was backed by 39.7 percent of those polled by the MVK polling agency while the second most popular parties were the Christian Democratic Movement (KDH) and Ordinary People and Independent Personalities (OĽaNO) both at 10.4 percent, according to an MVK poll. Similarly, in early December, Smer was backed by 39 percent of those polled in a Polis phone poll leaving far behind the KDH, which came in second at 9.6 percent.

The fragmentation of right-wing parties continued in 2013, with the KDH, Freedom and Solidarity (SaS), OĽaNO, as well as the Slovak Democratic and Christian Union (SDKÚ) seeing deputies quit their ranks. Observers suggest that reorganisation and disintegration on the right-leaning half of the political spectrum is likely to continue.

All that said, the wakeup-call of the year is clearly the victory of right-wing extremist Marian Kotleba, who has a history of racist statements and acts, who defeated the Smer candidate and incumbent Vladimír Maňka in the second round of the regional elections in Banská Bystrica Region on November 23. Kotleba’s victory has overshadowed even Fico’s statements that his party Smer was the victor of the regional elections while observers reminded the prime minister of his overly confident statements that a Maňka victory was certain.

After Kotleba’s election, media commentators and observers have suggested that even Smer might have suffered a blow to its confidence and its leaders have since been more careful when talking about the party’s unshakeable dominance.

Smer and Fico long remained tight-lipped about the eventual candidacy of the prime minister for the presidential post before he finally announced his decision to run on December 18. Political scientists said they do not find Fico’s tactics surprising, suggesting that the prime minister would not throw his hat into the presidential election ring until determining he was certain to win.
“I understand my candidacy as a service to Slovakia,” Fico said during a public ceremony that doubled as a speech reviewing the year and previewing 2014 plans for his government in the presence of media, members of his government, members of parliament and foreign diplomats accredited in Slovakia.

Fico will be the candidate from his Smer party, which also controls an outright majority in parliament. It is a duty of the ruling party, which enjoys a strong mandate in the parliament, to propose a candidate for the presidential office, Fico said.

Nevertheless, the economy, more concretely how to tame the deficit, create jobs and give masses of crisis-weary Slovaks some hope that after years of austerity their living standard would eventually improve remained the real challenge.

After Slovakia’s jobless rate hit a nine-year high, just under 15 percent in the spring, the discussion about the country’s business environment and labour market became edgy. The parliamentary opposition blamed the cancellation of the flat tax, increased income and payroll taxes as well as what they called reduced flexibility in the revised Labour Code, in place since January 2013.

When talking to the Smer party congress, Fico argued that in the first two years of the rule of his government there was no room for improving social standards. However, he said that in the next two years Smer aims to push through more in this area. The 2014 budget counts on a boost in revenues, including increased tax collections, to do this.