Paying Taxes ranking down. Slovakia’s position in the Paying Taxes ranking, which is authored by PwC and the World Bank, worsened compared to last year, with Slovakia currently standing at 102nd place out of 190 countries considered for the ranking. While on average each company makes 20 tax payments and devotes 207 hours of its time to doing so, the overall tax-paying rate in Slovakia dropped from last year’s 47.9 percent to 47.2 percent. 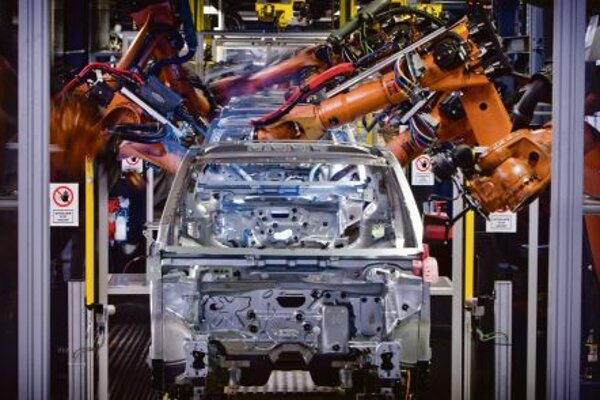 Paying Taxes ranking down. Slovakia’s position in the Paying Taxes ranking, which is authored by PwC and the World Bank, worsened compared to last year, with Slovakia currently standing at 102nd place out of 190 countries considered for the ranking. While on average each company makes 20 tax payments and devotes 207 hours of its time to doing so, the overall tax-paying rate in Slovakia dropped from last year’s 47.9 percent to 47.2 percent.

Work on Slovak-Hungarian gas interconnector goes on. Works on the Slovak side of the natural gas interconnector between Slovakia and Hungary are nearly complete. Eustream Slovak gas transmission system operator and its Hungarian partner Magyar Gáz Tranzit are building the gas pipeline interconnector, which should start commercial operation on January 1, 2015. The planned two-way pipeline will cover a length of approximately 115 kilometres (out of which 94 km is in Hungary and 21 km in Slovakia) and will have an annual transmission capacity of 5 billion cubic metres. It will connect up the high-pressure system located at Veľké Zlievce with the Hungarian transmission network near the village of Vecsés in the Budapest suburbs. The total investment needs are more than €160 million, and financial support envisaged under the EEPR is €30 million.

Youngest mobile operator changes hands. PPF, owned by Czech businessman Petr Kellner, officially confirmed the purchase of the Czech and Slovak branches of the mobile operator Telefónica, which provides telecom services and internet connection under the brand O2. The firm will buy 66-percent of the stock for €2.467 billion from the Spanish mobile operator. The purchase has to be confirmed by regulatory offices.

Deal of the year in retail. The Dutch retail chain Ahold, which operates the Hypernova and Albert stores in Slovakia, agreed with Condorum, a company close to the J&T financial group, over the sale of its stores. The deal still needs approval from the Antimonopoly Office (PMÚ). The whole transaction is expected to conclude in the first half of 2014. Ahold, after closely examining its strategic opportunities, decided to sell its Slovak investments and focus instead on developing its activities in the Czech Republic. The Dutch retail chain operates 24 stores in Slovakia and 283 stores in the Czech Republic. Condorum already operates more than 90 stores under the label Terno and Moja Samoška in Slovakia. If the PMÚ clears the deal, it will result in the creation of the biggest Slovak-owned retail chain in the country.

Volkswagen opens new press shop. Volkswagen Slovakia, the Slovak arm of the German carmaker, opened one most advanced press shops in Europe at its facility in Bratislava. The shop came with a price-tag of €90 million. It produces steel and aluminium parts for the car industry, namely sides, hoods and trunks, roofs, mudguards and doors for SUVs.

Collective bargaining extended. The controversial law on collective bargaining will become effective as of January 1, 2014 after the parliament overrode President Ivan Gašparovič’s veto. The collective bargaining law will extend higher-level collective agreements to all businesses in a given industrial sector, even those that have not signed them individually. Only small firms – defined by the amendment as having up to 20 employees – will be exempt from the obligation. The president said that the measure runs counter to the principle of collective bargaining at the level of individual companies and disregards EU recommendations that the size of a small company should be set at those with up to 50 employees. Opposition parties, the Slovak Democratic and Christian Union-SDKÚ, Christian-Democratic Movement-KDH and Most-Híd challenged the legislation, highly criticised by businesses, with the Constitutional Court.

VAT collection better than expected. The collection of the value added tax in September and October exceeded the government’s expectations. It was €130 million, or one-fifth, higher than what was projected. Economists believe that if government measures are behind the improved result, the credit should go to the national receipt lottery. As of 2014, the government plans to introduce yet another package of measures set to further improve tax collection, paying particular attention to so-called carousel fraud, wherein VAT can be collected on goods and services not rendered. Also, the government wants to introduce an electronic VAT statement and assess the results of the state receipt lottery.

THE YEAR IN BUSINESS