ONE OF the most expensive and controversial public procurements ever undertaken by the Ministry of Defence will finally wrap up in 2014. Began in 2005, the ministry’s agreement with British defence giant BAE Systems for the MOKYS project, a mobile communication system for the armed forces, is likely to come with a final price tag of some €200 million. 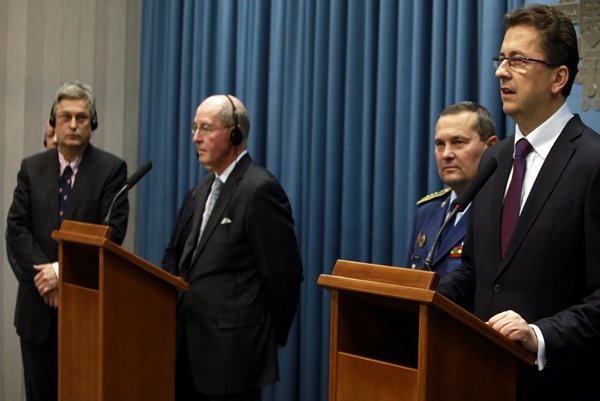 ONE OF the most expensive and controversial public procurements ever undertaken by the Ministry of Defence will finally wrap up in 2014. Began in 2005, the ministry’s agreement with British defence giant BAE Systems for the MOKYS project, a mobile communication system for the armed forces, is likely to come with a final price tag of some €200 million.

As a part of project Defence Ministry allegedly paid several bills for unusable technologies. Police investigators checked the project after former Prime Minister Iveta Radičová filed a criminal motion in January 2012. She described the mobile communication technology as top level, but said radio transmitters and the vehicles that are supposed to carry them during operations are unusable.

Twenty MAN trucks that were purchased as MOKYS carriers cannot be used as they are too large to fit in military transport planes. The army also purchased transmitters that are not compatible with the other technology developed for MOKYS, according to the SITA newswire.

The procurement process had been previously investigated also by the Office for the Fight Against Corruption after former Defence Minister František Kašický filed a complaint saying that the original tender was not transparent. Criminal prosecution was halted in 2008 after the police declared that there was nothing wrong with the tender. Investigators looked into whether the ministry was entitled to make last-minute changes to the contract conditions and decided that the changes were justified, Sme daily wrote.

“When I came to the Defence Ministry MOKYS was unfinished and not operational. I asked a question whether such an ambitious project is realistic, viable and useful for the armed forces under current conditions,” Defence Minister Martin Glváč said in a statement released December 17. “For us, the key issue is that this project, which has drawn large funds, will be fully functional, and we will make the most economical and effective decision.”

Currently, the ministry expects to save around 10 percent of original sum €200 million however the exact sum of saved money will be known at the beginning of 2014, Defence Ministry spokeswoman Martina Balleková told The Slovak Spectator. She added that ministry will keep MAN trucks as they are capable of transporting the whole system but that radio transmitters have yet to be installed.

“We are pleased that we were able to finish the MOKYS system,” BAE SYSTEMS Regional Director for Austria, Poland and Slovakia John Barter said. “It will be the most advanced communication system in NATO.”

The agreement on the MOKYS project is the culmination of the combined efforts of British, German and United States companies, working together to build a defence solution for the Slovak Armed Forces, Mathew Miller of the US Embassy to Bratislava told The Slovak Spectator.

“We are pleased that after two years of being stalled the MOKYS Project is moving forward,” Miller said. “This MOKYS mobile communication system contract represents a transformation of the Slovak Armed Forces and allows Slovakia to field forces with advanced communications capability and NATO interoperability.”

Critics of the project remain, however. Glváč has failed to clearly explain how he will save money on the estimated €200 million and how much, according to a former Defence Minister Ľubomír Galko of Freedom and Solidarity (SaS).

“At the same time he was quiet about principles of alleged dispute settlement,” Galko said, as quoted by the TASR newswire.

According to Radičová, there is legitimate suspicion that the state wasted public money through the several disadvantageous deals sealed at the ministry between 2005 and 2010, a time period when the ministry was under the control of two different governments.

“Every new contract cancelled validity of previous one and increased the [project] price,” Radičová said, as quoted by Sme daily in March 2012. “What those permanent amendments [to the contract] mean and who takes profit from them?”