EDUCATION is the root of almost every major problem in Slovakia from unemployment to racism, says Hana Skljarszka, a 23-year-old sociology student, who now serves as Slovakia’s United Nations Youth Delegate. During her stay at the UN she and some other youth delegates tried to implement theses about the protection of non-heterosexual young people, she said. The Slovak Spectator spoke with Skljarszka about her impressions from the UN, her agenda and her activities as a delegate. 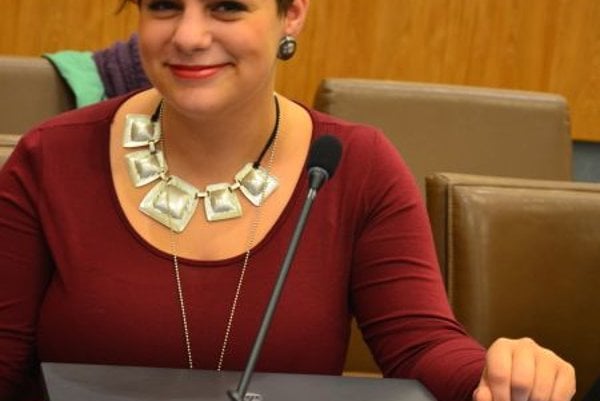 EDUCATION is the root of almost every major problem in Slovakia from unemployment to racism, says Hana Skljarszka, a 23-year-old sociology student, who now serves as Slovakia’s United Nations Youth Delegate. During her stay at the UN she and some other youth delegates tried to implement theses about the protection of non-heterosexual young people, she said. The Slovak Spectator spoke with Skljarszka about her impressions from the UN, her agenda and her activities as a delegate.

The Slovak Spectator (TSS): What does it mean to be the UN Youth Delegate?
Hana Skljarszka (HS): I always say it is divided into two functions. The first is performed abroad, meaning I am the delegate of all young Slovak people to the UN. There I have a chance to talk about their problems and I can fight to solve them. The second function is more important to me. It is when I come back home and try to help young people in Slovakia. Youth delegates should be the voice between the youth and stakeholders who are responsible for youth politics.

However, most of the- time, the situation is hard for youth delegates because right after diplomats learn about their status they treat them with caution. Youth delegates aren’t regular diplomats and have various mandates. The mandate of Belgian or German youth delegates is different from the Slovak delegate’s mandate. However, some delegations were very enthusiastic about the cooperation with so many young people at the UN.

TSS: Could you describe your activities?
HS: I was at the UN for three weeks and then I stayed in New York for a while, attending informal meetings. Basically, I was doing three things. First, I had a speech which was the most important thing to me, but the UN doesn’t consider it very important. Second, I worked on a youth resolution, which is adopted every second year, and I was lucky that I became a delegate in the term when it is adopted. Third, I together with German youth delegates organised a discussion about LGBT rights.

Even though youth delegates don’t have equal diplomatic power in cases where they are united and create an alliance, they can make great things happen. I can say that we had great success because I was in a small group together with several delegates, mostly from Germany, and we were fighting for LGBT rights, which is a big taboo at the UN.

We proposed that the resolution should contain some thoughts about sexual orientation and gender equality and that people should be protected in this area. At the beginning we thought that it would be a revolutionary idea and others would reject it very quickly. But some countries, especially from northern Europe and Latin America, liked it and pushed the proposal further.

Of course, the original wording of our proposal wasn’t accepted since it was too aggressive for the UN and they made it softer. It isn’t very specific, but at least there is an indication of LGBT rights in that resolution.

TSS: What are your impressions from the UN?
HS: I was very critical of the UN. Even when I applied for the youth delegate programme I was open to people deciding about who would be chosen. I told them that the UN is rigid slow system and nothing works there. However, now I see that it isn’t possible to do it in different way and that system is so slow because there are a number of cultures and ideas in one place. Therefore we can’t expect that people will reach a consensus easily. Thanks to the UN we have some women’s rights in the Arab world or at least they are promoted there. It is a process which took 20 years, so it is slow and you need to be there to realise how big UN is and what it takes to reach a consensus.

On the other hand, it is still true that people there are arguing about trivialities and don’t deal with the core of problems, but rather focus just on the surface so no one is offended. Diplomacy there is about the idea that we don’t want to argue but we want to reach consensus. It could be seen even during the discussion about LGBT rights, because some countries don’t accept homosexuality and it is considered a disease. Therefore talking about it was very difficult and the process of reaching a consensus can be frustrating.

TSS: What is your top priority as a youth delegate?
HS: I had a speech at the UN General Assembly about education because I think that it is the main root of for all the major problems Slovaks deal with like racism, social inclusion and unemployment. Simply, everything begins when we start to attend school. Since formal education at elementary and secondary schools disappointed me, I decided that this is something I should talk about.

My idea about how education should look is based on several notions. First, every person has some form of intelligence. Some people see things visually, some through numbers and everyone uses their brain in a different way. Our education system doesn’t reflect this and produces uniform people with uniform information which doesn’t prepare us for the labour market. The current labour market demands flexible people and individual personalities are suppressed by our education system.

Second, our education system doesn’t teach us how to think critically and how to work with information we receive. We have media distorting information or pushing forward ideas which people automatically accept without evaluating. We live in social bubbles which reproduce some values or ideas and we can’t leave them until someone shows us the way.

Therefore I think that change should start at schools, which should show us how to deal with information and various value scales. The world is so complex and people can’t see it when they follow just one repeatedly reproduced value. Our education system should show this to us.

TSS: What are your activities in Slovakia and how are you working to change the education system?
HS: It is a very hard question because it is related to the strength of my mandate. Youth delegates in Slovakia need to improve their recognition by authorities and then they can focus on their work as advocates for young people. Currently, I try to enhance our recognition so I have done various lectures at universities and I definitely am trying to meet some authorities and discuss my agenda with them.

I wish that this mandate would be more respected, because otherwise it is a pointless function. I mean, one shouldn’t bear the title of Youth Delegate without being the voice of the youth, so people should know that this mandate exists and respect it. In the future, my successor should focus on being the opinion leader, not just a doll in the hands of someone else.

But one person can’t change anything. I can meet teachers and tell them what the problem is and that they shall not fear to face it. I can meet students and talk with them about it as well as ask them about their opinion and then encourage them to do something about it. I should be some sort of leader and encourage people to deal with problems we have here, because I can’t change anything on my own. Therefore, my plan for the next half year is to fight for the change in education in as many places as possible.