CARMAKERS in Slovakia set a new record in 2013 with their continued increase in production, despite falling short of producing one million cars. Industry experts see room for more growth, but since carmakers are nearing their maximum output capacity, only the arrival of a new company can significantly boost production. 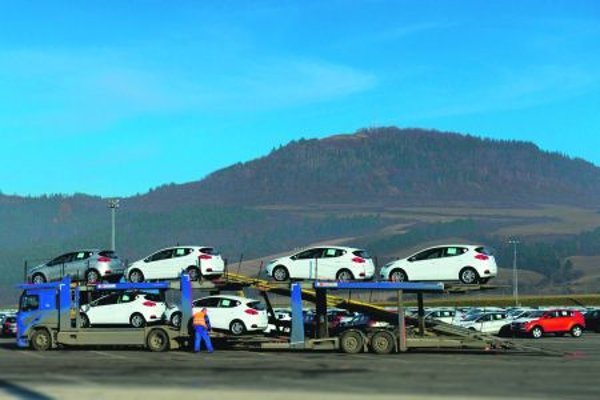 Producing over 980,000 cars in 2013, carmakers in Slovakia upped their production by 5.8 percent compared with the record number set in 2012, when carmakers boosted production by 44.9 percent. Representatives of the Slovak Automotive Industry Association (ZAP) revealed on January 15 the preliminary figures for Slovakia’s car production last year.

“While expectations for Europe indicated a drop in car production in 2013, we had an annual rise of nearly 6 percent,” said ZAP president Jaroslav Holeček, adding that Slovakia, with 181 cars produced per capita, remains at the top of the global car production ranking. Last year this indicator stood at 171 cars.

Thus, the company has already exceeded its official annual production capacity of 300,000 cars.
The Kia Sportage accounted for about half of the total number of vehicles produced, 160,278 cars, the manufacturer informed on January 14. Kia also made 123,016 Kia cee'd (40 percent) cars and 29,706 Kia Vengas (9 percent). It exported most of its cars to Russia (22 percent), Great Britain (13 percent), Germany (9 percent), France (5 percent), Italy (5 percent) and other European countries, Jozef Bačé, a Kia Motors Slovakia (KMS) spokesperson, informed.

PSA Peugeot Citroën in Trnava produced a record 248,405 cars. The company managed to increase its production by 15.5 percent compared to the previous year, in spite of declining car sales in western European markets. The plant manufactured 184,754 Peugeot 208s and 63,651 Citroën C3 Picassos. With almost 60 percent of last year’s production yielding cars with emissions of 119-126 g CO2/km, the plant confirmed its focus on highly ecological technology, said spokesman Peter Švec, as cited by the TASR newswire.

Based on ZAP’s figures, the biggest carmaker in Slovakia, Volkswagen Slovakia in Bratislava, produced over 418,000 cars last year. The plant will reveal its numbers later in the year. In the first half of 2013 it manufactured over 219,500 cars, up 4.8 percent year-on-year. A record number of 419,888 cars rolled off its production lines in 2012.

Car sales in the EU decreased by 1.7 percent to 11.8 million in 2013, according to the European Automobile Manufacturers’ Association (ACEA), continuing a decline for the sixth consecutive year. Compared with 2007 - before the financial crisis - car sales decreased by 27 percent.

In Slovakia, passenger car sales decreased by 4.72 percent in 2013 to 66,000, while ZAP originally expected a steeper drop.

Due to expected changes in models, the aggregate car production of auto manufacturers in Slovakia may be lower in 2014 than in 2013, while only the arrival of a new carmaker would result in a meaningful increase in production.

“It may be that we will not manufacture as many cars [in 2014], because some producers are set to make some changes in car models,” said Holeček, adding that a year-on-year drop in production is only natural in such scenarios. He expects that the figure for 2014 will still be higher than in 2012, i.e. 926,555 vehicles. “We are getting close to maximum output capacity. So a new carmaker would need to come to Slovakia if we were to produce more cars.”

Holeček confirmed that there is interest in Slovakia from carmakers abroad. He considers the country’s eastern regions the most suitable for a new carmaker, as the three manufacturers active in Slovakia are located in western Slovakia. But he sees the still unfinished cross-country highway as an obstacle.

In such negotiations, ZAP is only a consultancy body, through which potential investors inquire about the reasons behind the success of carmakers in Slovakia, while the Slovak cabinet and the Economy Ministry offer stimuli and incentives to potential investors.

According to Holeček, carmakers from Asia might be interested in coming to Slovakia and using the country as a gateway to the rest of Europe. In terms of the types of cars that may be produced in the country, Holeček recalled that Slovakia also has a history of producing trucks and buses.

ZAP sees the qualified labour force and the dense network of subcontractors, with room for their further development, as the main advantages Slovakia can offer.

As for potential investors in the central-European region, US company Tesla Motors and China’s Quoros, which began selling its passenger cars in Slovakia last year, have both been mentioned.

“However, currently none of the projects are in such an advanced stage that would enable us to speak about it,” Economy Minister Tomáš Malatinský said, as cited by the Pravda daily, regarding the potential arrival of a new carmaker in Slovakia.

Industrial and construction production up

Boris Fojtík, analyst with Tatra Banka, pointed out in his memo that the increase in industrial production in November was the highest so far in 2013, which was a pleasant surprise, as there were no signals indicating that Slovakia would see the second fastest increase since the crisis began.

“The domestic sentiment indicator and the growth in neighbouring countries indicated instead stagnation in industrial production growth dynamics,” wrote Fojtík.

According to Andrej Arady, an analyst at VÚB Banka, the positive news from the latest statistics data is that the industry managed to again achieve double-digit growth, which, in contrast to 2012, was more healthily diversified among more sectors.

The construction sector saw good news in November too when it reported its first y/y increase in two years, according to Baláž. In November construction output increased 1.5 percent in annual terms.

“The increase in new domestic construction output was especially behind the growth,” wrote Baláž, adding that sentiment in the construction sector, however, remains negative, and the bottom will be reached only in early 2015.

According to Arady of VÚB, the outlook for now is not very favourable as the weak usage of existing capacities slows private investments, and government investments are curbed by the government’s inclination to save especially via investments.

“But the available information indicates that construction has finally been finding its bottom in the post-crisis period, and it increases the hope for more continuous stabilisation in the construction sector,” wrote Arady.