BRAZIL has a rich, colourful, multi-ethnic culture that seems exotic and unusual compared to Slovakia. At the same time, some of its cultural elements have planted deep roots here, like capoeira, the Brazilian martial art that merges dance, music and acrobatics into a distinctive, playful sport. 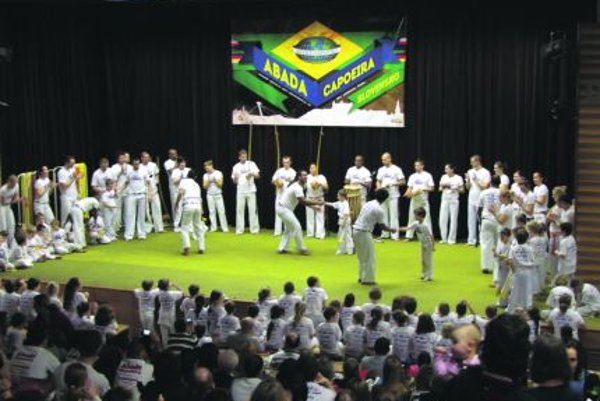 BRAZIL has a rich, colourful, multi-ethnic culture that seems exotic and unusual compared to Slovakia. At the same time, some of its cultural elements have planted deep roots here, like capoeira, the Brazilian martial art that merges dance, music and acrobatics into a distinctive, playful sport.

Other aspects of the country’s culture remain to be discovered and enjoyed by Slovak audiences, and the Brazilian Embassy to Slovakia is helping to spread the word.

“The festival of Brazilian films in 2013 – its first edition – was one of the most appreciated events organised by our embassy (together with the Portuguese Institute),” Susan Kleebank, the Brazilian ambassador, told The Slovak Spectator. “We launched Visual Brazil, the festival in which five Brazilian movies were presented: Lula, Son of Brazil; Vinícius de Moraes; Carandiru; 5x Favela; and The Clown. Around 2,000 people saw these movies in three cities, Bratislava, Košice and Spišská Nová Ves.”

In Bratislava, the film festival took place between February 26 and March 2, 2013, and was opened by Slovak film director Iveta Grófová.

“Brazil is a country full of contrasts, and such is also their art and creative industry,” said Silvia Severíniová, who co-organised the festival through her role at the Portuguese Institute. “It is beautiful, exceptional, full of emotions. It is a pity that Slovak viewers don’t normally get a chance to see films of such a good quality. Our goal was to change this state of affairs and bring these exceptional works here. Thus, we believe that visitors are able to not just enjoy a good impression, but can also bring home with them a bit of Brazil.”

Kleebank was equally excited by the event.

“Since the public’s response was enthusiastic, we plan to repeat the initiative this year, showing different films, probably related to Brazilian music,” she told The Slovak Spectator.

Furthermore, the embassy traditionally supports the Ibero-American Film Festival of Bratislava and the International Film Festival Bratislava, she said. It also supported a special edition of Kinečko, a Slovak cinematography magazine, focused on the Brazilian film industry in February 2013.
Slovakia and Brazil also share Catholicism as their primary religion.

“Regarding the Roman-Catholic Church, in February 2013 I had the pleasure of introducing Brazil in the University Pastoral Centre in Bratislava to 200 young Slovak people, who took part in the country’s delegation to the World Youth Day in Rio de Janeiro in June 2013, with the presence of the Holy Pope, and followed by two million people,” Kleebank said.

Also in June, Kleebank took part in the opening ceremony of a local event in Ružomberok, organised by Catholic Church representatives, with the presence of about 4,000 young people from all over Slovakia and neighbouring countries.

“These experiences were very positive and the embassy remains at their disposal to help in any initiative in this area,” she said.

As for other cultural activities, Kleebank mentioned two art exhibitions – paintings by Judith Klein and an installation by Cesar Meneghetti; and two music presentations (of Brazilian classical music at the Academy of Performing Arts in September and the participation of Celso Machado in the Guitar Festival in June).

Also connected with visual art, but from a slightly different genre, was an interview and presentation by Fernando Serapiao, an architecture critic and journalist – and an exhibition of pictures about Brazilian modernist and contemporary architecture – at the Primate’s Palace and the Design Factory.

“After that, we organised a presentation of architecture at the Faculty of Architecture of the STU; and we also organised a meeting at the embassy with professionals and academics of the area that was very highly esteemed,” Kleebank said. “They encouraged us to go on and to do new activities in this area in the future.”

The Brazilian Embassy also supported the release of a children’s book, “Joaninhas da 5a. B”, about a Brazilian boy at a Slovak school. This was presented during the last Biennial of Illustrations Bratislava in autumn 2013 and distributed afterwards to several schools and libraries that cooperate with the Embassy. The book was bilingual, in both Portuguese and Slovak. For young people and students, six Brazilian film presentations were arranged on Brazilian rainforest protection; four at the auditorium of the embassy and two at the Faculty of Social and Economic Sciences of the Comenius University (for around 500 Slovak students), followed by a drawing competition on this subject. An exhibition of photos about Roma children in Brazil was organised in cooperation with the International House of Art for Children Bibiana, in Bratislava and in Piešťany.

Last but not least, the embassy was involved in the Capoeira Festival in February and a symbolic “baptism” in March.

“We participated in an opening ceremony with Abadá Capoeira Bratislava [which organised the event],” Kleebank said. “ Usually, they have hundreds of people that participate in these ceremonies. The first event that I participated in got about 400 people; they sing and dance and perform the exercise together.”