PLZEŇ-based sculptor František Bálek and a dozen of his assistants built an ice temple at Hrebienok, a small ski resort in the High Tatras, in which he married his fiancée, Dagmar, on December 18. 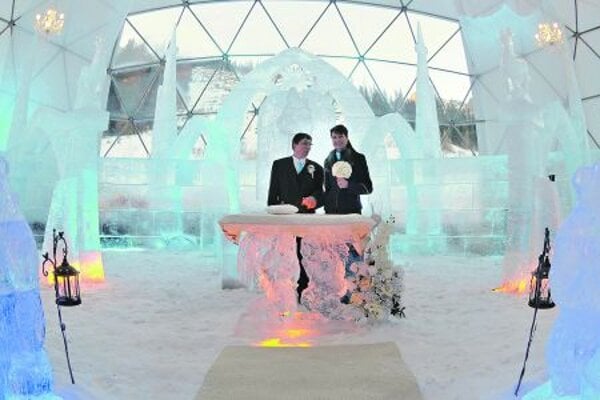 PLZEŇ-based sculptor František Bálek and a dozen of his assistants built an ice temple at Hrebienok, a small ski resort in the High Tatras, in which he married his fiancée, Dagmar, on December 18.

“I am happy that it worked out, that we managed [to build it] and that I was able to say ‘yes’ to my loved one,” Bálek told the TASR newswire. His new wife thanked everyone and stressed that the special moment at the unique place will only seal their marriage and make for a wonderful memory.

The construction of the ice temple required 288 blocks of ice, each weighing 125 kilograms. It took the team of sculptors and assistants two weeks to build the ice temple, the interior of which contains walls and sculptures, including an altar with Madonna and the baby Jesus, edelweiss (a plant native to the mountain region), chamois, bears and benches.

The newlyweds were brought to Hrebienok in an unconventional wedding carriage: “We prepared a funicular especially for this occasion,” said the CEO of the Regional Organisation of Tourism (OOCR) of the High Tatras region, Lenka Maťašovská. “This is the first time ever that a funicular was transformed into a wedding vehicle.”

There was also another ‘first’, according to High Tatras municipal official Ján Mokoš: “I have married many couples, but this wedding was unique,” he said, as quoted by the SITA newswire. “This is the first time that the groom built the wedding venue on his own. I am also glad that the couple won’t take the temple with them, but it will remain an attraction for tourists and all Tatra visitors.”

Due to the unseasonably warm weather, the temple required constant cooling, and unless the weather cools, it remains unclear how long the structure will last.

The temple atop Hrebienok is open to the public daily from 6.30 until 18:30, until the end of the season (or until it melts), with concerts and masses scheduled to take place there (updates can be found at the regiontatry.sk website).

“The wedding was unique and I believe that there might be more couples who would be interested in getting married there – if the ice temple lasts,” Mokoš said, as quoted by SITA. “It was surely one of the least typical places to marry a couple. I have married couples at Lomnický Štít peak, but we have never before had a groom build his own temple to marry in.”