GREETINGS from India’s ‘Land of Spices’, Hungary’s ‘Land of 100 soups’ and Finland’s ‘Land of Lakes’; America suggested ‘eating the colours of the rainbow’, Israel touted its culinary openness, while Greece advised that one ‘cook with love’; a Swiss meal embodied the spirit of its homeland, while the secrets of Indonesian slow-cooking and Korean Kimchi were revealed. These were all part of The Slovak Spectator and TV Sme’s explorations into culinary cultures of the world through the Cooking with Ambassadors programme in 2013. 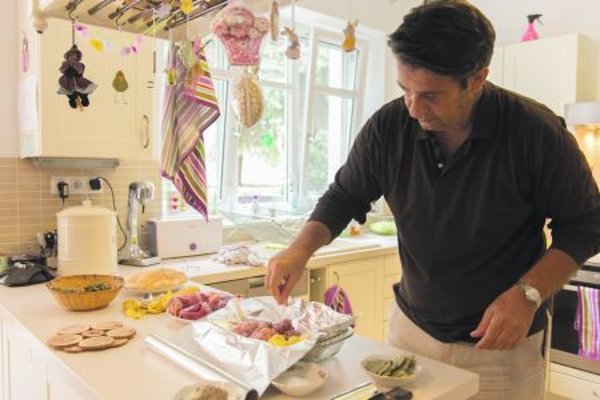 The journey also took a peak at the historical culinary map of Cyprus, visited the food of Portugal - the land of 1,000 fish recipes, and experienced a taste of authentic Italian food - so ‘good for body, purse and health’. Croatia displayed its passion for meat and tradition, Estonia demonstrated that fish rules its table, and Norway, the kingdom of salmon, offered a treat involving the flavourful fish.

Alexander Ben-Zvi, the Israeli ambassador to Slovakia, explained that “there is no typical way how an Israeli looks”, just as there is no typical Israeli food, and picked two dishes that anyone can easily prepare: stuffed green avocados and chicken in an orange-beer marinade.

Since a lunch without soup would be unthinkable for Hungarians, Csaba Balogh, the Hungarian ambassador to Slovakia, prepared sour cherry soup, noting that Hungary has more than 100 types of soups. The menu included a Budapest steak and cottage-cheese balls with strawberry icing.

US ambassador to Slovakia Theodore Sedgwick invited his guests for a “quintessentially American” grilling of a variety of vegetables, pieces of steak and pineapple, explaining that “America is a nation of immigrants, so we have food from all over the world, but what makes the US food unique, is one thing: the grilling process”.

Nicolaos D. Kanellos, the Greek ambassador to Slovakia, suggested that cooking should be understood as an act of love, and served his guests stuffed tomatoes and peppers, tzatziki and ‘trahanas’, which the ambassador called a “Spartan food”.

The Swiss ambassador to Slovakia, Christian Fotsch, prepared fondue, the traditional Swiss dish, which according to him reflects the spirit of Switzerland through its main ingredients - cheese and wine - as well as “the feeling of togetherness” in the way the dish is consumed.

Djumantoro Purwokoputro Purbo, the Indonesian ambassador to Slovakia, divulged the secrets of slow-cooking, while Rajendra Thalib, an established Indonesian chef who was visiting Bratislava, prepared rendang for the programme, as well as gado-gado, a salad consisting of boiled vegetables dressed with a rich peanut sauce.

Finnish chargé d’affaires Henna Knuuttila introduced her homeland’s cuisine with Karjalenpiirakat, or Carelian pie, and Vatruskat, a half-moon shaped pastry made with mashed potatoes and filled with rice.

Sang-Hoon Park had no problems deciding what to select when introducing Korean cuisine to Slovaks: “Kimchi is eaten every day, almost with every meal,” the ambassador of the Republic of Korea explained.

Marios Kountourides, the Cypriot ambassador to Slovakia, prepared Kleftiko, an oven-baked lamb dish with potatoes, explaining that Cypriot cuisine is like a historical map of Cyprus, with “traces of different nations, which emerged throughout the country’s rich and sometimes turbulent history”.

When Portuguese chargé d’affaires Ana Maria Coelho Ribeiro da Silva chose to make codfish with corn and wheat bread for the programme, she emphasised that there are more than 1,000 ways to prepare cod, and that Portugal’s tradition with the fish goes back to the 15th century.

At her Vienna residence, Estonia’s ambassador to Slovakia Eve-Külli Kala prepared Estonian herring dishes, noting that fish is an essential part of her country’s cuisine. To highlight the symbolism behind the dishes, she explained that her family name, Kala, means fish in Estonian.

The Norwegian ambassador to Slovakia, Inga Magistad, offered salmon, one of Norway’s most iconic food products, as well as cod in her menu, explaining that people in her homeland put a lot of emphasis on fish.

The Slovak Spectator and TV Sme would like to thank the diplomats for sharing their culinary traditions with our readers last year.