A SERIES of hastily passed laws seeking to limit the right to protest added fuel to the fire of anti-government protests in the Ukrainian capital Kiev, and after a violent clash with police saw up to five demonstrators killed, the international community, including Ukraine’s western neighbour Slovakia, called for calm. 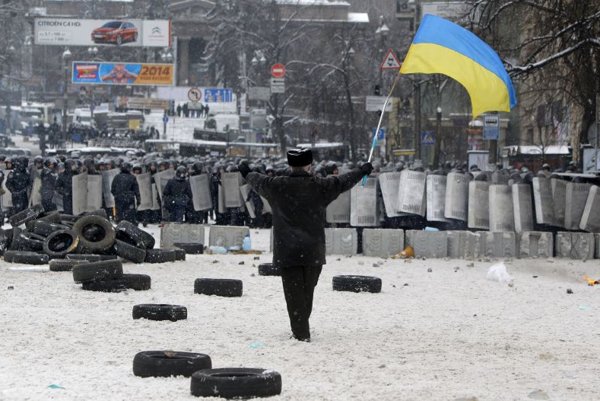 A SERIES of hastily passed laws seeking to limit the right to protest added fuel to the fire of anti-government protests in the Ukrainian capital Kiev, and after a violent clash with police saw up to five demonstrators killed, the international community, including Ukraine’s western neighbour Slovakia, called for calm.

“When blood was shed a red line was crossed,” Foreign Minister Miroslav Lajčák told The Slovak Spectator. “This is not an academic issue for us. We have very actively been supporting a European way for Ukraine.”

The United States has imposed visa restrictions on Ukrainian officials connected to the violence in the wake of allegations that two protesters were shot and killed by security forces. Lajčák said that he imagines the European Union also must act.

“There is a saying that if a leader does not want to listen to his people, he will hear from them,” Lajčák said. “That is exactly what is happening in Ukraine.”

Prime Minister Robert Fico said on January 22 that he was shocked by the developments in Ukraine. He condemned the intervention of specialised security units in Kiev resulting in the death of several demonstrators as unacceptable, noting that Ukraine is Slovakia’s neighbour “with which we have many things in common”.

“I want to appeal to all those involved in the demonstrations to refrain from any violence,” said Fico, as quoted by the SITA newswire, adding that Ukrainian authorities should respect citizens’ right to protest.

According to Fico, dialogue, not force, is needed to quell the tense situation.

Since late November 2013, pro-EU Ukrainians have been protesting in the streets of the country’s cities, spurred by Ukrainian President Viktor Yanukovych’s last-minute decision not to sign the association agreement with the EU. Some observers see pressure from Russia behind his decision and suggest that the crisis has revealed deep divisions in Ukraine between those who lean toward Moscow and those looking westward.

“If one of the wealthiest men of the country, Viktor Yanukovych, is the president in Ukraine and he is backed by one of the most powerful people in the world, Russian President Vladimir Putin, then the public does not have a chance,” Oles Cheresko, a Ukrainian living in Slovakia, told the Sme daily, which addressed several Ukrainians on January 23. Many were sceptical about the eventual success of demonstrators.

Fico was mum on the events in Ukraine until December 3 of last year, when he said that the EU is “so in love with itself” that it is convinced there is no better alternative to it in the world, SITA reported. EU membership is not a religious rule for countries and each country can freely decide whether or not it will join, Fico said, adding that one must look at the offers that have been put in place, such as the lowering of gas prices or projects offered to Ukraine.

“Ukraine simply decided to go another way and I will not judge it now, this is an internal affair [for Ukraine],” Fico said at the time.

But as demonstrations have persisted and confrontations have increased in frequency and intensity, such comments are increasingly seen as out of step with the European mainstream. Events on the ground appear to have make things about much more than whether Ukraine wishes to enter the EU or not.

“If it is proven that it was the government, the police who killed demonstrators, we have to call on those responsible to answer,” Lajčák said. “If the European Union is true to its values, then obviously we cannot remain silent in this gross violation of not only democratic principles, but of the law.”

Beata Balogová contributed to this story