FOR THE founding members of the European Union plus others in the west of the continent, May 24’s European Parliamentary elections are set to be a struggle between the political mainstream and radical or even extremist movements. Slovakia’s issue is rather prosaic in comparison: will voter turnout again be the lowest among all member states? 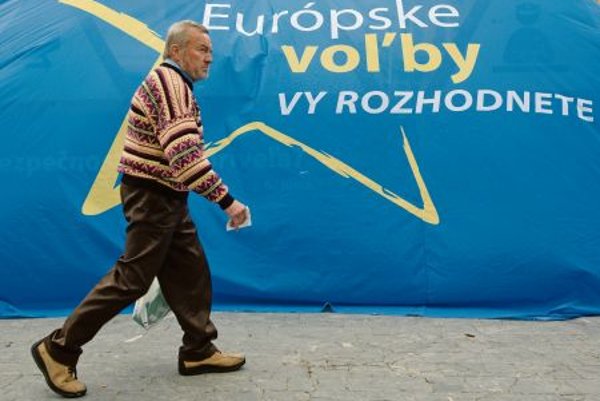 FOR THE founding members of the European Union plus others in the west of the continent, May 24’s European Parliamentary elections are set to be a struggle between the political mainstream and radical or even extremist movements. Slovakia’s issue is rather prosaic in comparison: will voter turnout again be the lowest among all member states?

Slovakia will mark 10 years since in the EU on May 1. Though the anniversary will find the country’s politicians campaigning before the European Parliament (EP) elections it is not likely to receive much attention among the public. Observers blame politicians for ignoring the EP and its agenda, the public of not being aware of what goes on in Brussels, and the media for not paying enough attention to the EU-related topics.

As early as in September 2013, almost nine months before the elections, the European Parliament launched an institutional campaign, trying to motivate EU citizens to turn up to elect their representatives. It is the second time the EP is running such campaign. With the leitmotif slogan ‘Act. React. Impact.’, it mainly unfolds around the website www.elections2014.eu, which the EP launched on December 1, 2013 in all 24 official EU languages. It has however not gotten much response in Slovakia so far.

Given the results of the previous, 2009, elections, Slovaks are among the Europeans most in need of motivation. Back then the election turnout of less than 20 percent landed Slovakia at the bottom of the ranking of EU member states, a position that observers suggest Slovakia is likely to attain again this year too. This might also be aided by the fact that the presidential election, the country’s political event of the year, takes place two and a half months (or even less, if the run-off second round is necessary) before the EP elections.

Vladimír Bilčík, a senior researcher with the Slovak Foreign Policy Association (SFPA) admits that EP elections are not the topic of the day in Slovakia and they will be more intensively discussed only after the presidential election. Still, he does not believe the presidential election will be the main reason for low turnout this year. He ascribes it mainly to the poor efforts of political parties to mobilise voters.

“Parties invest much less time, money, and efforts into these elections,” Bilčík told The Slovak Spectator. “That’s how it has been ever since the first EP elections taking place in Slovakia in 2004.”

Bilčík listed several reasons why parties are reluctant to invest more into the EP elections: there is no financial reward for parties who get seats in the EP, unlike in the national elections where the rewards are quite generous. Also, parties do not see the elections as an opportunity to promote their agenda in the EP.

Ignoring the EP and the topics related to it however portrays the lack of understanding of how powerful a player the EP has become since the Lisbon Treaty became effective in December 2009, observers note.

The Lisbon Treaty gives more powers to the EP in several areas. In lawmaking, the EP was granted the same degree of lawmaking power as the Council in some areas where it used to be merely consulted or not involved at all. In practice, the EP is now involved in almost all lawmaking, according to the EU website. These areas include penal-judicial cooperation, police cooperation, and some aspects of trade policy and agriculture, as well as legal immigration, which is becoming an ever hotter a topic ahead of the elections.

With the Lisbon Treaty, the EP also gets new budget-related responsibilities. The EP must approve the multiannual financial framework for the EU, with the EP now determining all expenditure together with the Council. Also, the EP’s approval is required for all international agreements in fields governed by the ordinary legislative procedure.

“On principle it is still an institution that the European voters and non-voters can rely on in some of the basic issues,” Zuzana Gabrižová, the editor-in-chief of the euractiv.sk portal, wrote in a commentary from 2013. She lists human rights and privacy protection, freedom of movement and freedom to settle down anywhere in the EU among the issues the EP has a say in.

“It is also an EU institution that asks uncomfortable questions to ‘bureaucrats’ from the European Commission and watches the steps of the ministers in the Council, for instance to prevent them from deserting their financial commitments towards the European budget,” Gabrižová wrote.

The European Parliament is the only directly-elected EU institution, which was established to defend the interests of citizens in the decision-making in the EU. The first EU elections were held in 1979. Before that, national parliaments of the members states used to appoint members of the European Parliament (MEPs).

For Slovakia, this will be the third EP election after its accession in 2004.

Election day: May 24, 2014 in Slovakia (the dates differ among member states, between May 22-25). Candidates’ lists to be submitted 65 days prior to the election day.

Election term of the EP: 5 years
Election system: proportional (in Slovakia’s case the same as in the national elections)