THE TAJ Mahal is one of the biggest tourist attractions in India. Nowadays it draws six million tourists annually, of which 30 percent are foreigners. 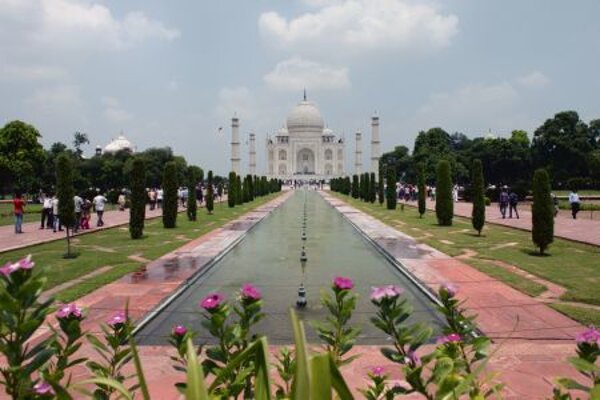 THE TAJ Mahal is one of the biggest tourist attractions in India. Nowadays it draws six million tourists annually, of which 30 percent are foreigners.

The Mughal Emperor Shah Jahan commissioned the complex of structures with the white, domed marble mausoleum to commemorate Mumtaz Mahal, his beloved wife, who died while giving birth to their thirteenth child in 1631. The mausoleum was completed in 1648 and the outlying buildings and gardens were finished five years later. As one of the universally admired masterpieces of the world’s heritage, it was added to the UNESCO World Heritage List in 1983.

Thousands of artisans and craftsmen from India and beyond worked on the complex. The exceptional craft of inlay technique, i.e. using cut and fitted, highly-polished coloured semiprecious stones to create images, was passed down from father to son. Only men are allowed to learn the craft. Nowadays the ninth generation of stone craftsmen live near the Taj Mahal and work in the same way as their predecessors.

Passages from the Quran in black marble decorate the mausoleum and other parts of the complex. The black marble lettering is inlaid into white marble while the size of the letters changes from smaller to bigger so as to be read comfortably from below.

The complex follows a strict bilateral symmetry, with the mausoleum containing the tombs and four minarets as its central structure. This is flanked by a mosque and an assembly hall. There is only one break in the symmetry – Mumtaz’s false sarcophagus in the middle of the mausoleum, while the sarcophagus of Shah Jahan next to it. The actual graves are located in a lower level of the tomb chamber.

The mausoleum is made from white translucent Indian marble, giving it a different colour during each part of the day. It is open from sunrise to sunset, except Fridays, with special visits available during a full moon.