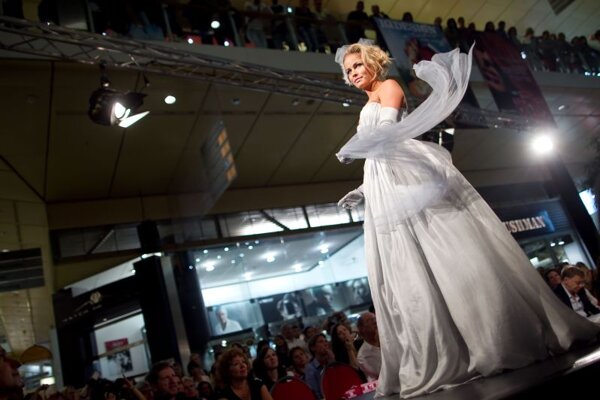 Even young designers can make it into the shows. (Source: Sme)
Font size:A-|A+0

SURVIVAL is the biggest challenge for Slovakia’s fashion industry, say designers, with recent graduates and young people struggling the most. However, awareness within the fashion community is leading to opportunities for young people to present and, eventually, sell their models.

The fashion design community is divided into two groups, Júlia Sabová, the head of Department of Textile Design at the Academy of Fine Arts and Design, told The Slovak Spectator. The first is very popular and enjoys media attention, while a second consists of equally talented but as yet unknown designers. She added that the media spoils the image of Slovak fashion by presenting mainly fashion shows, which serve more as a presentation of well-known public figures than a show focused on quality designs.

The real fashion business is something different from fancy pictures and the small Slovak market means that designers must go to extraordinary lengths to sustain their own brand. There are no big fashion firms in Slovakia, while there are plenty of designers looking for work, Miriam Iglárová, the guarantor of the fashion design field of study at the Secondary Vocational School of Samuel Mikovíny in Banská Štiavnica, told The Slovak Spectator.

This shortage of work has led many of the top talents to look elsewhere.

“Skilled graduates of art schools often work abroad since they would not find a job in their branch in Slovakia,” Michaela Bednárová, textile designer and founder of Puojd fashion design brand, told The Slovak Spectator.

Bratislavské módne dni (Bratislava Fashion Days) and Bratislava Fashion Week are among the best known fashion events in Slovakia. The tight margins on even these flagship events were evident as the 2013 incarnation of Bratislava Fashion Week had to be cancelled after a crucial sponsor from the Czech Republic fell through. In an effort to find an alternative, some designers together with the Slovak Fashion Council (SFC), the professional organisation, and OLO-dressing, a joint fashion project of Czech designers, created Fashion Live.

Dana Kleinert, a fashion and textile designer and one of the SFC’s founders, considers Fashion Live a great success for Slovak fashion. In contrast to most celebrity-driven fashion events, Fashion Live offered opportunities for producers to sell their goods and organised lectures for young designers, Kleinert told The Slovak Spectator.

“At the beginning it looked really bad that we are not able to make an event, but it [Fashion Live] turned to be the best event in Slovakia in terms of professionalising fashion,” Kleinert said. “There were showrooms, business contracts and the fashion was sold there.”

Some 34 designers presented their designs and were able to sell their goods for several thousand euros. Four brands were contracted to produce for shops in Prague, while another four started negotiations on doing so, Kleinert said. Foreign professionals from the fashion industry shared their knowledge.

As established Slovak fashion designers and event organisers realise the importance of experience, they often provide the opportunity for young designers to work for them or present their models in fashion shows, Iglárová said.

One designer who runs her own studio is Lýdia Eckhardt, who has been one of the best-known faces in Slovakia’s fashion industry for 23 years. In November 2013, she hosted the Lýdia Eckhardt and Young Talents event supporting a young fashion designer, several confectioners, cooks and alcoholic beverage producers.

“I decided to help young artists and businessmen because I realise how hard it is [to run a business] in our small market, especially for young unknown artists,” Eckhardt told The Slovak Spectator. “Many people helped me when I started so I want to return something in this way.”

Eckhardt noted that she grew up in the communist era, during which private businesses were a taboo. After the regime collapsed, she decided to open a salon in 1991 and hired 10 employees.

“I struggled financially during the first five years – how to get money for wages; I could not understand why the employer has to pay payroll taxes, pay for holidays, or pay for meal vouchers,” Eckhardt said. “I [was prepared to] close the salon every day!”

“That is why I do not want to accept many people to my courses, just three or four per class, because I do not want to mass-produce designers,” Sabová said. “I feel sorry for them when they are unable to find a job.”

Despite the tough business climate there are some brands and shops of young designers which were able to find their customers and gain attention. Sabová mentioned designer Lenka Sršňová, who organises creative presentations with live music – which is unconventional in Slovakia – and Andrea Paldan, who produces fashion for golfers.

Another interesting project is the Sashe website of Saša Šmidáková, which groups handmade craft-makers and fashion designers, providing a platform to present and sell their products, Iglárová said. Iglárová also pointed to the Bednárová’s Puojd brand, which works with Slovak national symbols and use them as patterns for clothes, gifts and souvenirs, Iglárová said.

Such progress blazes a trail for those who come next.

“Our generation brought a breakthrough in the fashion business and therefore we are creating better environment for future generations,” Bednárová said.

To Sochi with love

FOLK patterns, hearts and words from the national anthem will adorn the uniforms of Slovak athletes at the Winter Olympic Games in Sochi, Russia, set to run from February 7 to 23.
The main motif of Slovak attire will be based on a traditional folk pattern originating from the village of Čičmany in northern Slovakia.

“We want to continue [using the] folk traditions and motifs of our cultural heritage,” František Chmelár, the head of the Slovak Olympic Committee (SOV), said in a released statement.

The collection consists of three models for men and three for women. The first outfit is meant for the ceremonial vow to be taken in front of President Ivan Gašparovič and consists of a red or blue sweater, black trousers and a dark-blue t-shirt.

A second model will be used during the opening ceremonial. The women’s attire consists of a black and white outer jacket, white warm-up pants, white soft-shell jacket, black turtleneck, cap, gloves and scarf. The men’s model is similar with the colour scheme slightly altered.

The third outfit has been designated as “medals clothing” and consists of a black and white outer jacket, soft-shell trousers, a long sleeve t-shirt, vest, headband, gloves and cravat with Čičmany pattern.

“The SOV staff for Sochi Olympics had a very difficult task choosing the proper type of clothes considering the temperature differences there,” Janka Gantnerová, the leader of Slovak Olympic delegation, told the TASR newswire. “It will be 14 to 20 degrees Celsius close to the sea and from 0 to -10 degrees Celsius in the mountains.”

After four years, the national hockey team changed its attire, which will now bear the words of the Slovak national anthem. The uniforms are white and blue, according to the SITA newswire.

“It was a great feeling to wear this beautiful uniform,” left winger Milan Bartovič said, as quoted by SITA. “I feel very positively about it; the anthem on the uniform is a great idea.”