Ample fun for all the family

It is mid-afternoon in early April and on the banks of the Danube in the centre of Bratislava there is a hive of joyful activity. Children are running in and out of what resembles a huge nose-shaped play-house or busily searching the area for other undiscovered exhibits. 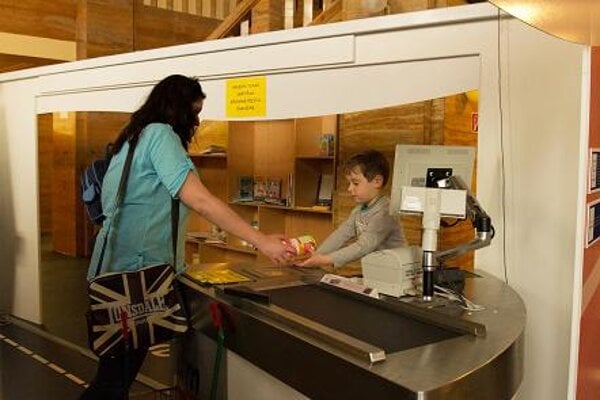 It is mid-afternoon in early April and on the banks of the Danube in the centre of Bratislava there is a hive of joyful activity. Children are running in and out of what resembles a huge nose-shaped play-house or busily searching the area for other undiscovered exhibits.

Six-year-old Nina Sudovská and her older brother Maťo are visiting the Children’s Museum, part of the Slovak National Museum (SNM), for the first time. They are enjoying one of Bratislava’s unique attractions designed specifically to combine fun and education for the younger visitor.

“I like it so much,” said Nina. “I was in the mouth and in the nose, I was everywhere. It was fun. Now I am going to sing in the ear to destroy a bad bacteria.” She promptly disappeared inside a huge ear, comprising part of an exhibition entitled “Me and My Body”.

The Children’s Museum is the only one of its kind in Slovakia, and has successfully managed to provide a safe and enjoyable environment for children and their parents to learn in a creative way. Andrea Sudovská, Nina and Maťo’s mother said: “It is very educative and also very nice”.

Children are encouraged to interact with the exhibits - they can touch everything - and as a result begin a positive relationship with museums, that in the past have often repelled them.

A few streets away, near to the SNP Bridge, is Bibiana, the International House of Art for Children, whose stated purpose is to develop a sense of arts and culture in the young. The gallery hosts interactive exhibitions, theatre shows and creative workshops, and is packed with fantasy and creativity around every corner. Its playfully-painted entrance hall leads to a winter wonderland on the ground floor and upstairs into a gallery space filled with games involving food. Families are encouraged by the unusual exhibitions to make ordinary things interesting and amazing.

“It is nicely created for children; in fact it is all about children,” said the mother of 11-year-old Alexandra, who was excitedly trying on a costume of Cleopatra. “Bibiana is a very good way to spend time with children. I often visit with my daughter.”

Bibiana is also behind the regular Biennial of Illustrations, Biennial of Animation and the Slovak IBBY (International Board on Books for Young People), a series of exhibitions and festivals showcasing art and animation specifically for children.

Children are also encouraged to the Atlantis Science Centre, on Brečtanová Street, in Koliba. This unique experience centre allows children and their parents to have fun while learning about various aspects of science, all amid the wonderful surroundings of the forest in the Small Carpathians.

On a recent visit, 10-year-old Laura bounded down the corridor, insisting: “The bubbles are amazing, you have to see those bubbles.” She was referring to one of numerous exhibits at the centre, which finds a fun way to teach scientific principles to children as young as three.

The Atlantis Centre also includes a mini zoo and a Pharaoh Museum, where children are invited to discover the mysteries of the ancient Egyptians, including the process of mummification.

About 20 minutes walk further up the hill, either via the road or the hiking path indicated by a green sign, is Lanoland Ropes Course, Koliba. It is an adventure playground that has grown in popularity year on year and provides entertainment for adults and children alike.

The ropes course consists of five tracks through the trees – a combination of bridges, zip lines and swings – that vary in difficulty according to age and ability of the visitors. There is a “ground” track for the youngest children, then a “blue” course, which means light intensity and is one of the most popular tracks here. The difficulty gradually increases through the red, medium intensity course, through a yellow “team” track designed primarily for couples and the most difficult “black” track, recommended only for the most proficient and athletic visitors.

Children can also get a lot out of a visit to some of the region’s most notable historical sites, including the recently-renovated Bratislava Castle, which houses History Museum of SNM. Similarly, the 13th century Red Stone Castle (Červený Kameň), near to the village of Častá is well known for its historical festivals, with falconry displays and actors in period dress.

Just across the borders with Austria is the beautiful baroque castle Schloss Hof, commissioned by Prince Eugene of Savoy. Meanwhile, Roman times are remembered at the historical exhibitions in Gerulata, near Rusovce, and the Archaeological Park Carnuntum, a few kilometres further from the Slovak-Austrian border.

When it all gets too much, you may wish to take the children to one of numerous spa and wellness complexes, which allow adults to relax in the healing waters while the kids can enjoy pools, slides and wave machines. Aquapark Senec, situated about 30km from Bratislava, is one of the biggest in the country, offering countless attractions for everyone. Meanwhile in Bratislava itself, Hotel Nivy has a selection of pools and saunas in its wellness area, and you can also stay overnight.

Finally, Bratislava Zoo, in the Karlova Ves district of the city, offers a decent respite from the bustle, despite its location beside a motorway. Originally opened in 1960, it is by no means as bleak a place as might be feared. Instead, the animal species, including white tigers, bears, giraffes and the ever-amusing meerkats, enjoy sizeable enclosures and a remarkably clean environment. An exhibition of dinosaurs among the existent animals is slightly confusing, but is an agreeable boon for the younger generation of dino-lovers.

Outside the city, but still in the region, children can experience direct contact with domestic animals in places such as Aboland near Lozorno or Biofarma near Stupava.