LIMITING media accreditations; a ban on photographing the personal items of MPs; limited access to certain parts of the parliament; and electronic doors to separate journalists from deputies in the parliament are all part of new rules for managing the press recently sent to editorial offices. The changes have struck a raw nerve with the media, as critics have called it a limit on press freedom reminiscent of communist times. 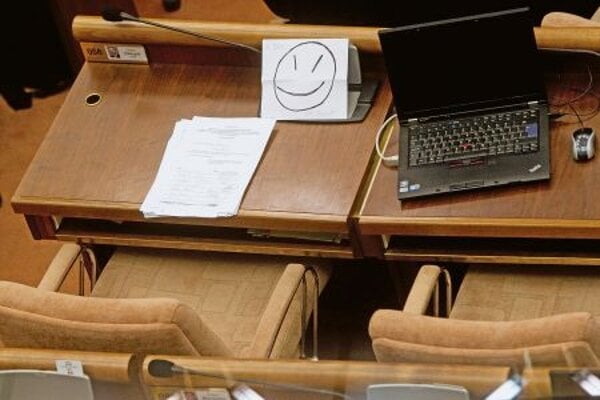 LIMITING media accreditations; a ban on photographing the personal items of MPs; limited access to certain parts of the parliament; and electronic doors to separate journalists from deputies in the parliament are all part of new rules for managing the press recently sent to editorial offices. The changes have struck a raw nerve with the media, as critics have called it a limit on press freedom reminiscent of communist times.

While the backlash has raised the possibility that some of the new rules may be relaxed, the opposition has collected enough signatures to summon a special parliamentary session with the intention of sacking Speaker of Parliament Pavol Paška, a largely symbolic initiative given the parliamentary majority held by Paška’s Smer party.

The new rules will influence the work of journalists, Pavol Múdry, chairman of the board of directors of the International Press Institute (IPI) Slovakia, told The Slovak Spectator.

“Under these conditions they do not even have to go to parliament, it will be enough to watch a live broadcast from the debate hall and write their stories from the editorial offices,” he said.
Prime Minister Robert Fico did back Paška’s rules regulating the media on January 30.

“If I remember the number well, there were 280 journalists accredited for parliament and there aren’t that many of you,” Fico told the press as quoted by the SITA newswire. It should not be possible for anyone who “has at home a small TV set and small camera to pretend that they are a big journalist and be striding around parliament,” he added.
Fico also said that the media have distorted Paška’s words.

In recent months there have been press reports raising suspicions of excessive alcohol consumption while parliament is in session. There was also a series of alleged physical attacks involving members of parliament as well as a Smer deputy caught distributing instructions written on little pieces of paper on how to vote among his party colleagues. The Office of the Speaker of Parliament denies any efforts to discipline the journalists and argues that the rules are here to improve work conditions.

Journalists will be forced out of certain rooms, and will only be allowed in the lobby, the room in front of the parliamentary hall, the balcony and a small room for reporters. They will be allowed to attend the sessions of parliamentary committees, which are public, but only if accompanied by security guards. Journalists are forbidden from taking pictures of what MPs are doing, and of “their personal belongings”, instructions originally disseminated by the Paška’s office on January 24.

The rules also included a limit on the number of accredited journalists from each media outlet. For example, no more than three journalists from a daily newspaper will be permitted to enter parliament. However, the Sme daily reported that the office might agree to increase this limit.

An assigned employee of parliament will be entitled, if instructed by the person chairing a session, to reprimand or remove any journalist who violates the new rules, or if there is an assumption that the session might be disturbed, SITA reported.

People from the media should not disturb the dignity of the parliamentary debate, the speaker’s office said in its release about the rules, suggesting that if journalists break the new rules, which are effective February 15, they will lose their accreditation for parliament.

According to Múdry, an effort by elected officials “to pretend that they are something more than the voters who voted for them” unfortunately can be seen everywhere in the world.

“Yet, they are elected citizens paid from taxpayers’ money,” Múdry told The Slovak Spectator. “Speaker of Parliament Paška chose the easier but wrong option: instead of trying to cultivate the behaviour and work of the deputies, he has rather hidden them from the sight of the public.”

Yet, Múdry even suggests that journalists should perhaps react by not going to parliament at all and write only about passed laws or unpassed drafts. He however added that under these conditions “they cannot perform their role of controlling elected officials”.

Tamara Valková, the chairwoman of the Slovak Syndicate of Journalists, considers the limited access to parliamentary committee sessions as the most detrimental of the new rules, SITA reported. Valková argued that at any time the assigned escort could suddenly be unavailable and the journalists would not have access to the session and, thus, information.

“The sessions of the committee as well as the parliament itself are public, just as the building of parliament is a public space, where not only journalists but also the public should have access,” Valková said.

Valková also noted that in case of EU countries, journalists mostly have free movement in parliament, except into individual offices.

The new rules will not limit the work of the media, argued Daniel Guspan, head of the parliament office.

“As far as movement in parliament, no limitations have been made but a small one,” Guspan told the TASR newswire.

Guspan does not see a problem with the rule allowing journalists to attend sessions of parliamentary committees, which are open to the public, only if accompanied by security, arguing that the press will not be limited in how they cover the sessions. The only change is that before journalists were able to enter the sessions on their own, now they will have to be accompanied by an assigned person, mostly interns, he said.

As for the ban on recording the personal items of deputies on the discussion hall table, Guspan said that journalists will not be restricted from making recordings there: “However, my opinion is that everyone is entitled to privacy and the notes the deputies bring are personal belongings and should remain their personal items”.

According to Guspan, journalists will no longer have access to the parliament buffet, though he added that a new press centre is being prepared for them, as “we are trying to improve the conditions for the work of journalists”.

According to Sme, changing parliamentary access will cost more than €16,000.

Meanwhile, Jozef Viskupič, a deputy of Ordinary People and Independent Personalities (OĽaNO), has collected a sufficient number of MP signatures to call a parliamentary session to discuss sacking Paška. If the parliament’s office does not back out from the restrictions, he will move forward with such efforts, he told TASR.

The parliament’s media committee failed to discuss the new rules on January 27, as proposed by committee member Daniel Krajcer of the opposition NOVA party. The committee voted down his proposal. Committee Chairman Dušan Jarjabek said that the committee should discuss things that have already happened, as reported by SITA, while adding that this is not a conflict of “journalists versus deputies of the coalition”.

When asked about the justifications for the stricter rules, Vladimír Faič, one of Prime Minister Robert Fico’s top advisors, told Sme that he has had negative experiences with journalists: “They were chasing me”.

When invited to speculate about the motivations behind the changes, Múdry said that it could be the desire to have “positive, even if limited, coverage”.

“It seems that Mr Paška cannot handle the deputies and thus he decided to improve the image of parliament by making sure that journalists will practically not make it to the sessions of the committees, and thus they will not inform negatively about the unsophisticated debates of the deputies,” Múdry said.