PARADOXICALLY, a Russian-born biathlete is Slovakia’s biggest hope to bring home a medal from the Winter Olympic Games to take place in the Russian city of Sochi from February 7 to 23. Anastazia Kuzmina is among the 62 athletes representing the country, while estimated costs for sending the team to Sochi will reach €1.37 million. 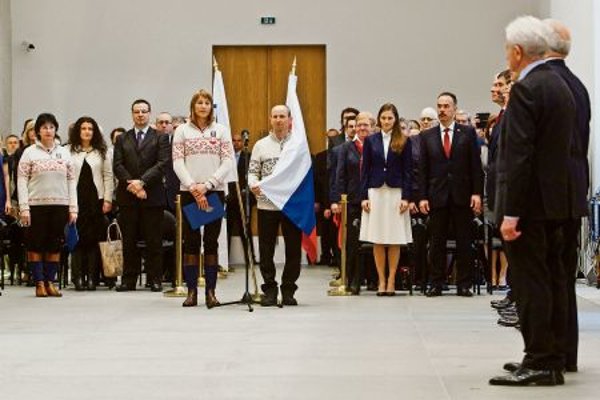 PARADOXICALLY, a Russian-born biathlete is Slovakia’s biggest hope to bring home a medal from the Winter Olympic Games to take place in the Russian city of Sochi from February 7 to 23. Anastazia Kuzmina is among the 62 athletes representing the country, while estimated costs for sending the team to Sochi will reach €1.37 million.

The humble goal is to achieve the same number of medals as in the last Winter Olympics in Vancouver, Slovak Olympic Committee (SOV) Secretary General Jozef Liba said.

“It would be great to again bring one gold, one silver and one bronze medal, together with some good achievements among the first 10 positions,” Liba said, as quoted by TA3 news channel. “I cannot say that it would be a disappointment if we bring less.”

Of the total cost for the participation of Slovak athletes in the 2014 Olympic and Paralympic Games, the state will cover €980,000. A document drafted by the Education Ministry and approved by the government in August 2013 estimated that costs for the Slovak team at the Sochi games will amount to €696,200, with €424,700 coming directly from state coffers. More specifically, participation in the Winter Paralympic Games in Russia will cost €670,300, with the state covering €555,300, the TASR newswire quoted from the document.

Liba said that considering all the preparations for Sochi, which took four years, the overall expenditures reach around €3.4 million, according to TA3.

The Slovak delegation consisting of 45 men and 17 women, as well as their guests, will be able to celebrate their Olympic achievements in a special area of Sochi’s newly-built railway station, called the Slovak Point. The firm Tatravagónka is providing funding for the space, Ľubomír Souček, the SOV spokesperson, told The Slovak Spectator. Tatravagónka offered the place after SOV stated that it could not afford the rent for a Slovak National Hospitality House in Sochi.

A few days before the SOV executive committee approved the delegation on January 27, a four-member men’s bobsled team made it into the delegation, according to the SOV. There is also a chance that ice dance couple Lukáš Csölley and Federica Testa will take part in the games too.

The Hospodárske Noviny daily reported in its January 14 issue that the SOV cannot afford to pay for the so-called Olympic House as the rent is too high and there was no interest by sponsors to support the project.

There was a threat that for the first time in the 20-year history of independent Slovakia the country would not have an official representative house at the Olympics.

“There will be no Slovak House in Sochi,” Souček told Hospodárske Noviny on January 14, explaining that the committee found the price offers unacceptable when Russian organisers demanded several times more than the €565,000 the London organisers asked for in 2012 to rent the space.

However, the daily later wrote that owners of Tatravagónka firm Alexej Beljajev and Michal Lazar intervened and reportedly found a suitable space in the railway station. The Roko ad agency will be responsible for arranging the representation spaces and the SOV will pay nothing, Souček said.

Olympic personnel in several countries have received an identical email alerting them to a potential terrorist threat in Sochi. The SOV confirmed it received a message in English on January 22 threatening the Slovak Olympic team. The SOV informed Slovak authorities about it and published an International Olympic Committee (IOC) response to the situation, according to an SOV press release.

“The IOC takes security very seriously and passes on any credible information to the relevant security services,” it said in a statement. “However, in this case it seems like the email sent to a number of NOCs [national Olympic committees] contains no threat and appears to be a random message from a member of the public.”

Still, there are fears of a possible terrorist attack during every Olympic Games. Continued instability in Russia’s Caucasus region further increases that threat, according to Souček.

“We can only hope that Russia will take care of the Olympic Games visitors’ security,” Souček said.

The Sochi Olympics should be the most secure sporting event in history, according to Hospodárske Noviny. Around 100,000 people will work as security during the games, including 40,000 police officers, double the number at London’s recent summer games. Moreover, around 30,000 soldiers will patrol the Sochi area together with another 10,000 soldiers who will take position on the mountains close to Sochi where some events will take place.
To many analysts, though, the threat is real.

“It is a unique opportunity for them [terrorists] to draw attention to themselves, their problems and demands,” said Ivo Samson, head of the Institute for Defence and Security Studies at the Defence Ministry, as quoted by Hospodárske Noviny.

Several high-profile international leaders have declined to attend the games in protest of Russian human rights policies, like the recently passed legislation perceived as discriminatory against homosexuals. Slovak President Ivan Gašparovič will go to the delight of SOV, SITA reported.

“We [SOV] see it as an expression of respect towards Slovak athletes, Olympic ideals and the games’ organisers,” SOV President František Chmelár said, as quoted by SITA.
Souček added that every country hosting the Olympics deals with political disagreements.

Firstly, though, “the Olympic Games is a sporting event that should bring people and nations closer,” he said.