CAROUSEL fraud, a form of VAT evasion which can involve a company sending empty trucks or transporting goods in personal cars through border crossings, has become quite common in Slovakia. The Sme daily calculated that the state loses more than €200 million in VAT to carousel fraud each year. 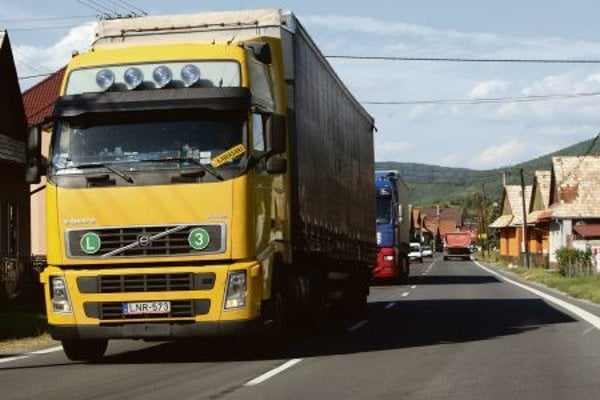 The state will be weighing trucks. (Source: SME)
Font size:A-|A+

CAROUSEL fraud, a form of VAT evasion which can involve a company sending empty trucks or transporting goods in personal cars through border crossings, has become quite common in Slovakia. The Sme daily calculated that the state loses more than €200 million in VAT to carousel fraud each year.

In cases of carousel fraud, the fraudster charges VAT on goods in a multi-jurisdictional transaction without paying the tax owed to the state. Such schemes often involve transactions of agricultural products, like grain, sugar and sunflower oil, as well as mobile phones.

Though the authorities admit that detecting carousel fraud can be time-consuming, the Transport Ministry and the Financial Administration (FS) said they will use weigh-in-motion scales, devices that record the axle weight and gross weight of a vehicle in motion. This will make it easier to uncover fraud and determine whether a vehicle is empty when according to official records it should contain goods being transported abroad.

The new system is expected to be implemented by the end of the year.

The FS reviewed 3,900 invoices and transports worth €350 million in VAT that went from Slovakia to Poland, Hungary and the Czech Republic last year, Daniel Čech, head of the tax and customs department of the FS, told the press on January 28. Čech expects that the new system will enable them to detect fraud more effectively by expediting the time it takes to do so.

“The project of weigh-in-motion scales is something that could increase the level of evidence at the disposal of the Financial Administration to prove carousel fraud,” Čech added.

Čech explained to The Slovak Spectator that when the FS reviews a business transaction between Slovakia and another European country, they usually ask for tax reports from abroad, and also reports from the toll system, to check whether the goods actually left Slovakia and were delivered to the end recipient. Thanks to the information from the weigh-in-motion scales, which the FS will access online, they will now be able to determine whether a truck declared as full is actually full or empty, he added.

Within a package of measures created to curb tax evasion and regulate truck routes, introduced by the Transport Ministry and the FS to the press, there is also a plan to reduce the number of border crossings that can be used by trucks. All of these crossings will have toll gates equipped with weigh-in-motion scales.

Moreover, the ministry and the FS are proposing changes to the legislation, especially regarding the strict liability. This means that the person who loaded the truck, rather than the driver, will be penalised. They also propose granting the FS more authority to weigh and inspect vehicles, Viktor Stromček, the state secretary of the Transport Ministry, told the press.

How will it work?

The weigh-in-motion scales are composed of two parts, the first of which is built into the road and measures the resistance of the vehicle in terms of its speed. Based on this resistance, the device calculates the approximate weight of the truck. It then sends the information to a device in the toll gate, which takes a picture of the truck and its licence plate. The information will then be sent into the toll system.

Slovakia currently uses 48 weigh-in-motion scales, but will acquire at least 14 more to cover all truck border crossings. The scales will also weigh trucks on sections of highways currently under construction, Stromček told the press. One such device costs about €200,000, the Hospodárske Noviny daily wrote.

Moreover, it will be necessary to install the scales in existing toll gates, Stromček added.

Weigh-in-motion scales have a big advantage over static scales, which can only calculate a vehicle’s weight when it is stopped, said Ľubomír Palčák from the Research Institute of Transport. Although the scales are known to have calibration problems and the final weight calculation is off by about 5 percent, they are still an effective means of detecting tax fraud, since they only have to determine whether or not a truck is empty, he told The Slovak Spectator.

“If we install weigh-in-motion scales at the toll gates, we will be able to cover a lot of trucks and have the information we need,” Palčák said.

Carousel fraud flourished in Slovakia after Hungary implemented the so-called reverse charge mechanism in 2012, Čech told The Slovak Spectator. It requires the VAT to be paid by the end recipient and not the supplier of the transported goods.

As Slovakia intends to implement the scheme soon, Čech expects that carousel fraud will move to other neighbouring countries.