AHMED Haggagovic claims that by travelling he is fulfilling his childhood dream. But he has also made travelling his career, as his TV show was the most-viewed travel programme and reality show in the Middle East last year. 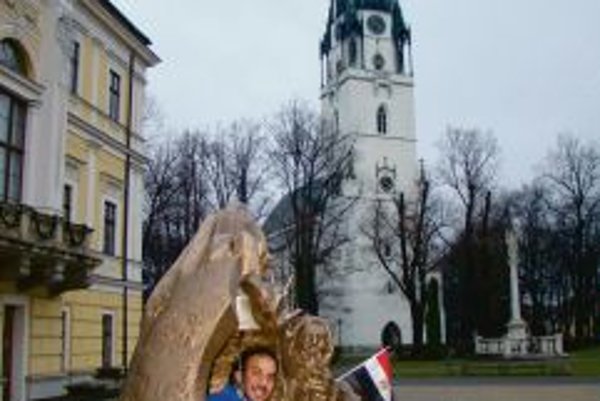 AHMED Haggagovic claims that by travelling he is fulfilling his childhood dream. But he has also made travelling his career, as his TV show was the most-viewed travel programme and reality show in the Middle East last year.

In mid-January Haggagovic and his show paid a visit to Slovakia. He visited Bratislava where he held a speech at Comenius University, met Mayor Milan Ftáčnik and political, academic and public personalities. He also went to Spišská Nová Ves in the east of the country, to the Spiš Castle, the village of Smižany and the High Tatra mountains.

“I am not travelling just for myself, to have fun and collect memories; I am travelling to break stereotyping, to show people and the real things in every country, to break the borders for people, prejudices about religions and politics,” Haggagovic told The Slovak Spectator. “I don’t have any political or religious views, because I believe – and this is from history – for example for Egypt, the way to become a developed and good country is to unite regardless of religion, for people to treat each other in a respectful way, and to rely on youth.”

Slovakia is part of his European tour, and is the 111th country he has visited since he started pursuing his dream of visiting every country in the world in 2007.

“I sold my home, I sold my car, and I began my travels in South America, collecting money,” he said. “I am really passionate about travelling and I put every penny I have into it; but I tried once, twice, many times, many people tried to stop me or didn’t support me when they could have, but I never gave up.”

Haggagovic said that people asked him to become the next minister of tourism of his country – he is presently 29-years-old and thus would be the youngest ever – and although he would not have considered it some time ago, as it would keep him from travelling, now he is seriously considering the possibility.

“Now, in 2014, when things are changing, I would really love to [be a minister], because I really want to benefit my country – and I know how to promote my homeland outside and get more people to travel to Egypt...”

Haggagovic visited Slovakia from January 16-19, before moving on to Croatia.

“I am doing something which works both ways: I am promoting my country, and I am also promoting the country I am going to, thanks to my TV show,” Haggagovic continued. “Now everyone would like to see Slovakia; and on the other side, Slovaks would like to see their country through my eyes. Slovaks also like to see an Egyptian and talk to him – they don’t know if we are terrorists, or we are desert nomads with camels.”