FOR A brief period around Christmas, the wooden altar of St James’ Church in Levoča - the famous work by Master Paul of Levoča and the tallest Gothic wooden altar in the world – was made accessible to the public. After being covered in scaffolding for a year, the first phase of the altar’s renewal was completed in early December. 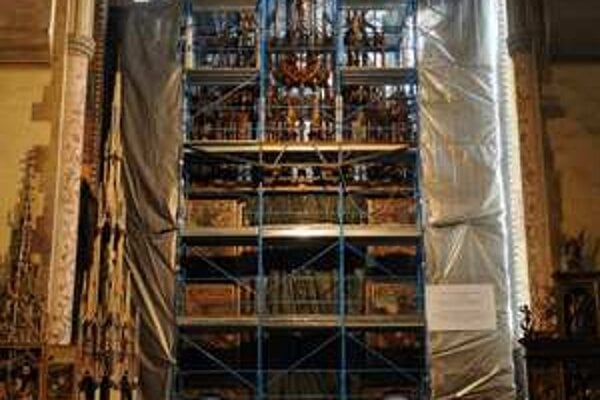 FOR A brief period around Christmas, the wooden altar of St James’ Church in Levoča - the famous work by Master Paul of Levoča and the tallest Gothic wooden altar in the world – was made accessible to the public. After being covered in scaffolding for a year, the first phase of the altar’s renewal was completed in early December.

The first phase involved removing thick layers of dust from the altar’s upper section. This involved applying a solvent “to remove newer interventions and repairs, as well as common surface dirt, and then we filled black traces and damaged parts with liquid silver,” head of the Regional Restoration Studio in Levoča, Ivan Tkáč, told the Sme daily. “Finally, we sprayed the surface with gold glaze.”

Next, the scaffolding was removed. “During the Christmas season and New Year’s, both visitors and believers will be able to admire this artwork without the scaffolding,” Tkáč said, as quoted by the TASR newswire.

When the scaffolding was in place, a life-sized image of the altar was placed over it so that those visiting during the renovation could get a sense of how it looked.

During the renovation there were no interesting discoveries, apart from letters and images on the rear of the altar.

The first phase of the renovation started in December 2012 and cost €123,00 – partly financed (€80,000) by the Roman-Catholic Parish Office in Levoča, and partly by the Messerschmidt Foundation. The bigger, upper section of the altar should be safe for the next 100 years, Tkáč opined, with no more maintenance and repairs needed for this period of time.

The second phase of the renovation, focusing on the altar cabinet, the panel paintings, the predella and the sculptures, began after the Epiphany on January 6. Estimated to cost more than €176,000, it is to be financed by the Messerschmidt Foundation.

“The first part was more demanding as for small details and filigree works, while the second part, the altar cabinet, has more compact space,” restorer Juraj Maták told TASR. “However, there will be a problem with three main statues, which are huge and will be difficult to manipulate. But the procedures themselves are always the same – to clean, fill with putty and cover up.” The works in the church are part of the Levoča city complex, inscribed on the UNESCO heritage list, and are expected to be completed by Christmas 2014. In the 2014, the scaffolding will only cover the main part, about 8 metres high.

The last time the altar was renovated was in the 1950s, by the Kotrba brothers, who saved it from irreparable damage.