FOR YEARS citizens, businesses and transparency watchdogs have been calling for changes to improve Slovakia’s judiciary and make it more trustworthy. Prime Minister Robert Fico, amid his presidential campaign, says the time for change has come, and has made promises toward that end. But his political opponents and critics of the judiciary remain sceptical. 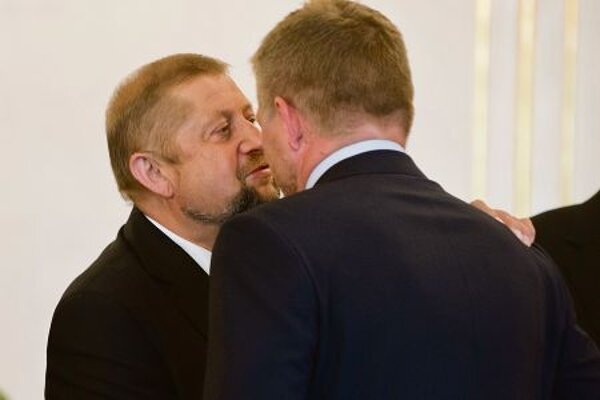 FOR YEARS citizens, businesses and transparency watchdogs have been calling for changes to improve Slovakia’s judiciary and make it more trustworthy. Prime Minister Robert Fico, amid his presidential campaign, says the time for change has come, and has made promises toward that end. But his political opponents and critics of the judiciary remain sceptical.

The independence of the judiciary, law enforcement and corruption across society, including the courts, are consistently cited by citizens, the business community and international organisations as major problems in Slovakia. Most recently, the European Commission (EC) cited the independence of Slovakia’s judiciary as a problem in its first ever anti-corruption report . The Eurobarometer survey, carried out in November 2013, showed that only 25 percent of Slovak citizens view the national justice system as trustworthy.

The government, and particularly the Justice Ministry, have appeared rather dormant when it comes to the judiciary, however, until recently. Fico, after his earlier claim that the government “is losing patience” with the judiciary on January 30, joined Justice Minister Tomáš Borec to introduce the changes they plan to propose. The opposition suggests it is no coincidence that Fico has started discussing judiciary reform shortly before the presidential election, in which he is running as the official candidate of the ruling Smer party. Fico however denies any allegations that his interest in the judiciary is part of his campaign.

Speaking after his visit to the Justice Ministry on January 30, Fico admitted that some of the changes will require constitutional amendments, and thus the support of opposition MPs.

The PM claims that in terms of a formal framework of the judiciary, Slovakia meets the European standard, citing judges’ 13th and 14th bonus salaries and other advantages that their position brings. The judiciary however lags in terms of its trustworthiness and independence.

“We have the ambition to divide the normal, brave judges from judges who do not belong in the judiciary,” Fico said. This should be achieved through several changes, among them the introduction of clearances for all judges in Slovakia. Since the Constitutional Court previously ruled that clearances are an inappropriate intervention of executive power into the judiciary, they cannot be compulsory. But according to Fico and Borec, the Judicial Council can cooperate with the National Security Bureau (NBÚ) when issuing clearances.

The Justice Ministry will also propose smaller changes, such as stricter terms for granting 13th and 14th salaries to judges, more rigid rules for reviewing the health condition of judges on sick leave and a new rule requiring judges to pay damages if Slovakia loses a case at the Constitutional Court or the European Court for Human Rights concerning court delays. To increase the responsibility of court chairpersons, the ministry will propose prolonging their term from the current three years to five.

Supreme Court President Štefan Harabin welcomed Fico’s pledge to allow judges and judicial organisations to offer their opinions on the draft changes, saying that he “has never been reluctant to discuss the judiciary professionally”.

On the other hand, the For Open Justice (ZOJ) association of judges criticised the changes, saying they imply the collective guilt of all judges, “the vast majority of whom do not bear the blame for the current state of the judiciary”.

“The low trustworthiness of the judiciary is mainly due to the means of representation of the judiciary through its top bodies, mainly the current Supreme Court and Judicial Council president, and many controversial rulings of the Judicial Council,” reads the ZOJ statement, signed by the association’s president, Katarína Javorčíková. The ZOJ accuses the Judicial Council of violating laws and the Constitution and notes that the government, parliament and the president are allowed to fill nine out of 18 posts in the Council, and thus can influence its work. Moreover, the ZOJ believes that Harabin has made public statements that violate judicial ethics, which were offensive not only his opponents but also the Constitutional Court and the media.

To bring about change, suspicions of cronyism and nepotism in the judiciary should be investigated and the people responsible should be sanctioned, the ZOJ argues.

“The condition is that real moral and professional authorities are put into the top judiciary jobs,” the ZOJ stated, adding that this is part of the authority of the government, the president, and the parliament.

Former justice minister and current independent MP Lucia Žitňanská also criticised the proposal to introduce security clearances for judges, pointing to the fact that chief justice Harabin received his clearance when he served as justice minister in the first government of Fico.

“I’m afraid that letting the Judicial Council decide about the reliability of judges, given its current way of functioning, would clear the judiciary only from those who are uncomfortable for some,” Žitňanská stated.

Žitňanská also proposed a change in the law requiring audio recordings of court hearings, something she was planning to introduce when she served as justice minister in 2011. She claims the Swiss Financial Mechanism signed a contract with the ministry back then to finance the recordings. She called on Smer MPs to support her proposal if they are serious about the need for changes in the judiciary declared by their chairman.

Other steps involve the division of the twin post of the Judicial Council chair and the Supreme Court president (currently held by Harabin). This is another change that would require a constitutional amendment, and thus opposition support.

The ZOJ applauded this step, as it would “do away with the inappropriate concentration of power in the hands of one person”, saying they have been proposing this since the association was founded.

The other steps that Fico and Borec mentioned, however, do not touch upon the core problems of the judiciary, the ZOJ wrote in its statement.

Žitňanská said that she proposed dividing the two posts three years ago, but that Smer MPs did not support it. She filed the proposal again at the end of January.

“Smer MPs can thus show in the vote how seriously they take the words of their prime minister and presidential candidate,” Žitňanská said.

Harabin, on the other hand, supported the idea, saying it is a realistic demand to amend the current model, which was passed during Slovakia’s accession talks with the EU.

“Personally I endorse the Italian model, where the head of state – the president – chairs the Judicial Council,” Harabin said.

Such a change could conceivably bring Fico to the helm of the Judicial Council, as he is favoured to win the upcoming presidential race in March.

The ZOJ expressed surprise at the prime minister’s sudden willingness to discuss judiciary changes now during the presidential campaign, when last year the government appeared to be satisfied with the state of the judiciary.

Žitňanská spoke along the same lines and went even further, accusing Minister Borec of participating in the prime minister’s presidential campaign.

“Until now minister Borec was assigned to maintain peace; today he got the task to make changes,” Žitňanská said, adding that none of the changes the government is proposing are new.

Fico denied such allegations, adding that he only campaigns on Saturdays and Sundays.

Nevertheless, his official campaigning website features a report on the plans for changes in the judiciary, as announced during the press conference with Borec on January 30.