NATIVITY scenes are a popular Christmas tradition in Slovakia, often made from traditional materials like wood, stone, corn husks or wicker, but sometimes even sand or ice. These are called Bethlehem in Slovak, to remind people of the birthplace of Jesus. 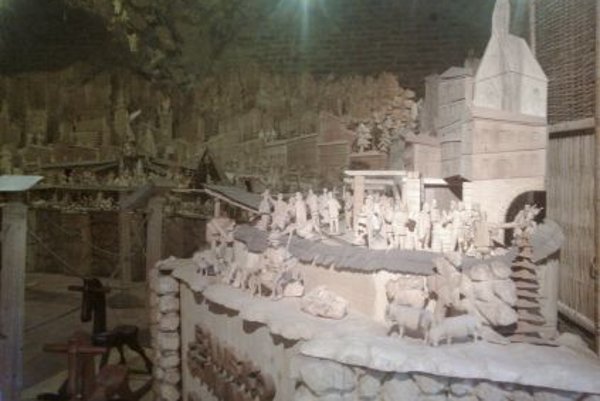 NATIVITY scenes are a popular Christmas tradition in Slovakia, often made from traditional materials like wood, stone, corn husks or wicker, but sometimes even sand or ice. These are called Bethlehem in Slovak, to remind people of the birthplace of Jesus.

The famous wooden Bethlehem in the central-Slovak city of Banská Štiavnica continues to grow. Built directly inside a souvenir shop in the centre of the town, it was adorned in late January with new wooden figures resembling mine trolls, as well as scenes from popular jokes involving the fictitious local character, Nácko.

Peter Chovan, an architect by profession, has been creating the Bethlehem in the shop for several years, carving the figures out of wood from linden, walnut and cherry trees. Banská Štiavnica’s Bethlehem is already bigger than the famous wooden one in Rajecká Lesná: it is now 21 metres in length, and contains 800 figures, about 400 of which are moveable.

This Bethlehem depicts the history, development and traditions Banská Štiavnica’s, one of the most beautiful sites in Slovakia. A former mining town for gold and silver, it had the first mining academy in the world. The beginning of the Bethlehem is represented by 8 mine trolls who rule the underworld and above them, a depiction of a medieval method for mining gold and silver.

Then comes the Bethlehem itself, above which is a panorama of Banká Śtiavnica, with its famous buildings, like St Catherine’s Church, the Trinity column, the Klopačka device for summoning miners and the former Chamber Council, Kamerhof. The city’s main thoroughfare, Trotuár, is shown featuring 28 figures walking in the town’s traditional Salamander Parade. The Bethlehem also offers a look into local pubs, depicting the traditions of miners and students, like accepting greenhorns called Šachtág, throwing the mayor into a cannon and a “miners’ presidium”.

The New Castle and the medieval conquest of the city by the Ottomans are also shown here. The hill known as Sitno looms in the background of the scene. The most recent additions include scenes showing typical Štiavnica crafts, like the making of pipes, gingerbread and caskets, as well as the work of blacksmiths and wheelwrights. However, the wooden Bethlehem is far from being finished, Chovan said, as Banská Štiavnica is an inexhaustible source of inspiration.