“RESPONSIBILITY lies on both sides,” UK Minister for Europe David Lidington said of complaints that Slovak Roma immigrants are flooding his country. 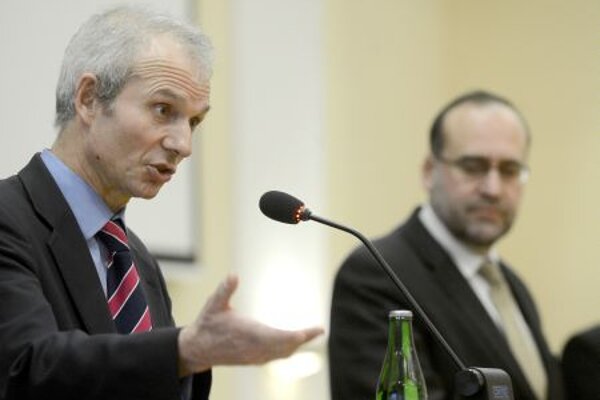 “RESPONSIBILITY lies on both sides,” UK Minister for Europe David Lidington said of complaints that Slovak Roma immigrants are flooding his country.

Lidington met with State Secretary of Ministry of Foreign Affairs Peter Javorčík in Bratislava on February 12 to discuss European Union-related issues like energy, the eurozone and economics.

“We focused even on long-term issues such as position of the United Kingdom in the European Union,” Javorčík told the press. “It is in our interest that Britain will stay in European Union and be full-valued member and integral part of this group.”

Lidington met also with Foreign Minister Miroslav Lajčák to discuss the international security issues related to Ukraine, Syria and Iran as well as to present their opinions on accession process of Balkan countries to EU.

During the press conference Lidington responded to warnings from David Blunkett, a former UK home secretary, that British cities could face race riots as an influx of Roma migrants create “frictions” with local people, The Telegraph reported last year.

Roma migrants from Slovakia must “change their culture” and send their children to school, stop dumping rubbish and loitering in the streets in order to soothe tensions, Blunkett said, as quoted by The Telegraph.

Lidington pointed out that such tensions are particular incidents in particular towns or cities mainly in the city of Sheffield. While government needs to take care about community relations and integration of people who come to the UK, migrants should show they are committed to integration. That means learning English and making an effort to adapt to way of life in the UK, Lidington told The Slovak Spectator.

“We are pretty diverse country with many different ethnic or religious communities,” Lidington said. “And I think it is fair to have expectations from everybody no matter what their background.”

Javorčík agreed, saying such conflicts between Slovaks abroad and local authorities need to be seen in context of a balance between rights and obligations.

Lidington said that while his country rejects the free movement of workers and is at the same time introducing tougher tests for access to its welfare system and certain public services. Those tests need to be seen in a context of welfare reforms imposing restrictions on access to welfare by British citizens, he said.

The UK is doing that to motivate people to take a work when it is available and in order to restrain the overall costs of welfare spending, Lidington said.