Challenges of cultivating IT specialists

IT JOBS traditionally rank among the highest paid in Slovakia, and people with degrees from IT educational institutions are almost certain to find work despite the country’s 13-percent unemployment rate. But IT’s rapid development means the labour market needs IT schools to produce graduates who have not just theoretical, but practical, working knowledge of the latest technologies. 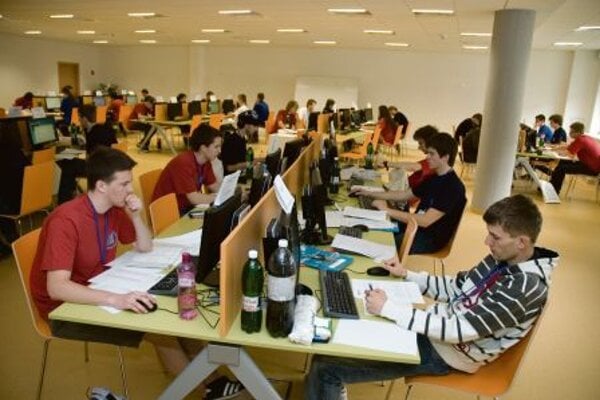 The more IT educational institutions, the better for the digital industry (Source: Courtesy of FIITSTU)
Font size:A-|A+

IT JOBS traditionally rank among the highest paid in Slovakia, and people with degrees from IT educational institutions are almost certain to find work despite the country’s 13-percent unemployment rate. But IT’s rapid development means the labour market needs IT schools to produce graduates who have not just theoretical, but practical, working knowledge of the latest technologies.

“The biggest challenge [IT education faces in Slovakia] is to constantly keep up with the pace of the dynamic development of IT,” Ivan Kotuliak, vice dean for domestic and foreign cooperation and promotion of the Faculty of Informatics and Information Technologies at Slovak University of Technology (FIIT STU), told The Slovak Spectator. “Another big challenge for all the technical universities is to work with secondary schools to maintain the quality of their graduates. Because following trends in IT also means that higher requirements are put on IT students than in other fields.”

The faculty is in constant contact with IT companies active in Slovakia as well as abroad, and adapts the content of its curricula to their needs. It also holds the accreditation of the London-based Institution of Engineering and Technology (IET), granting accreditations for five years at the most. Last year FIIT STU was the only faculty in Slovakia with this accreditation, according to Kotuliak.

Students also work directly on assignments for companies, allowing them to apply what they learn to real-life practice.

“We do not want to congest them with theory; we view it as a springboard to the solution of practical assignments,” said Kotuliak.

The Slovak IT Association (ITAS) sees changing the education system to reflect the needs of the labour market as the biggest challenge.

“Today university graduates work in most positions in IT companies, even though there are positions in which graduates of secondary schools can work, as has already happened in western countries,” Gustáv Budinský, executive manager of ITAS, told The Slovak Spectator. “However, there are no such [graduates] in Slovakia or they do not have the required knowledge.”

Dušan Šveda, associate professor at the Faculty of Science at the Pavol Jozef Šafárik University in Košice, which is a partner in the SAP Academy launched earlier this year, believes that education in IT must find a balance between standard preparation of IT specialists, which stems from general principles, and the requirements of IT companies, so that graduates can gain as much practical experience with current products and technologies as possible.

“Universities must ensure that their graduates have a chance to be successful in the labour market, not only during the next three to five years, but that they are sufficiently flexibly prepared to be able to respond to the dynamic development in informatics and information technologies, as well as the changing requirements in the labour market,” said Šveda.

Tomáš Božik, the director of non-profit organisation Aptech Europe, which provides a certified programme to prepare qualified IT specialists with a focus on web and mobile software applications development, said despite high demand for IT workers, interest in IT studies at universities has moderately decreased. He attributes this decline to demographic developments and some students opting for “the path of least resistance” and studying, for example, humanitarian sciences.

“We consider making IT studies more attractive, with the aim of increasing the interest of students in IT fields, while simultaneously [helping students to be] more flexible and fit the requirements of the constantly changing IT market, to be the biggest challenges,” Božik told The Slovak Spectator.

Budinský considers it tragic that labour market forecasts are based on information collected at job offices.

“There is so much demand for IT specialists that only a small number of them end up at the job office,” said Budinský. “Thus IT companies do not search for people at job offices. This results in the completely incorrect conclusion that there is no demand for IT specialists. Indeed, there is demand, but a completely different format and channels are used for their recruitment.”
While ITAS is active in IT education, its level of cooperation lags behind that of the automotive industry.

“We also have some excellent examples,” said Budinský. “For example, cooperation of the digital industry, university and secondary education as well as self administration in the Košice-based IT Valley, which has brought up and employed 6,000 specialists in information and communications technologies in a few years,” said Budinský.

ITAS welcomes private and corporate initiatives in IT education.

“Cisco Network Academy and SAP Academy are excellent specialised [forms of] education that supplement the standard education,” said Budinský. “Aptech can serve as competition for existing universities, especially in bachelor-level education. The more that such activities spread, the better it is for the digital industry.”

SAP Academy is the latest undertaking in the field of IT education in Slovakia, which is expected to bring up SAP specialists. T-Systems Slovakia, SAP Slovensko, the Faculty of Science at the Pavol Jozef Šafárik University in Košice and the Košice IT Valley are behind this educational project.

“We know that many organisations in the state, public and private sphere need SAP specialists,” said Jozef Ondáš, the executive director of Košice IT Valley, in January, as cited by the Hospodárske Noviny daily, adding that this may represent a need for 1,200 to 1,500 top SAP specialists over four or five years.

Šveda specified for the daily that the programme at the SAP Academy is set to generate 400 to 500 new IT specialists annually.

“These programmes are designed for employers of companies, members of the Košice IT Valley and students of universities, especially in the fields of informatics and economics,” Šveda told The Slovak Spectator. “The programmes will also gradually spread to select secondary schools.”

The academy plans to begin offering study programmes to employees of companies in March and university students in September. They say there has been considerable interest in their programmes so far.

“Interest in the programmes is above our expectations,” said Šveda, adding that they have registered more than 100 applicants so far, consisting of employees, graduates and students.
Aptech Europe is another organisation providing IT education beyond the state-financed educational scheme in Slovakia.

“Compared with the traditional studies at universities, our programme is oriented toward practice,” said Božik. “During their studies, students work on five projects, within which they develop real applications, work in a team and learn presentation skills and the ability to cope with assignments in a short time, all under the supervision and leadership of Slovak and foreign lecturers.”

Students have the option of attending school in the morning, the afternoon or during weekends.

So far 80 students have successfully completed their studies at Aptech, with interest in their study programmes increasing each year.

“The development of applications is one of the most lucrative branches of IT in which we have been seeing a lack of qualified experts over the long run,” said Božik. “We register each year more interest from students in studies of web programming and desktop applications. University-educated people around 30 years of age make up the biggest share of those interested in the programmes, many of whom earned a degree in another field in which they were unable to find work.”

The second group of applicants are fresh secondary school graduates who want to start their careers as soon as possible.

According to Kotuliak of FIIT STU, programmes like those offered by Aptech are supplementary forms of education that should increase the low number of IT specialists in the labour market and offer bachelor’s level programmes.

He also noted that obtaining the broader view necessary for doing engineering work, for example, is quite difficult when schools focus on specific technology rather than principles.