SLOVAKIA’S public administration has finally begun its transition from paper to a fully electronic system, with the state promising to reduce red tape for private individuals and businesses. Though the system is in its initial stages, state bodies will have until November 2016 to digitise their systems. 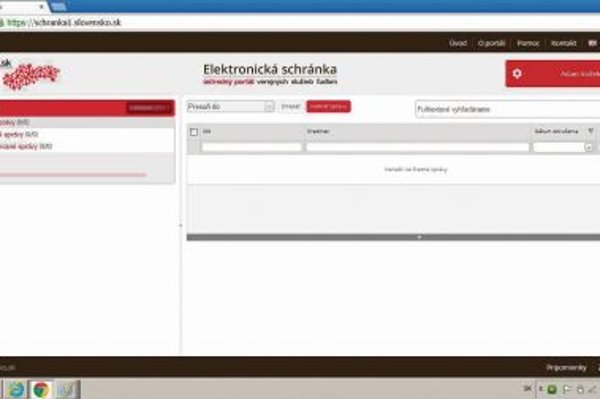 E-boxes are being rolled out. (Source: SME)
Font size:A-|A+

SLOVAKIA’S public administration has finally begun its transition from paper to a fully electronic system, with the state promising to reduce red tape for private individuals and businesses. Though the system is in its initial stages, state bodies will have until November 2016 to digitise their systems.

At the start of the year, the National Agency for Network and Electronic Services (NSES) launched 4.5 million electronic boxes for all citizens 18 years and older at the central public administration portal, www.slovensko.sk. About a month later, the NSES opened 650,000 e-boxes for corporations and the self-employed, based on data from registers at the justice and interior ministries and state bodies.

“It is possible to say that this is like sending letters between a citizen and an office, or also between an office and another office,” NSES director Ivan Ištvánffy told the public broadcaster RTVS when explaining how the electronic services work.

While many liken e-boxes to email, Ištvánffy compares an e-box to certified mail, and is a full-fledged alternative to delivering physical mail to the addressee.

An e-box can store 1 GB of data, and its capacity can be increased by 1GB, 10GB or 100 GB.
Only holders of electronic identification cards with the activated Online eID function can access the boxes.

The state has sent out thousands of eIDs since December 1, when it began issuing them. eIDs differ from regular IDs in that they have an electronic contact chip on the rear containing all of the user’s identification data. They also contain data needed for electronic – as opposed to handwritten – signatures.

People can ask for an eID any time, and do not need to wait for their current IDs to expire. Replacing an expired ID card is free, but replacing a valid one with an eID costs €4.50. Citizens can also pay €20 to receive an eID within two days. Along with the eID comes a reader, free of charge, which is necessary for communicating with state bodies electronically. The software needed for the electronic communication is available for free at www.slovensko.sk.

While the use of e-boxes will remain voluntary for private individuals and the self-employed, firms have 18 months to adopt them, after which electronic communication with state bodies will be compulsory. This means that the state will activate e-boxes for corporate entities in August 2015 at the latest. State offices that are able to send documents to companies electronically will send them to their e-boxes. After 15 days any documents sent electronically will be considered delivered, even if the recipient has not read it.

For now firms are testing the e-boxes. Small and medium-sized entrepreneurs welcome the possibility of electronic communication, but they also see shortcomings.

“We support increasing the possibilities of communicating with the public and financial administration,” Vladimír Sirotka, head of the Slovak Association of Small Companies (SAMP), told the TASR newswire. “We are receiving a large number of comments and impulses related to the operation of the e-portal, and complaints.”

Sirotka specified that their members have encountered problems receiving confirmation that a document was sent, which could be problematic for businesses.

Some services are already available at the public administration’s central portal. For example, it is possible to register for permanent or temporary residence, while services are also available for the Trade Register (Živnostenský register), the Business Register (Obchodný register), the Cadastral Portal (Katastrálny portál) and the General Submission (Univerzálne podanie).

Initially, e-boxes were only compatible with Internet Explorer and Windows operating systems. Now, Chrome and Firefox browsers can be used, while programmes for Linux and Mac operating systems should be available in two months.

Foreigners living in Slovakia are not yet eligible for e-boxes, as the e-Government law stipulates that in order to log on to the system, one must verify his identity with an eID. The Interior Ministry has promised to start issuing new IDs with the chip to foreigners, which will work the same as eIDs for Slovaks, but has not done so yet, the Sme daily wrote.

“We will start issuing them only after the format is set up in a way that enables the usage of this authenticator, not only for legal representatives of companies but also employees or students from abroad,” ministry spokesperson Alena Koišová told Sme.

The NSES proposed allowing foreigners to log in with a name, password and a GRID card, but the Interior Ministry objected. Until a solution is found, foreigners can use a small portion of electronic services on the old version of www.slovensko.sk.

Slovaks living abroad will encounter similar problems, especially those who cancelled their permanent residence in Slovakia. When moving abroad citizens must return their IDs. There are hundreds of Slovaks living in villages just across the Austrian and Hungarian borders, who, however, continue to work in Slovakia and thus also pay income taxes here, and would like to communicate with the state administration electronically. The Interior Ministry estimates that it will solve this problem in six months.

“We will choose an alternative authenticator when we learn for which people and in what life situations it should be designed,” Jozef Čapuška, the head of the informatics department at the Interior Ministry, told Sme.

While Slovakia lags behind all other EU countries in terms of its provision and usage of electronic services, the government hopes that 2014 will see a breakthrough.

“If Slovakia continues at its current pace, then after two or three years we will manage to catch up with Austria in informatisation [of society],” said Pavel Bojňanský, the general director of the section of informatisation of society at the Finance Ministry, last November when announcing the list of electronic services already launched or to be launched as of the beginning of 2014.