Conducting on both sides of the pond

FEBRUARY concerts of the Slovak Philharmonic (SF) are conducted by its chief conductor, Emmanuel Villaume. This is nothing unusual, but it starts to be less obvious when you consider that he also heads the orchestra of the Dallas/Winspear Opera House. Thus, he conducts three couples of concerts in Bratislava, then flies to Oman with the SF and then he will return for a series of concerts in May. 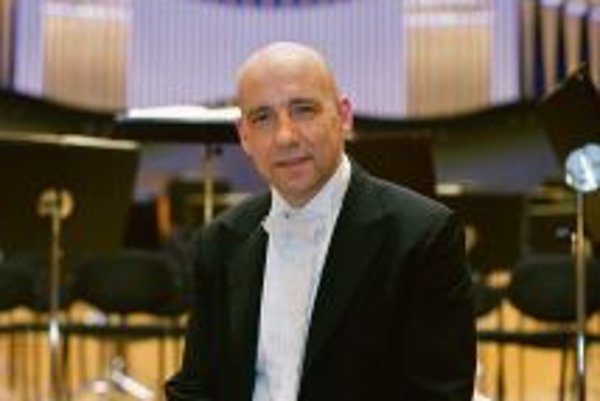 FEBRUARY concerts of the Slovak Philharmonic (SF) are conducted by its chief conductor, Emmanuel Villaume. This is nothing unusual, but it starts to be less obvious when you consider that he also heads the orchestra of the Dallas/Winspear Opera House. Thus, he conducts three couples of concerts in Bratislava, then flies to Oman with the SF and then he will return for a series of concerts in May.

“Both from the career point of view and artistic fulfilment, it has been very important for me to have a position in the symphonic world, and a position in the operatic world,” Villaume said when explaining his decision to leave other assignments (including one in Slovenia) and split his time between these two places. “Our careers now are so specialised that you have symphonic conductors who do almost only symphonic music, or lyric operatic conductors who do only opera. For me, it’s very important to do both – because you have really different types of qualities required for these genres,” he told The Slovak Spectator. He summed up that “a good balance between symphony and opera is crucial for a conductor to be really at the top of the game”.

The chief conductor added that in terms of a career, it is important to be both in the US and in Europe, especially if a person has stable positions, because they take a lot of time, and one can do more in-depth work. “It is important to be in the symphonic world and the operatic world – but it is also important in terms of presence in the business, to be in Europe and in the [United] States,” he said. When asked why his European location was Bratislava, Villaume answered that apart from logistical reasons (“it is central, and you can travel easily”), he enjoyed working with “the orchestra that plays with a heart – and I like the culture [of the orchestra], I like their attitude; I found these people are really first and foremost in music-making, in communicating with the greatest souls of humanity through those scores. And playing all together”. Of course there are problems, he added, but this orchestra has never failed to communicate through music “on a human and sometimes on a spiritual level. And that is what music is about”.

When asked how he manages the logistics of these two jobs, Villaume said that it is quite difficult, because he has to plan years in advance, and must be physically and mentally fully in the present when rehearsing with the orchestra, for example. And although phone, email and Skype are a big help, the “flying conductor” admits he literally “never stops working”. Among the positives of this situation, he named the knowledge of two cultures and two attitudes, American and European, which enables him to enjoy both and to be open to the positive aspects of both. “I still feel French, though, and this is my deepest root, although I was born in the Alsace region and German culture has influenced me, too,” he added. He further said that at 49 he feels he is at the peak of his strength and energy, and at an ideal time for growing professionally. He admitted that he has never gone to the orchestra pit thinking, “I don’t feel like playing this just now”, or “What am I doing here?” If that were to happen, he admitted, he would have to re-consider his plans.

As for selecting the repertory for the Slovak Philharmonic, Villaume said: “You need balance: so you need classics, Romantic, late-Romantic, and contemporary music. It is extremely important to balance this. You cannot offer just one taste to the public; you can change the openness of the audience to certain works.” Giving an example, he suggested that the rather conservative public in the south of US, in Dallas, was excited by five new commissions in three years. In Bratislava, he said he tries to put into his own conducting the late-Romantic (or Spät-Romantik, in German), e.g. Mahler or Bruckner, early 20th century music, but also classics – Mozart and Beethoven; and sometimes even contemporary. “The difficulty is sometimes that we plan for two-three years in advance; and then there is also an element which is totally random – when I am to pick a symphony by Mozart, I will prefer one that has not been played by the SF in 20 years, or maybe never…”

Head of the Slovak Philharmonic, Marián Lapšanský, wants to defend the Slovak repertoire, “and I totally agree with it,” Villaume added. “I have played – with pleasure – some contemporary Slovak music, and I have played at festivals some of the 19th century and early 20th century Slovak pieces. To work in the mission of a national institution, we are representing symphonic music for Slovak people and it’s our mission to defend Slovak music. For me, it is interesting, because obviously, I was not raised in this culture, but I can see the influences of Vienna – and even French influences.”

After the dual concerts on February 20 and 21 – bringing the works of Mozart, Brahms and Beethoven – and on February 26 and 27 – offering French works through Arthur Honneger, Francis Poulenc and Maurice Ravel – Villaume will give a guest performance in Oman with the Slovak Philharmonic and renowned mezzo-soprano Olga Borodina to perform a Gala-concert of famous operatic arias. He will be back in the Slovak capital in May, conducting the Philharmonic (as well as the Slovak Philharmonic Choir and operatic soloists) in performing Beethoven’s Concert for Piano and Orchestra No. 3 in C Minor and Mozart’s Requiem on May 6 and 7, and an evening dedicated to Shakespeare’s work in music, especially that of Tchaikovsky, on 15 and 16.

Villaume concluded by saying that every employment has a certain span, but for now he feels good in his position with the Slovak Philharmonic (and the opera in Dallas) and would like to keep the situation the way it is.