ONE way to mark St Valentine’s Day is to celebrate the feminine, sensual and sophisticated side of life through Oriental dance. 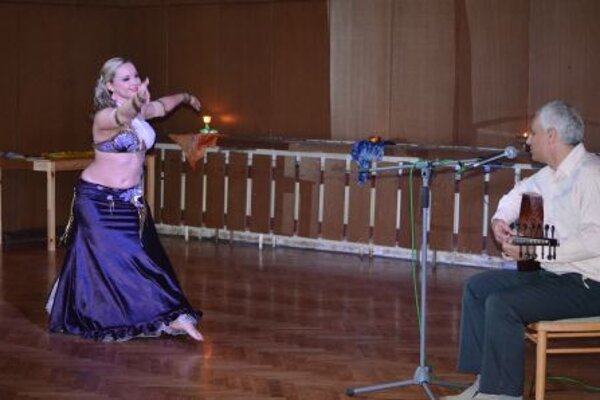 ONE way to mark St Valentine’s Day is to celebrate the feminine, sensual and sophisticated side of life through Oriental dance.

Local dancers organised a hafla – an Oriental dance party in which dancers (both professional and amateur) demonstrate their skills in a non-competitive environment – shortly before the holiday of love, called the Sensual Hafla, on February 8.

This party of sensuality revolved around a lesser known form of dance combining Andalusian and Oriental styles, called Muwashshahat. With its sophisticated rhythms and artful, stately grace, it is sometimes referred to as “palace” or “court style”.

Muwashah is the classical poetic style of Anadalusian Arabic literature, and Muwashshahat is plural, meaning a set of poems recited to music and expressed through dance movements.

The hafla began with a lecture and demonstration on Muwashshahat by Prague-based Syrian poet and musician Marwan Al-Solaiman. Later, the Mafra Divas troupe and dancer Zaynab performed the Muwashshahat to an improvised piece of music played by Marwan. The second part featured a guest dancer from the Czech Republic, Katka “Kathreen” Krejčová, performing to more of Marwan’s improvised music.

“I graduated to be a civic engineer in former Czechoslovakia,” Marwan told The Slovak Spectator. “Then I returned home for about eight years, but afterwards I came back to the Czech Republic and stayed – for 24 years already.”

When asked about his path from construction to music, he said: “I have played various folklore instruments since my childhood, but learned to play more sophisticated instruments like the lute or the flute only here.”

He explained that he currently plays with a band accompanying dancers at various festivals, but also at private parties or events.

Kathreen told the audience that she discovered Oriental dance after suffering health problems as a student of the dance conservatory. While it remains her main focus, she explores other styles, like scenic dance and performing in musicals and earlier even in ballet. She also had a cameo appearance in a Czech film called Ženy v Pokušení / Women in Temptation, by Jiří Vejdělek, but she comments on this with a laugh: “if you blinked, you might have missed my performance, it was so brief”.

But the traditional Andalusian style was not the sole focus that evening, as haflas usually involve a variety of dancers and groups performing numerous styles. This time, the audience got to see Raks Sharqi, Tarab, Modern Belledi, as well as a drum solo, Tribal Fusion and modern Indian Bollywood style performed by Czech and Slovak dancers.
A Spring Hafla is planned for April 5.