Light at the end of the tunnel for construction

MUCH needed growth in Slovakia’s construction sector continued in the final month of 2013, partly due to a mild winter that allowed construction work to continue into the season. Some experts remain cautious, calling the growth fragile, while others see it as a sign that the sector has bottomed out and is gradually starting to revive. 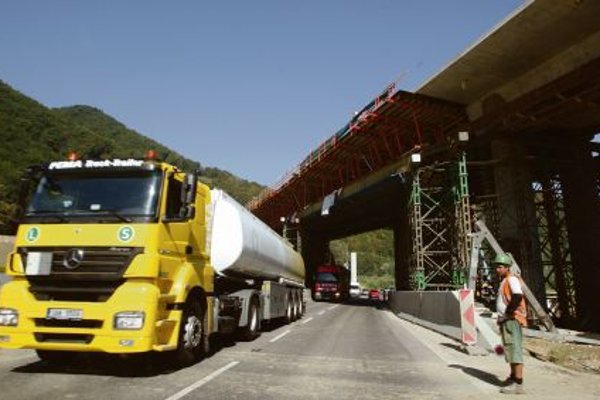 MUCH needed growth in Slovakia’s construction sector continued in the final month of 2013, partly due to a mild winter that allowed construction work to continue into the season. Some experts remain cautious, calling the growth fragile, while others see it as a sign that the sector has bottomed out and is gradually starting to revive.

While construction production in December rose moderately by 2.9 percent when seasonally adjusted compared with November, it rose by a considerable 10.1 percent compared with December 2012, according to data of the Statistics Office.

In November, construction production rose 2.6 percent month-on-month. For all of 2013, builders reported a decline in production by 5.3 percent compared with the previous year, according to the Statistics Office.

According to VÚB Banka analyst Andrej Arady, unofficial reports from the construction sector indicate that apart from the growth of production due to good weather conditions, the situation has been stabilising, which is confirmed by sound growth in confidence in the sector.

Zsolt Lukáč, the head of the Association of Construction Entrepreneurs of Slovakia (ZSP SR), remains cautious over whether the last two months of 2013 indicate a positive turn in the development of construction production. He believes that year-end settlement of 2013 invoices is behind the moderate increases in November and December.

“The indication [of the revival] will be demonstrated, we assume, only during the spring,” Lukáč told the public Slovak Radio.

The Ministry of Transport, Construction and Regional Development believes that the growth in the construction sector is a result also of steps taken to speed up the construction of large infrastructure projects. Ministry spokesperson Martin Kóňa specified that more than 100 kilometres of highways and dual carriage-ways are currently under construction.

“The Slovak construction sector should start to stabilise this year, and especially the public engineering sector should be better off this year compared to previous ones,” said Vacek. “Compared with the Czech Republic, the situation in Slovakia is significantly more optimistic, even though it is still not easy.”

For Vacek, the 5.3-percent drop in construction production is not a significant surprise.

“The results of the quarter analysis of the Slovak construction sector from last year indicated an expected decline of 6.5 percent, i.e. the predictions of directors counted toward this result,”

Market watchers expect that more intensive highway construction, as well as the gradual revival of building construction, should keep the construction sector’s numbers positive and growing.

“After five years of uninterrupted decline, we expect that the construction sector will finally report year-on-year growth of production in 2014,” wrote Koršňák.

Martin Baláž, an analyst with Slovenská Sporiteľňa, pointed out in his memo that sentiment in construction continued to improve in January, indicating that the construction sector has already hit bottom.

The Ministry of Transport, Construction and Regional Development expects that it will increase investments in the construction sector in the upcoming years.

“We are very glad that not only analysts, but also bosses of construction companies themselves talk about a turn in construction and that they expect an increase next year,” said Kóňa. “This change will reflect positively not only in construction production but also in the growth of employment.”

However, Kóňa recalled that while state investments can stimulate construction, the decisive factor is the private sector.

Vacek of CEEC Research expects that in 2014 the Slovak construction sector’s several-year-long decline will end.

“This will depend especially on whether the government will manage to launch the planned realisation of some large orders in the infrastructural field, which would prop up the performance of the sector as a whole,” said Vacek. “However, there is still a lack of sufficient volume of private investments, which is of key importance especially for structural engineering. Structural engineering is also much more demanding in terms of human resources, i.e. it has a bigger influence over employment and thus no fast increase in employment will occur in the construction sector in 2014.”

While developers have announced the revival of several projects that were put on the back burner when the crisis hit, like Twin City or New Stein, large construction companies, like Doprastav, Skanska or Váhostav, are pinning their biggest hopes on highway construction, which has received robust financing from EU funds.

On February 20, a consortium of Doprastav, Strabag, Váhostav – SK and Metrostav began construction of a more than 11-km long bypass of Žilina, part of the D1 national highway. The construction is projected to last four years, while the price for which the consortium won the public tender is €427.2 million without VAT. Originally, the state estimated the costs at €487.6 million. The project includes 11 bridges and two tunnels, one 2.37 km and the second 687 metres long.

Some days earlier, on February 11, the construction of the Hubová – Ivachnová stretch of D1 highway began. The more than 15-km long highway, including the 1.9 km-long Čebrať tunnel and 21 bridges, should be completed in 2017. The consortium of Váhostav – SK and OHL ŽS will build the stretch for €227 million without VAT.

These are only a few of several highway and dual carriage projects to be launched this year or which are already under construction. As Kóňa told The Slovak Spectator, “if we managed to conclude only those tenders, which are already running, then there will be the most [kilometres] of highways and dual carriageways under construction in the whole history of Slovakia”.

Moreover, it remains unclear whether some of the biggest construction companies will be allowed to participate in future highway tenders after being found guilty of forming a cartel in a previous public competition.

In January the Supreme Court upheld an Antitrust Office (PMÚ) verdict finding the companies Strabag, Doprastav, BETAMONT, Inžinierske Stavby, Skanska DS and MOTA – ENGIL, ENGENHARIA E CONSTRUCAO, S.A. guilty of forming a cartel when competing in a public tender to build an eight-kilometre stretch of the D1 cross-country highway between Mengusovce and Jánovce in the north of the country back in 2005. The companies involved must pay an aggregate fine of nearly €45 million.

Slovakia still lacks a continuous highway connecting its two biggest cities, Bratislava and Košice, while the deadline for its completion continues to be postponed. The route of the Turany – Hubová stretch remains unresolved, while a builder for the construction of the Višňové tunnel, expected to last about five years, has not been selected, just to mention some problems.

While the National Highway Company announced the tender in late 2011, the winner of the state order of €383 million, has not been chosen yet. The state has halted all the tenders, including this one, in which companies involved in the cartel have participated. The final verdict about the winners of the tenders will depend on an analysis by the Public Procurement Office, which has not been completed yet, the Hospodárske Noviny daily wrote in mid-February.