BRATISLAVA’S Old Market Hall, or Stará Tržnica, fell on hard times – but efforts to revive the spirit of the landmark building have proved fruitful according to the non-profit group now tasked with reviving its fortunes. 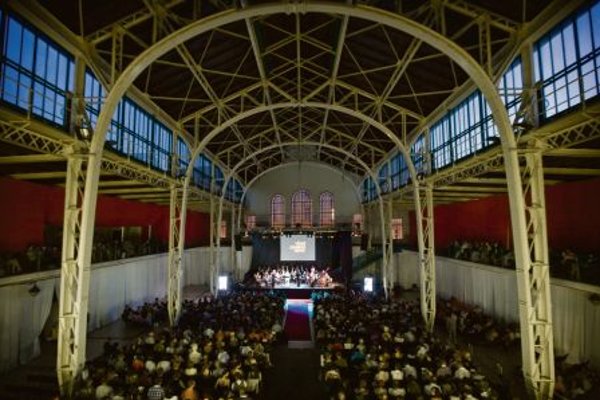 BRATISLAVA’S Old Market Hall, or Stará Tržnica, fell on hard times – but efforts to revive the spirit of the landmark building have proved fruitful according to the non-profit group now tasked with reviving its fortunes.

“Our vision is to make the Stará Tržnica a city meeting point, where people can meet, communicate, have fun and also take their loved ones,” Denisa Chylová of the Aliancia Stará Tržnica civic association, told The Slovak Spectator. “We try to combine the programme so that various target groups can find something for themselves to enjoy.”

Built in an eclectic style in 1910 by town engineer Gyula Laubner to the blueprints of František Nebyla, the facility served as a marketplace until 1960 when it was changed into TV studios of the then-state-run television. By 1982 it was the property of the Culture Ministry and later returned to the city administration in 1990. In April 2009, it was closed, with the city administration claiming it was too costly to operate the almost empty market hall.

It was meant to be reconstructed by a private company (to which then-mayor Andrej Ďurkovský rented it for 10 years, in spite of a disagreement with city councillors) and re-opened. That never happened, but in 2013 the Aliancia Stará Tržnica civic association began renting it out for symbolic amounts while pledging to reconstruct it and keep it open to the public, offering regular food markets, services and also irregular cultural events.

Apart from the regular food market “Trh-Piac-Markt”, which is now organised once a month and starting in May every Saturday, another regular event is the Visegrad Markets, design markets that strive to present the countries of the Visegrad Group (Poland, Hungary, the Czech Republic and Slovakia), Chylová said.

She added that for spring, new programmes will target pensioners and families with children. Some of the new events planned in cooperation with the Milan Šimečka Foundation for Sundays will aim to address expats - starting on April 13.

Among the less regular happenings, Chylová said that the Good Market – or Dobrý Trh – took place in the Stará Tržnica in December 2013. Because of its success, it will be back again this year. Asked about concerts and cultural events, she answered: “Yes, we plan concerts.” Examples include British singer Anna Calvi on March 4, the Radio_Head Awards from Radio FM on March 30, and the band Ghymes on April 9.

“Along with renewing the functioning of the Stará Tržnica, we also are initiating a neighbourhood project that aims to put the cultural and social rooms surrounding the facility into an informal kind of association to spark cooperation and complement each other from a programme and organisational point of view,” Chylová said. “We want to connect, not divide.”

“We perceive the Stará Tržnica, also from the point of view of its history and its nature, as an open space that should be – so to speak – for all,” she said. “Thus, we try to work with the programme strategy in a way involving events for various target groups: young people, families with children, pensioners; so that no one feels excluded.”

The programme can be found in Slovak at staratrznica.sk.