BRATISLAVA’S Old Market Hall (Stará Tržnica) has been re-opened, and while the only regular events scheduled so far are markets offering local products, along with irregular concerts and other cultural events, the civic association that runs the market, Aliancia Stará Tržnica, has revealed plans for upcoming weekend community events. 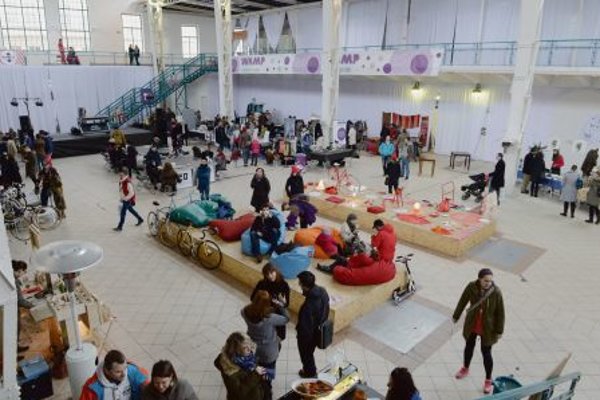 BRATISLAVA’S Old Market Hall (Stará Tržnica) has been re-opened, and while the only regular events scheduled so far are markets offering local products, along with irregular concerts and other cultural events, the civic association that runs the market, Aliancia Stará Tržnica, has revealed plans for upcoming weekend community events.

One project that promises a certain regularity while also fulfilling the association’s stated goal “to connect rather than divide”, is the Visegrad Markets. Established primarily to present the designs of the Visegrad countries (Poland, the Czech Republic, Hungary and Slovakia), it also includes accompanying programmes, like musical events, the Jem Iné pop-up cooking school, discussions (e.g. “Keep Calm and Support Your Local Designers”) and more.

The first event took place on February 9 (with a warm-up party on February 7) and four others have been scheduled: on June 1 Urban Market will present Slovak designs; Wamp will feature emerging Hungarian designers on August 3; on September 28 designSUPERMARKET will offer part of the international design festival that takes place annually in the Czech Republic; and on November 9 Kioosk will present independent “self-publishing” from Krakow. The project is supported by the Visegrad Fund, as well as by the V4 countries’ cultural institutes based in Bratislava.

Illah van Oijen of the organising Urban Market non-profit organisation, explained for The Slovak Spectator: “The first of the Visegrad Markets was a shared event with all the partners, which Aliancia Stará Tržnica prepared together with the Urban Market. The goal was to get to know our three international partners of the project, and give them a chance to get to know the building and its possibilities.”

She added that during their stay Urban Market prepared not only a warm-up party and a market where all the partners met with the public, but also “the schedule for the rest of this year, in which all the partners will have the possibility to organise their own markets. We had a workshop and a meet-and-greet with possible partners from Slovakia. For instance, the Polish organisers of Kioosk met with delegates from the Literárny Klub, and the organisers of the SELF X festival.”

Van Oijen explained that the original idea was to create a small network of similar organisations in different countries, to see what they can learn from each other and to establish an exchange between designers and visitors, while also bringing new blood to the Bratislava design market. She added that as this exchange was possible with the support of the International Visegrad Fund, the Slovak organisers looked for counterparts in the V4 countries.

When asked about how the partners were selected, van Oijen responded: “We mainly tried to find partners that specialise in a field of design that is practised in Slovakia but which has not been reflected in the current markets organised so far, and to connect them to other existing events in Slovakia. The Czech designSUPERMARKET is something between an exhibition and a design fair, and they will be working together with Bratislava Design Week in September.”

She explained that the “Polish Kioosk is an independent self-publishing fair, created by a group of design students and their friends, and a lot of volunteers, attracting many international renowned guests. In November, we will create – together with them – an independent event during the Bibliotéka book fair. WAMP are Budapest’s biggest organisers of design markets – every Sunday there is at least one. They have a special gastronomic design fair that we will bring to Bratislava. The Slovak Urban Market will bring a special Visegrad edition to its market in May during the DAAD architecture event”.

As for potential visitors and customers, the photographer-turned-organiser van Ojien said that they see “anyone who is interested in design, wants to support local producers and creative entrepreneurs, and knows how to appreciate an original piece of work. Kids, youngsters, and why not also grandmothers?”

In 2014, the Visegrad Markets will only take place in the Old Market Hall, but in the future, “we hope that the exchange of designers and visitors will work naturally. If you like the Kioosk fair in Bratislava, it might make you curious to go and visit Krakow to see their original event. I definitely am,” van Oijen said.

Urban Market also cooperates with the Čerstvé ovocie association, in addition to Aliancia Stará Tržnica, but its members are looking for more partners to co-organise individual events. As for the Czech, Polish and Hungarian institutes in Slovakia, they have all supported the project.

“To tell the truth, we were only external partners in this project,” István Kollai of the Hungarian Institute wrote to The Slovak Spectator. “We are happy to have participated in the [first] market. In Hungary, design as a ‘creative industry’ is highly appreciated as a form of presenting the culture to the world. Thus, we are looking forward to participating in the Visegrad Market in August, when the Hungarian WAMP will be the main guest.”

“We had no idea what to expect from the first event,” one of the Slovak organisers summed up. “But it was really great. People were truly interested and even though the designers drove all the way from Budapest, they were happy with the sales. We are looking forward to the next events.”