IN THE INTERNATIONAL European Tree of the Year 2014 poll, the public has until the end of February to vote for one of the finalists from last year’s national competitions. 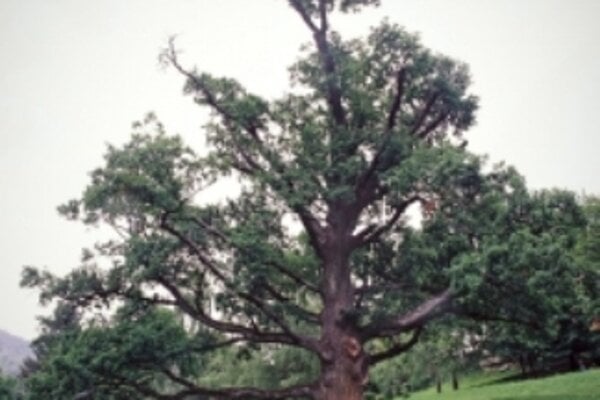 Slovak Tree of the Year 2013 (Source: Courtesy of the Ekopolis Foundation)
Font size:A-|A+0

IN THE INTERNATIONAL European Tree of the Year 2014 poll, the public has until the end of February to vote for one of the finalists from last year’s national competitions.

The Slovak competitor, an English oak (also known as pedunculate oak, Quercus robur) that dominates a garden once belonging to doctor, scientist, painter and writer Gustáv Kazimír Zechenter (aka Laskomerský) in downtown Kremnica, received 1,955 votes in the national contest, and has so far placed fourth in the international one, with about 3,742 votes.

The poll emphasises the size, age and history of the trees, rather than their beauty, the SITA newswire wrote. This can be seen in the trees that currently occupy the first three places: a Bulgarian elm is 1,000 years old and has received almost 42,00 votes; a Hungarian pear tree in Gödöll, under which the national revolutionary Lajos Kossuth is said to have signed the declaration of Hungarian independence, has garnered 31,120 votes; and in third place is a Czech oak which is alleged to have saved two lives during the 2010 floods.
The Slovak tree is 350 years old and is of big importance for the town of Kremnica.

The goal of the international poll, the 4th year of which was organised by the Czech Nadace Partnerství foundation, in cooperation with the State Environmental Fund, the Environment Ministry and the company Tetra Pak, is to draw general attention to old, precious or endangered trees and more generally to raise interest in the environment. In Slovakia the Nadácia Ekopolis / Ekopolis Foundation is coordinating the competition.

This year, trees from Bulgaria, the Czech Republic, France, Ireland, Italy, Hungary, Poland, Scotland, Wales and Slovakia are competing. People can vote for their favourite tree until the end of February on the treeoftheyear.org website.