YOU would rarely find an Irishman who hates potatoes, said Anne-Marie Callan, making Irish cuisine instantly appealing to Slovaks who appreciate their own potato-based food traditions. 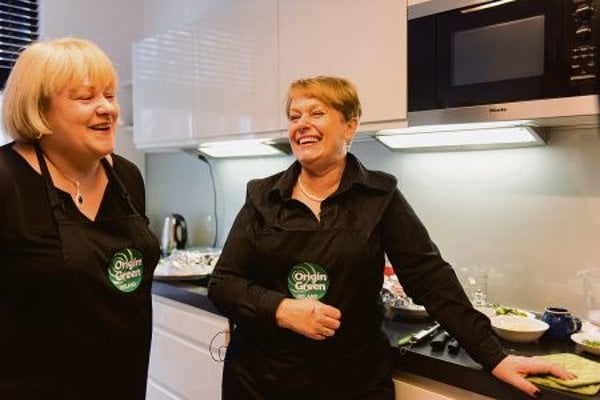 Yet, the story of potatoes in Ireland goes back as far as the 15th century, when the Spanish Armada was shipwrecked off the coast of western Ireland, and potatoes were brought ashore, according to Callan, the Irish ambassador to Slovakia. It was commonly thought that Sir Walter Raleigh brought potatoes to Ireland, “but as far as we know, there is evidence that they were actually in Ireland before that,” Callan added.

“Since then, the labourers in Ireland relied a lot on potatoes and were very well-fed, because they are extremely nutritious, and certainly with some milk all the dietary needs of the labourers were taken care of,” said Callan, while gently shaping boxty potato cakes in the kitchen of her Bratislava residence, assisted by her friend Bróna Ní Mhuirí, a teacher from Ireland.

As a result of this nutritious diet, Ireland’s population increased dramatically from 1 million in 1570 to 8 million in 1840, the ambassador added. Unfortunately, the population became a bit over-dependent on potatoes, and when wide-scale failure of potato crops led to the Great Famine in the mid-1800s, the diet became more varied, encompassing more traditional vegetables, eggs, milk and meat, Callan said, offering her insight into her country’s relationship with the tuber.

Nevertheless, the menu planned for the Cooking with Ambassadors programme prepared by The Slovak Spectator and TV SME, included much more than just potatoes: organic Irish leg of lamb, Colcannon, Irish cream liqueur cheesecake with chocolate-covered mint leaves and iconic Irish whiskey, among others.

Yet, the word organic has been resonating strongly in the Irish cooking experience.
“I think the island of Ireland is known for a clean, green environment where the food is produced in a healthy way,” Callan said, adding that in addition to that, her country’s food board has also been stressing the idea of sustainability.

According to Callan, a lot of Irish farms are working hard on a sustainability programme, focusing on a range of issues including water, waste, emissions, bio-diversity, the quality of ingredients they use, and even social programmes around nutrition.

“We realised that now it’s important that we all eat healthy and high-quality products, but also focus on producing as sustainable as possible and lower the carbon footprint,” Callan added.
Potatoes are far from the only ingredient that the cuisines of Ireland and Slovakia have in common. The two nations also share an affection for cabbage, pork and cheese, which are an important part of Irish cuisine.

“I think there are a lot of links, and it maybe goes back to our Celtic roots, because the Celts came from this area and migrated to Ireland,” Callan told The Slovak Spectator. “It’s very easy to like Slovak cuisine. I have to say that I like the fact that you cook a lot of food the way we do – nice soups and stews, very similar to the food we like.”

When looking at the differences, Callan says that the Irish use more seafood than Slovaks, with the sea and its bounty being a rather important part of Irish cuisine.

In Ireland, the whiskey and beer tradition is also quite important, with Callan saying that she was struck by how many Irish beverages and whiskeys she saw after arriving here.

“You see a lot of Irish exports of different whiskeys that would have been seen as more special in the past but now are becoming much more popular, and that’s something that also a lot of Slovaks like, so it’s a shared interest,” Callan said, adding that Ireland also has a fairly large population of Slovaks, estimated at 25,000.

“A lot of people come to Ireland to visit family and friends; more probably go and do the whiskey tours, learn about how the whiskey is made and do tastings,” Callan concluded.