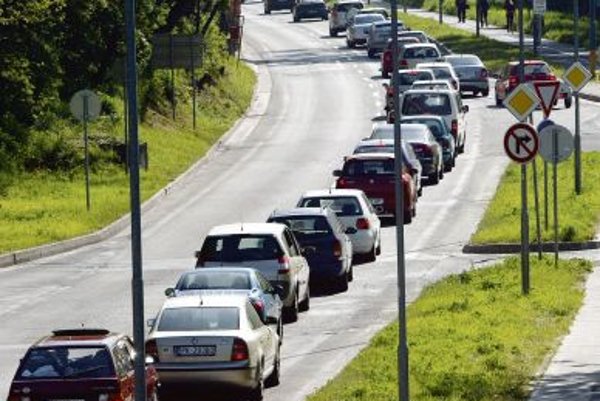 Commutes from villages into the city can be epic. (Source: SME)
Font size:A-|A+

INSTEAD of walking among grey communist-era apartment blocks, breathing smog and struggling to find a parking spot, more and more people are opting to reside in village on the outskirts of bigger cities. New lifestyles come with new problems as infrastructure and other services struggle to keep up.

Young families moving out of the cities seeking for cheaper living expenses are behind the trends, Zuzana Kusá, a sociologist with the Slovak Academy of Sciences (SAV), told The Slovak Spectator. The trend is particularly clear in villages close to the country two biggest cities, Bratislava and Košice, which while offering various employment opportunities also have weak housing policies.

“It would be great if people move to rural area particularly because they like it there,” Kusá said. “However, many people have mostly economic reasons for their move since they can not afford living in the town where they have a job and all needed services.”

Moving to the village

People moving to villages are young with higher social status and characterised by higher levels of education and income, according to Katarína Moravanská a sociologist with SAV, told Sme daily in 2011. Naturally, children of pre-school and school age come with them too.

“New habitants are usually in middle or higher income classes,” Moravanská said. “It means they are able to pay mortgage and expenses related to gaining of residence and car.”

Denisa, a 30 year-old mother who moved from Slovak capital to Bernolákovo village agreed.

“We wanted small family house and my boyfriend comes from this region,” Denisa told Sme some of her reasons to move to Bernolákovo.

On the other hand, the worst thing about living in a village is commuting, Denisa said. The travel to work took her one hour no matter what time she left the house, so she quit her job.

“It was really bad,” Denisa said, as quoted by Sme.

Towns, cities and villages are connected and positive trend in village is mirrored in negative trend in the city. While more people in villages boost their income and increase the education level as well as quality of public life towns and cities face the threat of general social regression of their citizens, according to Moravanská.

“People leaving [cities] are accompanied with decreasing income from taxes as well as with deterioration of empty buildings and creation of socially deprived neighbourhoods,” Moravanská said as quoted by Sme.

The influx of migrants can cause problems to some villages since they are not prepared for such amount of people. Fast-growing villages lack schools, kindergartens, some services and social life opportunities.

The case of Chorvátsky Grob village, near Bratislava, illustrates the seriousness of the problem as Mayor Miroslav Marynčák left his post in October 2013 after being unable to handle massive immigration, Sme reported. After non-regulated development of the village was approved by his precursors he lost the ability to stop it, according to Marynčák.

“I can not further proceed with solutions for serious problems of this municipality,” Marynčák said, as quoted by Sme. “I met a wall which I can not overcome.”

In 10 year the population of Chorvátsky Grob grew from around 1,200 to more than 6,000 people, Sme daily reported in November 2013. While the number of homes is growing rapidly, investment in roads, sewers, schools, kindergartens and shops are negligible. The village has no money for them and do not have much tools how to persuade investors to cover those expenses.

“One thing is to have one school per 300 houses in land-use planning [another thing is] when we do not have mechanism to force developer to build that [school],” Marynčák said, as quoted by Sme.

For example, Barbora who lives in Čierna Voda, part of Chorvátsky Grob, and in past worked as pharmacist in local drugstore, gave up her attempts to find an elementary school for her child since three public and one private school are not enough for the whole village, Pravda daily reported in October 2013.

“It is impossible to get into private school, let alone public ones,” Barbora said, as quoted by Pravda. “After they refused [to take] my daughter in both cases, I did not have any other option but to stay with her at home.”

The owners of the land demand changes in village’s land use plan, pay for them and then decide they will build family houses, Krumpolcová said. Then, with help from lawyers, the owners manage to avoid the rules and introduce changes without securing the proper infrastructure. Those areas are without concept and do not fit into the original image of the village.

“Sometimes it seems to me that urbanism is fading from our country and that urbanism just reflects the will of citizens or owners,” Krumpolcová said. “They are following the idea: ‘I wish this so it will be like this, because I am the owner’.”

Moreover, areas suited for 50 family houses with sewers, roads and other infrastructure are often filled with up to 200 houses, she added.

“How this can be solved?” Krumpolcová asked. “Only when people will be moral; when they are willing to obey laws by choice and do not use lawyers looking for holes to avoid them.”

BROKEN benches, immobile car wrecks, missing barrier-free entrances and illegal junkyards are some of the problems reported by students who participated in a competition for reporting shortcomings in their towns and villages.

The Slovak Governance Institute (SGI) NGO which runs Odkaz pre starostu (The Message for Mayor) website organised a competition to improve the environment in Slovak towns and cities. Message for Mayor (OPS) is a website that receives messages from citizens who report problems in their neighbourhood and send them to municipalities that have the power to deal with them. SGI created the webpage in January 2010, inspired by British online service FixMyStreet.com, the Sme daily reported.
More than 40 students from 17 schools participated in the competition, reporting more than 100 problems in towns and villages all around the Slovakia. First prize, a t-shirt and €300, went to Martin Korec, a third-grade student at M.R. Štefánik grammar school in Nové Zámky, according to OPS webpage.

“You just need to know your city and notice things around,” Korec said, as quoted by Sme.
The website has received more than 4,100 reports as of August 2013, while around 40 percent of them were successfully resolved, the OPS administrator Ctibor Košťál of SGI told Sme in August 2013.
In comparison with official means of reporting problems to municipalities, the web site offers more simplicity and makes it easier to monitor the process of dealing with the complaints.

“There are people who would rather report their problems anonymously,” said Babín’s mayor Terézia Vlžáková, as quoted by Sme.

The Bratislava municipality receives the biggest amount of reports, according to OPS data, with 851 people having sent their complaints through this website to the Slovak capital in 2013, Ľubomír Andrassy, the spokesperson for Bratislava’s mayor, told the SITA newswire.

Most reports are related to transport and road management, Andrassy said, adding that projects should also approach other authorities, not only municipal officials, as some problems are beyond their jurisdiction.

Still, the project has huge potential, according to Košťál.

“Everyone should have the possibility to approach their mayor, at least via the internet,” Košťál said, as quoted by Sme. “When you see the quality of online solutions on municipalities’ webpages you realise it is really, really poor.”