Rabindranath Tagore At Home in Šamorín

THERE ARE events, moments, experiences, and also exhibitions which are hard to share and describe, Daniel Fischer exhibition/installation in the At Home Gallery in Šamorín. 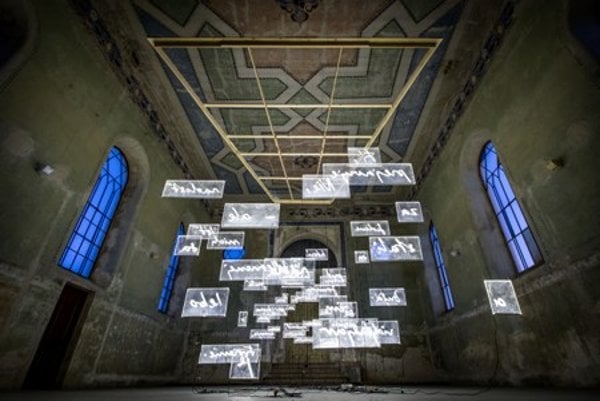 THERE ARE events, moments, experiences, and also exhibitions which are hard to share and describe, Daniel Fischer exhibition/installation in the At Home Gallery in Šamorín.

This gallery in a town lying close to Bratislava was originally an Orthodox synagogue, but “for almost 20 years we have been here”, Csaba Kiss, who manages it, said. The small but impressive space – the interior has been preserved mostly in original form – invites visitors to enter, but the current installation stops and perplexes them. The set of plastic boards with inscriptions seems like a message in Hebrew or Arabic script, but when the curiosity leads them to a small peep-hole made of wire on the side opposite the entrance, a clear message can be read in Slovak.

This quote from Rabindranath Tagore can be perceived as chaotic grouping of individual installations, but when read through this single point, not only does the quote become clear, but the artwork stands out in its full completeness. Moreover, the plates seem of the same size, although they are in fact quite different.

The quote (Sádhaná ... Realisation of Life) goes: "It is only those who have known that joy expresses itself through law who have learnt to transcend the law. Not that the bonds of law have ceased to exist for them - but that the bonds have become to them as the form of freedom incarnate. The freed soul delights in accepting bonds, and does not seek to evade any of them, for in each does it feel the manifestation of an infinite energy whose joy is in creation."

Fischer, a professor at the Bratislava-based Academy of Fine Arts, has been toying with the idea of the work for some 20 years, according to the Sme daily, and musing on the technicalities of the project for two more years. Ever more dissatisfied with the political, social and especially cultural development of Slovakia, the artist tried to find accurate expression. The result is stunning, not only due to the force of the ideas materialised in words, not only due to its technical complexity and visual artfulness, but also because of its sheer grandiosity and symbiosis between the interesting space breathing with historical atmosphere and the installation “which is most impressive in the dark”, Kiss said.

The exhibition can still be seen until March 9 when a so-called finissage (a farewell de-installation ceremony) takes place. There are no official opening hours, but a visit can be agreed upon (also in English) with Csaba Kiss at 0903/255-681.