Two wheels good: Cycling in and around Bratislava

Bratislava is a relatively small city, whose charms can mostly be explored on foot. But this is also one of the most rewarding regions in central Europe in which to hop on two wheels and exercise some pedal power, either on the very fringes of the city centre or slightly further into the surrounding countryside. 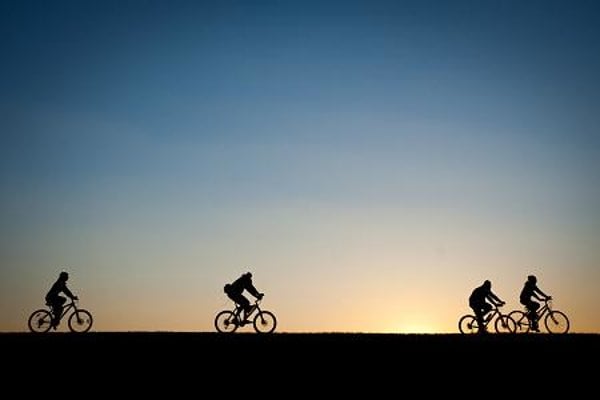 Bratislava is a relatively small city, whose charms can mostly be explored on foot. But this is also one of the most rewarding regions in central Europe in which to hop on two wheels and exercise some pedal power, either on the very fringes of the city centre or slightly further into the surrounding countryside.

One popular cycling route along the Danube offers all the luxury one can imagine: an excellent smooth surface divided for both cyclists and roller bladers; numerous refreshment stands dotted along the way. Plus, of course, the appeal of the largest river in Slovakia. It attracts thousands of cyclists every weekend. On the other hand, there are also plenty of routes offering a more peaceful journey, where your only company will be deer and birds. This is the more tranquil reality of cycling outside of Bratislava, which has much to offer for both recreational and more experienced cyclists.

There are 40 cycling routes in the Bratislava region, which comprise close to 700km of path and road to navigate. It’s not bad for an area slightly more than 2,000km2.

Of course, it is not easy to choose any one route over another, but three of the best include: “Cycling trip along the Danube”, which leads from Bratislava to Danube Čunovo dam, 20 kilometres from the centre of Bratislava; the 37km-long “Along the Morava River” route, starting at the village of Devínska Nová Ves and ending at Vysoká pri Morave; and “To Marianka and Stupava” which also starts at Devínska Nová Ves and describes a 28km-long circle passing through Stupava, Marianka and Záhorská Bystrica. All are detailed on the website of the Bratislava Self-Governing Region (www.region-bsk.sk).

While the previous three routes are all suitable for recreational cyclists, a fourth, known as the “Green Bike Tour” has been laid out to appeal to more experienced riders and offers a more physically demanding option. It leads from Železná Studienka recreation area, through the rugged terrain of the Small Carpathians, and then to Kamzík hill, a total 34km trip.

In the recent past, many Slovak cyclists have done much of their riding in eastern Austria, which is close to Bratislava and offers a more advanced cycling infrastructure and, largely, better road surfaces. It can often be the opposite in Slovakia, where many of the paths are undermined by a low quality surface, particularly in Bratislava city, and routes that often do not connect with one another.

However, cyclists point out that the Bratislava region offers a greater variety of both terrain and distance from civilisation than eastern Austria, in particular in the hills to the north of Bratislava.

“I think around Bratislava it doesn’t matter whether you ride a road or touring bike, whether you are professional or just a person on Saturday ride, everyone will find something that suits them,” said Andrej Daňo, a 23-year-old medical student from Bratislava. “There are hills and there are plains.”

ALONG THE RIVERS OR TO THE HILLS

Back on the most popular route along the Danube, it is not uncommon to experience literal traffic jams of cyclists, especially during spring or summer weekends. But it is easy to see why: the route, which usually takes two and half hours for an average cyclist to navigate, also takes in the castle in Rusovce and the Danubiana Meulesteen Art Museum, as well as wonderful views of the river itself.

The many refreshment possibilities are also a bonus. “You can just take one bottle of water which you can refill all the time, or buy a drink somewhere,” Daňo said. “You do not have to take five litres [of liquid] with you.”

However, problems may occur when the path is overcrowded, according to Ľuboš Jakubek, a 23-year-old student from Bratislava, who is a regular on the route. “I have seen ambulances there many times,” Jakubek said, referring particularly to the part of the path close to Slovnaft, Bratislava’s oil refinery, where roller-bladers do not have their own lane.

Plenty of other routes exist for anyone with a more adventurous spirit. Emília Šišková, a 31-year-old cycling instructor, suggests using the routes in the Carpathians, which are well sign-posted despite being in the rural regions away from the city. Daňo prefers heading along the Danube to the Morava River, especially when he is in the mood to substitute some nature and wild animals for other cyclists. “There are wetlands there, which attract various birds,” he said. “When those fields are flooded it is simply pure romance.”

Of course, cycling can have its dangers and Bratislava’s riders are often frustrated that routes do not connect with one another, particularly out of the city, forcing them onto the busy and poorly-surfaced roads, where they can be vulnerable to the whims of ignorant drivers.

After last winter, the roads in Bratislava were left in very bad shape, and the number of pot-holes made headlines in the local news. “The first day [I took a ride outside] I got a puncture because of stupid hole and destroyed a new tire-tube,” said Šišková.

According to the BSK, however, there are plans to rebuild around 280km of cycling routes. Administrators are now looking for a partner via public tender, Iveta Tyšlerová, the spokesperson of BSK told the SITA newswire in March.

The cycling lobby in Bratislava will continue to campaign for improvements.

In September 2012, the BSK opened a new bridge between Devínska Nová Ves and Schloss Hof for pedestrians and cyclists aimed to improve the connection between Slovak and Austrian cycling routes, and opened a public vote to decide its name. Thanks largely to an online campaign, the public decided that it should be called the “Chuck Norris Bridge”, after the American martial artist and internet hero.

Slovak regional officials rejected the results of the poll and called it “Freedom Cycling Bridge”. The BSK Vice President Ivo Nesrovnal explained that the name is not suitable since: “You can not cross Chuck Norris”.