Kňažko: 'I am now unlikely to change'

THE VOTERS would not be buying a “pig in a poke” if they vote for him, suggests Milan Kňažko, a leading personality of the Velvet Revolution who has been active in post-revolutionary public and political life, and now is running for the presidency in the March 15 election. “I am now unlikely to change,” he told The Slovak Spectator. 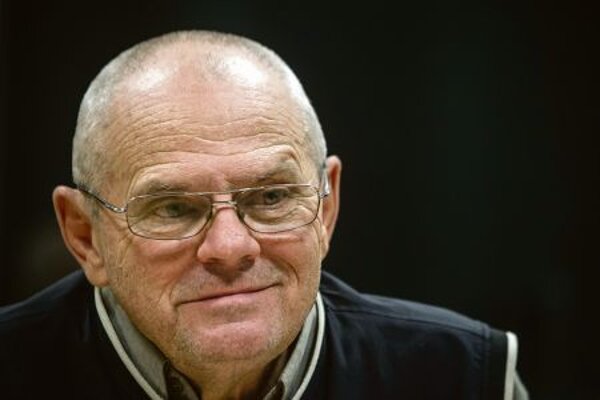 THE VOTERS would not be buying a “pig in a poke” if they vote for him, suggests Milan Kňažko, a leading personality of the Velvet Revolution who has been active in post-revolutionary public and political life, and now is running for the presidency in the March 15 election. “I am now unlikely to change,” he told The Slovak Spectator.

The Slovak Spectator (TSS): Given the presidential powers, what priorities would you set for your term in office and what would be the biggest challenge?
Milan Kňažko (MK): I will in no way go beyond the presidential authorities as defined by the constitution. After all those years, things would be rather dynamic if the constitution is respected and dates for appointing significant functionaries are kept. We still remember the two-year delay of appointing a legitimately elected general prosecutor and we also see the situation at the Supreme Audit Office led by a man who should have not been there since 2012 – and the list goes on. The constitution tells the president to appoint officials in a manner which does not limit the normal functioning of constitutional institutions. I am also talking about respect for the vonstitution, which also has been violated. I would make sure that people whom the president appoints to the Judicial Council are morally and professionally suitable to improve the situation within Slovakia’s judiciary, which is distrusted by 80 percent of the population. The president should also respond to problems that bother society in areas where he/she does not have authority and urge those with the proper power to address these problems. We know that there is no equality of opportunity in the state administration where party affiliation dominates over expertise. We know that corruption has spread like cancer in this country and no strong voice is being heard.

TSS: Would you use the presidential power to appoint three members to the Judicial Council to change the presidential appointees in this top justice body?
MK: I would use all constitutional authorities to influence the makeup of this body. As I said, I would not want to exceed these authorities. I recently heard a boring discussion between two lawyers who tried to pretend that there will be a kind of restructuring of the judiciary. They somehow overlooked the fact that the judiciary is independent and as such it should be led by a democrat and not by someone who is abusing his power by giving inappropriate advantages to certain people while inappropriately punishing others, creating thus a mechanism of fear and servility, a kind of open-air museum of the totalitarian regime. First of all Mr [Štefan] Harabin should be recalled without delay. I believe that most of the judges in Slovakia are intelligent, with a sense for democratic development and capable of a kind of self-purification. The hypocrisy of presidential candidate Mr [Robert] Fico is appalling when he suggests that in a couple weeks he is going to change something that he had been forming for six years, since he has a share in the state of the judiciary in Slovakia and Harabin remains from his first coalition government.

TSS: The president is an important player in foreign policy. What would your priorities be? Where would you go for your first state visit?
MK: As the founder of the ministry of international relations in 1990 but also the co-founder of the foreign affairs ministry in 1992, I want to stress that there is only one foreign policy of the state. The president cannot have his own and then the prime minister have a different one. The foreign policy concept is simply given. We are in the European Union, in NATO and our priorities include those of our neighbours. Then there are neighbours in which Slovakia needs to be interested in, Ukraine or the Balkans, where Slovakia can share its experiences and help the EU to better understand these countries. As far as the first presidential trip is concerned, it would certainly be to the Czech Republic.

There is no closer nation and there is a tradition, thus it would be a sin of toying with the idea of making the first trip to some other land. I am glad that we again have started speaking about economic diplomacy which develops dynamically, depending on the economic growth, and one has to respond sensitively to that along with the ministries of foreign affairs and economy.

TSS: How would you use the act of individual presidential pardons and amnesties?
MK: Very carefully and exclusively in individual cases after gaining detailed insight. In no way would I grant general, full-scale amnesties.

TSS: Judicial Council Chairman Štefan Harabin suggested that the Judicial Council could be chaired by the country’s president, like in Italy. Can you imagine yourself chairing this top judicial body?
MK: I am glad that Mr Harabin is proposing what the future president would be doing. Nevertheless, I would remain rather cautious about such a model, or any proposal coming from Mr Harabin.

TSS: What do you consider the country’s biggest problems? What would you highlight in a state of the republic report?
MK: Though the president is not obliged to do so by law, he has a right to deliver an address on the state of the republic. It is a rough negligence of the duties of president when he has not been using this right for several years. This is why, as a candidate for president, I delivered such a report on January 14. The report should be critical, assess the progress of the country and hint at what is expected from the country to get closer to its set objectives. My report is available for the public on my Facebook profile. Among others I am speaking about open rule and transparency, which is a crucial part of fighting corruption but I essentially cover all the crucial areas of society.

TSS: What do you consider to be your main advantage and disadvantage in the presidential race?
MK: A president must have an insight into domestic politics but also have good orientation in foreign politics and be familiar with culture. None of the candidates who are running for the post have experiences comparable to mine. This sounds immodest but this is how it is. The president must be readable, understandable and predictable. I have been in politics many years and I have been known in public life for decades. There is no secret about the stands I took in key situations: be it during the totalitarian regime, in 1991 when the [Slovak] state was emerging; in 1993 when I quit the [Movement for a Democratic Slovakia] HZDS or at the time of defeating [Vladimír] Mečiar’s regime. I will just throw the false modesty away again and will say that whenever I had to say ‘yes’ or ‘no’ I have always decided in line with my beliefs and something which is devalued today: conscience.

I have never pursued personal or economic gains. After all, I have voluntarily left politics, which is a rare phenomena in Slovak political life. I am now mentally and physically ready to face the very difficult task of cooperating with the constitutional bodies, which promises to be very difficult even for an experienced president.

I am confident that good solutions are born only in cohabitation of different opinions. The rule of a single party is a danger for this country and this is one of the main reasons why I am running.

Interviewing the candidates
THERE are currently 14 candidates in the presidential race scheduled for March 15. Ahead of the official election campaign, The Slovak Spectator requested interviews from the five front runners who top the polls, asking all of them identical questions about their strengths and weaknesses in the race, and their goals for the presidency if they are elected.
The current issue features interviews with candidates Andrej Kiska and Milan Kňažko, both independent. The last edition featured interviews with independent Radoslav Procházka and Pavol Hrušovský, the official candidate of the People’s Platform. Prime Minister Robert Fico, the official candidate of the ruling Smer party, declined the request, citing his busy schedule as the main reason.
Kiska and Procházka (both running as independents) and Hrušovský responded to The Slovak Spectator’s questions via email. Independent candidate Kňažko spoke with The Slovak Spectator over the phone.