Kiska: 'I am not one of those traditional politicians'

ANDREJ Kiska emphasises that he is not one of those politicians who have been sitting for years in parliament or the government, and while some observers consider his lack of political experience a disadvantage, he sees it as one of his strengths. Ahead of the first round of the presidential election scheduled for March 15, The Slovak Spectator spoke to Kiska, who says he was fortunate enough to become financially independent and thus he will not have to report to any political party. 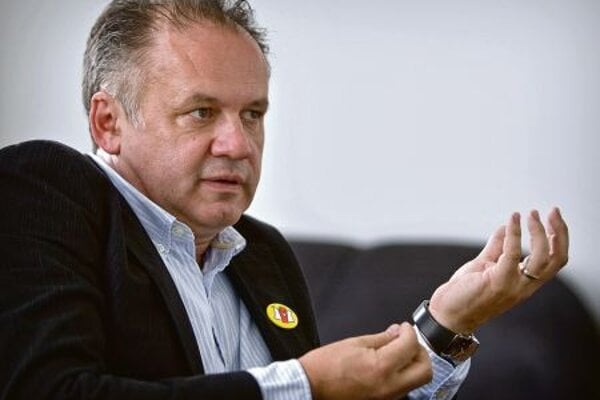 ANDREJ Kiska emphasises that he is not one of those politicians who have been sitting for years in parliament or the government, and while some observers consider his lack of political experience a disadvantage, he sees it as one of his strengths. Ahead of the first round of the presidential election scheduled for March 15, The Slovak Spectator spoke to Kiska, who says he was fortunate enough to become financially independent and thus he will not have to report to any political party.

The Slovak Spectator (TSS): Given the presidential powers, what priorities would you set out for your term in office and what would be the biggest challenge for you?
Andrej Kiska (AK): I consider the most important [priority] to return authority and trust to the presidential office. People must feel that the president is standing behind them; that it is a person who will stand behind them and would urge the government and parliament when they do not fulfil their duties towards the citizens.

[People have] to feel that it is a man who does not keep silent when something bad is happening, when the government and parliament are about to pass a harmful law. At the same time, [the president] is able to support and encourage committed people and the whole country, so that it is able to push through and first of all use its better features.

TSS: The president is an important player in the area of foreign policy. What would your priorities be in foreign policy and the representation of Slovakia? Where would you go for your first state visit?
AK: The president can contribute to Slovakia’s self-confidence so that it secures esteem and respect in the European Union, NATO and the world. Top diplomacy performed by the president is a strong tool. We can achieve respect, for example, when we place human rights ahead of economic interests, and when the president actively helps the promotion of Slovakia in the world. As far as the first visit is concerned, it would of course be to the Czech Republic.

TSS: How would you use the act of individual presidential pardons and amnesties?
AK: I consider the institute of general amnesty outdated. I would reach for individual pardons in special cases, always after consultations and based on recommendations by human rights organisations.

TSS: The president can appoint three members of the Judicial Council. Would you use this power to change the presidential appointees in the top justice body?
AK: I would nominate experienced personalities, who would decisively defend morals in the judiciary, to the post of members of the Judicial Council, who are appointed by the president. It would be one of the first things I would do if people put their trust in me and vote for me in the election.

TSS: Judicial Council Chairman Štefan Harabin suggested that the Judicial Council could be chaired by the country’s president, like in Italy. Can you imagine yourself chairing this top judicial body?
AK: I can imagine many things, but in principle I am not a supporter of extending presidential powers. But here I really feel like adding to the alleged ‘planned changes’ to the judiciary: it is a pity that these ‘planned changes’ do not come six weeks after the presidential elections in 2014. The Slovak judiciary is being distorted by a political alliance, concluded by the government and its chairman with Mr Harabin. Let’s not be fooled in connection with plans which, one day after the presidential elections, do not have to be valid.

TSS: What do you consider the country’s biggest problems? What would you highlight in a state of the republic report?
AK: We spoke about the judiciary, but the widespread corruption, which originates in the highest circles, is a large problem in the same way. If I frequently say that the government needs a counter-balance, because it does not have such a thing in parliament or the president either, I am also talking about the need for a serious discussion about the economy and the creation of jobs. About education, so that we do not miss the train, which we will be catching up with for decades. About health care, where the political elites are able to fiercely quarrel about the number of insurers, but we are still stagnating. These are the problems I would point to.

TSS: What do you consider to be your main advantage and disadvantage in the presidential race?
AK: I am not one of those traditional politicians who have been sitting for years in parliament and the government. I consider it my advantage, though some also see a disadvantage in it. I am running as an independent candidate and I am meeting my public promise that I will not accept a single dime from a sponsor or a political party. I had in my life the fortune that I am financially secure, thanks to which I will not have to report to any sponsor, but only to the citizens if they give me their trust.

Interviewing the candidates
THERE are currently 14 candidates in the presidential race scheduled for March 15. Ahead of the official election campaign, The Slovak Spectator requested interviews from the five front runners who top the polls, asking all of them identical questions about their strengths and weaknesses in the race, and their goals for the presidency if they are elected.
The current issue features interviews with candidates Andrej Kiska and Milan Kňažko, both independent. The last edition featured interviews with independent Radoslav Procházka and Pavol Hrušovský, the official candidate of the People’s Platform. Prime Minister Robert Fico, the official candidate of the ruling Smer party, declined the request, citing his busy schedule as the main reason.
Kiska and Procházka (both running as independents) and Hrušovský responded to The Slovak Spectator’s questions via email. Independent candidate Kňažko spoke with The Slovak Spectator over the phone.