BUSINESSES have a new tool for checking on current and potential business partners: the online registry of financial statements. In addition to providing useful data, the registry makes doing business easier by reducing administrative burdens. While some fear that publishing financial statements could violate trade secrets and give their competition an unfair advantage, experts say this is not the case. 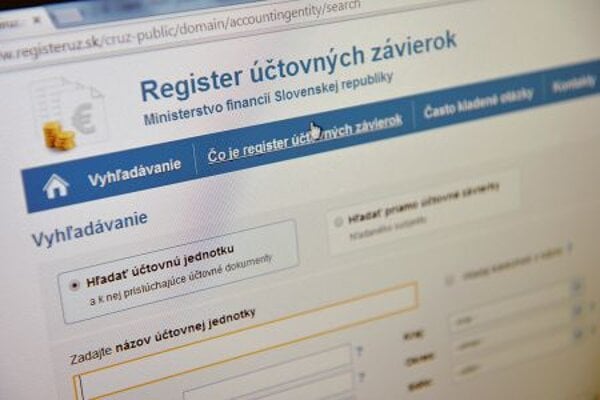 BUSINESSES have a new tool for checking on current and potential business partners: the online registry of financial statements. In addition to providing useful data, the registry makes doing business easier by reducing administrative burdens. While some fear that publishing financial statements could violate trade secrets and give their competition an unfair advantage, experts say this is not the case.

“The intention of the Finance Ministry when introducing the registry of financial statements was to make the process of submitting documents by business persons simpler, to facilitate the processes of using information from financial statements and making the business environment more transparent,” Patrícia Macíková, spokesperson of the Financial Administration, told The Slovak Spectator, adding that the registry is the information system of the public administration, administered by the Finance Ministry.

“The advantage [of the online registry] is the facilitation of making [financial statements] public,” SKAU president Ondrej Baláž told The Slovak Spectator. “It is a contribution to the transparency of the business environment.”

Under the previous rules, companies and other entities obliged to submit financial statements were required to deliver these documents to the tax office as well as the Commercial Registry, and if they were also required to undergo a mandatory audit, they had to publish the information in the Commercial Journal, too, for a fee, according to Baláž.

“We also consider it an advantage that users of the financial statements have easy access to them,” said Baláž, adding that these include commercial partners or potential partners.

Luboš Vančo, managing partner at KPMG in Slovakia, sees as an advantage that the registry and compulsory publishing of financial statements will facilitate business people’s access to the financial information of other companies.

Information regarding the strength, or lack thereof, of a company that one is trading with, is important, Vančo told The Slovak Spectator.

Robert Kičina, the executive president of the Business Alliance of Slovakia (PAS), also identifies the simpler process for submitting companies’ financial statements and the ease with which basic information about other firms can be obtained, as the main advantages of the registry.

“For now I do not see any disadvantages: corporate entities were obliged to publish the given data in the collection of documents also so far,” Kičina told The Slovak Spectator, adding that in the past companies failed to meet this obligation, and it was necessary to pay a fee when somebody wanted to obtain information from the Commercial Registry.

After the registry was launched, some entrepreneurs voiced concerns that having to publish financial statements could violate trade secrets and allow their competition to obtain sensitive information which could be used against them.

Experts disagree with this view, while Vančo stresses that the financial statement is practically not considered a trade secret anywhere in the world.

Peter Pašek, managing director at Accace, added that businesses were able to obtain the data in the past, for a fee. What has changed is the speed and the administrative demands involved in obtaining this data, while in some cases a trade partner may take advantage of how quickly one can obtain data for negotiations with potential suppliers, for example.

The SKAU recalled that the Finance Ministry’s revision to the regulation addressing the content of financial statements omitted the publishing of the most sensitive data and significantly limited the content of the published information.

“Thus, accounting units have much more possibilities to present the required information in a form in which they consider suitable,” said Baláž.

According to Rastislav Machunka of the Federation of Employers’ Associations (AZZZ), in the developed world it is entirely common to publish economic results, and in an even more detailed structure, especially by companies whose shares are traded at stock exchanges.

“Because all are obliged to publish financial statements, then there does not occur any unbalance in the conditions [for doing business],” said Machunka.

Experts and business representatives regard the scope of information which businesses are required to publish as appropriate.

“Accounting units in Slovakia have not realised yet that a seriously elaborated financial statement or an annual report can significantly contribute to a positive presentation of the company,” said Baláž. “They should look at the financial statement as an opportunity and not a useless burden.”

Baláž also believes that information in a financial statement should contribute to better management within a company.

And if the information is unfavourable, “this should be an impetus to take measures to redress the situation and not to cover up the reality,” said Baláž.