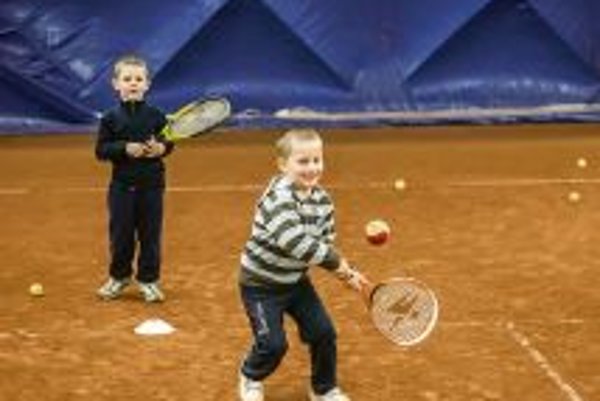 Tennis is among the most expensive sports. (Source: Sme)
Font size:A-|A+0

A GOLD medal hanging around the neck of Slovak athlete participating on the world’s most recognised sport competition is a picture that is increasingly rare. Observers warn that generation of top class sportsmen and women is slowly disappearing as few have the potential of replacing them. Some trace it back to the grassroots level, with fewer children coming to sport clubs.

“We will not have absolute elite [athletes] if we do not have a base-group and if I want to find talented child, they first have to do something,” Slovak Tennis Association President Tibor Macko told the Slovak Spectator. “When I need to choose, I am choosing from some group and the bigger the group, the higher the chance I will find someone truly talented.”

The number of children willing to play sports is falling or stagnating, Miroslav Kucharič from the Representation Committee of Slovak Shooting Federation told The Slovak Spectator. Parents are frequently too busy or do not have enough money to cover their children’s sport activities which are often very expensive, he said.

“In general, there is lower quality of sport performances in particular [athletic] categories which is partially caused by contemporary problems,” Korčok said. “Children have many other possibilities and attractions while sport is not a natural part of everyone’s daily regime.”

The state system of supporting young athletes is insufficient, according to sports associations, which cite a lack of money, playing fields and other infrastructure. Moreover, the number and recognition of obligatory physical education classes at primary and secondary schools should increase. Observers point out that many children and their parents actually try to avoid them.

There were 13,069 sport clubs and more than 661,000 registered athletes in Slovakia, while children accounted for just a quarter of this number at the end of 2011, according to a KPMG study ordered by Slovak Olympic Committee, Šport daily reported.

The average costs for parents on children’s sport activities top the sum €1,025 per year. Tennis is the most expensive individual sport which demands approximately €6,630 per year, on average according to the study. Ice hockey is the leader among team sports, costing parents around €4,200 per year.

Twenty-four of the 116 analysed sports such as golf or figure skating cost from €801 to €1,600; another 24 sports such as archery or canoeing cost from €400 to €801 and 57 sports, including football or basketball cost from €81 to €400 per year. Chess and athletics are among the 21 least expensive sports costing less than €80 per year, according to the KPMG report.

However, sport federation representatives casted doubts about those numbers saying there are huge differences in parents’ expenditures. Some parents are willing to pay great amount of money to see their children’s skills improving while others don’t.

“For example, when parents of an 8 year-old child hires personal trainer and pays for every hour, gym and material those expenses can reach astronomic numbers,” Macko said. “On the other hand, the effect of those investments is not comparable and it is not true that people who do this have better results.”

In skiing, the amount of money spent on children varies significantly depending on the gear, Slovak Ski Association Secretary General Petra Penkert told The Slovak Spectator. Naturally, expenses will also get higher when parents accompany their child on competitions and have to cover travel expenses as well as their stay in hotel rooms, she said.

Several ministries, state firms and colleges sponsor sport activities to support young gifted athletes, chosen professional, sport events or related infrastructure, Michal Kaliňák, the spokesman for the Ministry of Education, Science, Research and Sport, told The Slovak Spectator. According to KPMG an average of €187.2 million per year in public funds was spent on sports each year between 2007 and 2011. Municipalities gave the highest average amount of money, some €132.1 million in this period.

In 2013, the Education Ministry granted nearly €35 million to sport development programs, while €994,686 went to children’s sport activities, Kaliňák said. Around €10 million went to sport federations while the Slovak Ice Hockey Federation got the biggest slice of the cake reaching €1.1 million for representation of Slovak athletes abroad and €614,000 for supporting young talents. The Slovak Football Association received around €1 million with €318,800 from the sum going to youth programs, according to the SITA newswire.

However, state support is just a part of sport federations’ budgets and the percentage varies. For example, state donations accounted for the half of the Slovak Ski Association budget, Penkert said. On the other hand, state support is of crucial help for the Slovak Basketball Association (SBA) since 90 percent of its budget comes from public funds, SBA General Secretary Ľubomír Ryšavý told The Slovak Spectator.

Besides direct donations, the state should support talented children in two other ways, Macko said. The first way is via sport federations focusing on talented children and the second is to assist sport clubs and schools.

It is important to provide sport activities to all children as it is important part of lifestyle, is fun and improves children’s health, Macko said, adding that there should be more obligatory sport courses at primary schools.

“We have to get sport back in the schools and restore the recognition of physical education,” Ryšavý said.

There also should be better cooperation between sport clubs and schools because many parents simply do not have time to take their children to a sport club but at the same time they are afraid to let their children visit it alone, Macko said. Schools should provide their playing fields to students in the afternoon right after the end of classes, he added.

Still, financial problems remain, Penkert said, adding that very few are born with “a silver spoon in their mouth” and children coming from low-income families will not be able to attend courses if the state does not pay coaches.

The state should financially help children in form of vouchers that would pay half the fee for a sport club, according to Korčok.

“The average adult in Slovakia smokes cigarettes, drink wine, beer and spirits costing more than €1,000 per year. Alcohol and cigarettes are consumed by poor as well as rich people,” Korčok said. “There is enough money.”

RUSSIAN-BORN biathlete Anastazia Kuzmina is the only Slovak representative, among 57 athletes, who brought home a medal from this year’s Winter Olympic Games in the Russian city of Sochi. Since Slovakia claimed one gold medal, it finished 16th in the final medal per capita count.

Known for her problems with shooting, Kuzmina held her nerve, missed no target and took gold in the biathlon women’s sprint. In addition to her outstanding performance in the sprint, she also placed sixth in the women’s 10-kilometre pursuit and was a member of a team participating in a 2x6-kilometre women’s relay plus a 2x7.5-kilometre mixed men and women relay, in which she placed fifth, the TASR newswire reported.

“I look forward to celebrating that,” Kuzmina told the press. “I was responding to those congratulations for three days.”

A big surprise was that 23-year-old skier Adam Žampa narrowly missed out on a medal in the super combined after posting the best slalom run of the day to rise from 27th to fifth place in the standings. He also placed sixth in slalom.

During the press conference, Žampa modestly pointed out that while his placing sixth is appreciated, Kuzmina was apologetic for her sixth placement in the 10-kilometre pursuit.

“I would like to highlight Anastazia’s success. Especially when somebody apologises for sixth place,” Žampa said, as quoted by TASR. “It is weird that I boast about such a result.”

Hockey players are not satisfied

But much of the news coming from the games was bad for Slovaks, including a disappointing showing by the men’s ice hockey team that saw the coach eventually offer his resignation.

The Slovak Ice Hockey Federation Executive Committee refused Coach Vladimír Vůjtek’s resignation offer as well as that of General Manager Otto Sýkora. The team finished 11th out of the 12 participating teams, losing all of its matches. The alleged dispute between top players Zdeno Chára and Miroslav Šatan, who did not play in Sochi, was one of the reason’s for offering to resign, Vůjtek said, as quoted by the SITA newswire.

“The last days’ circumstances, the bad result in Sochi and negative, severe and untrue stories are behind my decision,” Vůjtek said, as quoted by SITA. “One just hardly deals with [the accusation] when someone calls you a liar. It is a big shock for my dignity.”

However, the whole committee, along with 10 of Slovakia’s top hockey players, gave their full support to Vůjtek and Sýkora, according to SITA.

Slovak Olympic Committee representatives had to deal with just one violation of rules in Sochi, said Jana Gantnerová, the head of Slovak Olympic delegation, as quoted by SITA.

During the one of Slovakia’s ice hockey matches a member of the Slovak delegation, Boris Vlha, jumped over the barrier in an attempt to reach the hockey puck.

Security detained him and removed him from stadium. The Sochi games directorate dealt with the incident but, luckily for Vlha, it did not strip him of his accreditation, according to SITA.

“I hope he will not face some additional complications because of that,” Gantnerová said. “It was really a serious delinquency.”