THE PREMISES of the former Stein brewery in downtown Bratislava could be threatened by the wrecking ball, according to the Club for the Protection of Technical Monuments. The owner of the complex intends to develop the defunct brewery into a modern complex. 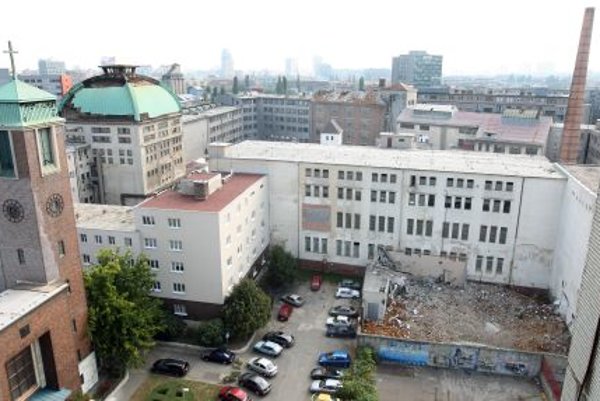 THE PREMISES of the former Stein brewery in downtown Bratislava could be threatened by the wrecking ball, according to the Club for the Protection of Technical Monuments. The owner of the complex intends to develop the defunct brewery into a modern complex.

The Club for the Protection of Technical Monuments, along with architecture and protection experts, wants to preserve at least four buildings of the complex by declaring them national cultural monuments, as proposed by the Slovak Monuments Board in November 2013. The owner subsequently appealed this proposal.

The Culture Ministry is assessing the owner’s appeal, Jakub Ďurinda of the club told the SITA newswire, adding that the future of the Stein brewery’s most valuable buildings is uncertain, and they could still face demolition.

“The Culture Ministry is studying the case and will take a stance afterwards,” ministry spokesman Jozef Bednár told SITA.

The Stein brewery complex is one of the last remaining monuments of a once vast segment of cultural heritage in Bratislava. Together with the Ludwig Mill and the Stollwerk-Figaro plant, among others, it is one of the more important historical landmarks of the food production industry on the territory of the current Slovak capital.

Founded in 1871 near a horse-drawn railway station, the brewery is of historical and architectural importance. The complex survived bombing during the Second World War, and the buildings were specially designed to balance the weight and vibrations of the production machines. Many of the buildings are still in perfect structural condition. The Swiss-made Sulzer furnace is a particularly unique and well-preserved device on the premises, constructed around 1943.

“When considering only the above-mentioned facts, this town complex is a unique and irreplaceable historical and cultural industrial heritage, and until now, it represents a perfect development of cultural expression, the essence of which must be preserved with great attention and prudence,” the club’s report reads.