Fico's competitors agree to unite in second round

IN THE closely watched first presidential debate, just two days after the official campaign began, the four candidates pledged to unite against Prime Minister Robert Fico in the second round of the election. But with a little more than a week before voters go to the polls, it is becoming less clear who will face Fico in the run-off. 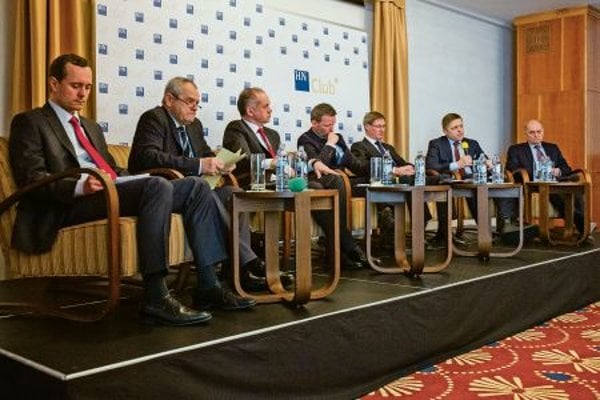 IN THE closely watched first presidential debate, just two days after the official campaign began, the four candidates pledged to unite against Prime Minister Robert Fico in the second round of the election. But with a little more than a week before voters go to the polls, it is becoming less clear who will face Fico in the run-off.

The atmosphere of the March 3 debate, which was organised in Bratislava by the Sme daily and the Trend economic weekly, remained largely civil, with the four participants reluctant to exchange more than just symbolic attacks.

Fico, who currently refuses to communicate with Sme, did not attend the debate. As a symbol of his absence, the organisers left one chair unoccupied, with only a walking stick leaning against it, pointing to Fico’s current condition after he injured his Achilles tendon.

Throughout the debate, each candidate made the same arguments they had been making since announcing their candidacy. Andrej Kiska highlighted his business skills and charity experience, Radoslav Procházka painted himself as a strong president who will stand up for people’s rights, and a breath of fresh air serving as a positive example for the young generation. Milan Kňažko pushed what he called his readability for voters and his role in the emergence of the post-1989 Slovakia, and Pavol Hrušovský drew from his conservative views and his experience from 25 years in politics.

The debate saw the four candidates strike a deal whereby they would support whichever of them makes it to the second round to face Fico.

“I will do everything to prevent Robert Fico from becoming president,” Hrušovský, who faced accusations of allying with Fico’s Smer over the draft constitutional amendment that his Christian Democratic Movement (KDH) party and Smer proposed together, responded.

Kiska, Kňažko and Procházka all pledged to support each other in the second round. Kiska said he would offer not only his moral support, but also all of his billboards to whichever candidate makes it to the run-off against Fico.

“Thank you,” Kňažko was quick to react to his offer.

Kňažko and Procházka expressed support to each other at the end of the debate when asked whom they would vote for if they were not running in the race.

“I will vote for you anyway, one vote will not decide it; but my wife will not,” Kňažko told Procházka in the end.

Hrušovský and Kiska did not specify which of their competitors they would choose.
Generally, the debate saw little tension or conflict between the candidates, as their main rival, Fico, was absent.

Among the many questions asked, the candidates offered their views on how the president can improve the business environment.

Kňažko said this can mainly be done through legislation, since the laws that have been passed have contributed to the deterioration of the business environment. He cited the burden of red tape and the state of the judiciary, saying that the president has some influence there, and that he can veto laws that he finds problematic.

Hrušovský said he would veto laws that threaten the quality of the business environment and worsen the unemployment rate. He would also use his position to talk to foreign investors during international meetings, and secure better conditions for foreign businesses by improving the judiciary.
“Lowering the rate of corruption and cronyism here is the main duty of the president of the republic, even though he does not possess these real powers,” Hrušovský said.

“There are doors out there which only heads of states or prime ministers can enter,” Procházka said, adding that the president should open those doors to Slovak businesses abroad, which is not what is happening right now. Procházka cited a user-friendly government, a balanced state budget and empowering the middle class as his main ambitions.

The candidates spoke often about small and medium-sized businesses (SMEs). Kiska argued that tax licences and the state’s payroll-tax policy are hindering SMEs. He stressed his background in business and noted that Slovakia, as a small country, needs to be export-oriented.

Kiska believes it is not enough for the president to veto laws, but that he must act against legislation during the legislative process, before laws that might harm the business environment are passed.

Former PM Iveta Radičová brought up the issue of the Labour Code, which the Robert Fico government passed in 2012.

Kiska criticised the Code for increasing the unemployment rate with its low flexibility in hiring employees. He said he would stand against the law.

Kňažko said the law on material need is unacceptable because forcing someone to work for material need aid is a violation of human rights, and called the Labour Code counterproductive.

Hrušovský noted that, as an MP, he signed the complaint about the law on material need to the Constitutional Court. As for the Labour Code, Hrušovský would like to get it back to what it was under Radičová’s government.

Procházka said the Labour Code perfectly illustrates the problem of laws being written by bureaucrats who are disconnected from everyday reality.

One day later, the Hospodárske Noviny economic daily organised its own debate, this time with PM Fico attending, as well as Ján Čarnogurský, a former prominent KDH politician who is now running as an independent, with a low chance of being elected.

The debate, organised by HNClub, broached topics such as the role of the president within Slovakia’s constitutional system, the use and extent of presidential powers, the president’s position in relation to parliament, the government and regional and local governments, and the institution of amnesty granted by presidents, the TASR newswire reported.

Fico presented his vision of a clear political leader who would contribute to the creation of stability and attempt to achieve social reconciliation. He stressed his priority to pursue good cooperation with the government, parliament and political parties, according to TASR.

“Somebody needs to bring to the forefront what’s clear, what’s normal and standard, thereby influencing life both in our country and within the EU,” said Fico, as quoted by TASR.

Other candidates mostly repeated the statements they in the previous debate or earlier in the campaign. No major clashes between Fico and the other candidates were reported during the debate.

The campaign, which officially ends on March 13, is generally not expected to result in a lot of mud-slinging. Smer’s campaign will most likely peak around March 8, during events marking International Women’s Day, which Fico’s party traditionally celebrates.