NINE years after Slovakia moved to a three-pillar pension scheme, the government has spelled out the rules on how payments from the so-called second, private pillar will be carried out, and just a fraction of the 3,000 pensioners entitled to tap their money starting in January 2015 will actually be able to withdraw all of their savings immediately. 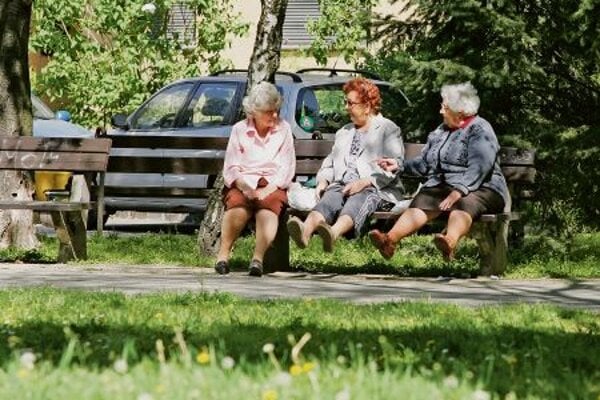 Seniors will get the first pensions from second pillar. (Source: SME)
Font size:A-|A+0

NINE years after Slovakia moved to a three-pillar pension scheme, the government has spelled out the rules on how payments from the so-called second, private pillar will be carried out, and just a fraction of the 3,000 pensioners entitled to tap their money starting in January 2015 will actually be able to withdraw all of their savings immediately.

There will be three forms of payment from the second pillar: life-long pensions to be paid out by insurance companies, payments by a pension fund management company, and a temporary pension to be paid out by insurance companies. This stems from a draft amendment to the pension law that the cabinet passed on February 26 and that will now go before the full parliament, the SITA newswire reported.

The so-called programme withdrawal option, which allows the saver to gradually withdraw accumulated amounts after retiring, will only be possible for those whose first-pillar pension or the combined first and second-pillar pension is more than four times the sum of the living wage, which currently comes to about €800. This will however only apply to a small number of pensioners, as the current average old-age pension is €390 per month.

The clarification of the payment schemes was welcomed by much of the opposition and analysts, who pointed to its absence in the original law. Still, opposition parties have moved to introduce a draft constitutional amendment that seeks to guarantee the existing privatised pension pillar remains in place.

Ivan Švejna of Most-Híd opposes the payment rules, arguing it puts most savers at a disadvantage, and that the plan effectively is the government forcing most people to buy a life-long pension from insurance companies.

“The government wants to legalise it as a duty and does not offer people any other alternative,” Švejna said, as quoted in a press release provided to The Slovak Spectator.

Most of the pensioners in the privatised second pillar will have to ask for life-long pensions which they will receive every month.

In this case, the private insurance companies will have to prepare an offer for paying the pensions from the second pillar and send them to the central electronic system. The pensioner will subsequently choose the best offer and sign an agreement.

The pensioners will be able to choose whether or not they want to have their payment valorised by a percentage set by the national bank. They will also decide whether they want to set aside a sum in the event of their death, which will then be paid to the family in the form of a widow’s or orphan’s pension. In such cases, monthly payments will be about 10 percent lower, as reported by SITA.

For the payment of saved funds via programme withdrawal, the pensioner is entitled to receive the old-age pension from the first, pay-as-you-go pillar exceeding four-times the subsistence minimum, or to receive a combined pension from the first and second pillar exceeding this level, about €800 per month at present. Such a pensioner will be able to ask for the one-off payment or agree upon the period during which the saved money would be paid out to him or her.

The pensioner will agree upon the period and the payments with the respective supplementary pensions saving companies. Moreover, people who paid a voluntary contribution to their account in supplementary pensions saving companies will also be entitled to ask for the programme withdrawal. If the pensioner dies, the bereaved will inherit the unpaid sum.

Similar terms will apply to those who want to make use of the temporary pension, which is paid by life insurers with payments lasting five, seven or 10 years. The bereaved, however, will not inherit the unpaid sum.

The law also stipulates that pensioners who are unable to obtain a life-long pension from any insurer due to insufficient savings can buy a temporary pension or receive money paid out under the programme withdrawal.

Stanislav Žofčák of the Association of Pension Funds Management Companies welcomes the changes, saying it is good that “the government solves the payment of pensions with several forms, thus covering various financial situations of savers”, as reported by the Sme daily. He however still sees some room for softening limits on pensions paid out through the programme withdrawal.

Miroslav Čamek, life insurance manager with the Slovak Insurance Association (SLASPO) and a member of the committee drafting the new rules, said the proposal is a compromise between the parties involved. It sets principles that respect the requirements of insurance companies, explaining that they will know under which terms and how much money they will pay to pensioners. Moreover, he considers the proposed rules to be standard, as their authors were inspired by systems used in other countries, Čamek told The Slovak Spectator.

Despite the positives, there is also the risk that insurance companies will not be willing to join the payment scheme, Čamek said. Though the rules specify conditions for savers, it is questionable whether the system will be simple and inexpensive. The companies will have to ensure that no situation will occur in which pensioners will not receive the money, as there will not be enough funds, Čamek said. A second risk is political as nobody can say whether or in what form the private pillar will exist in the future, he added.

Another problem, according to Peter Goliaš of the Institute for Economic and Social Reforms (INEKO), is the level set for pensioners who are willing to ask for the programme withdrawal. He asked why a pensioner with, for example, a pension at €700, should not be able to withdraw the amount he or she wants.

An alternative solution would be that pensioners would get only part of the money in the form of the life-long pension (with the minimum amount set by the state), with the rest being received through the programme withdrawal, Goliaš told The Slovak Spectator.

According to Vladimír Baláž of the Slovak Academy of Sciences (SAV), it could also be the case that few submit offers through the electronic system, or that the sum, if there was a small number of companies, would not be transparent.

The Slovak Democratic and Christian Union (SDKÚ), the Christian Democratic Movement (KDH), Freedom and Solidarity (SaS) and Ordinary People and Independent Personalities (OĽaNO), have introduced a draft constitutional law aimed at stabilising the existing pension system, which they submitted to parliament on February 28. They propose to gradually increase the deductions from employees’ salaries into the private second pension pillar from the current 4 percent to at least 6 percent of the gross monthly salary by 2017, and to bind the retirement age to average life expectancy, the TASR newswire reported.

Baláž told The Slovak Spectator that he welcomes such a law, especially because the private second pension pillar has been changed several times and “savers need to know that they save [their money] in a system that is stable”.

The Labour Ministry is ready to discuss the proposal, spokesman Stuška told The Slovak Spectator.

Ľudovít Kaník of SDKÚ says that the draft contains compromise measures on which all parliamentary parties, including Smer, agreed. The will of Smer to protect the current pension scheme will be shown by supporting the proposal in the first reading, Július Brocka of KDH told The Slovak Spectator.