French cuisine: Cooking - an act of pleasure and art

FOR THE FRENCH a meal is much more than just nutrition for the body. Cooking in France has been transformed into a culinary discourse, involving history, philosophy and art.

Related: French cuisine I Main dish I Dessert I Other cuisines 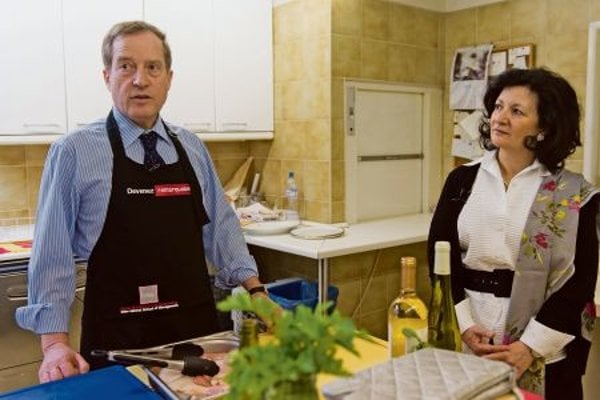 “Cooking and sharing food is an act of pleasure,” explains Didier Lopinot, the French ambassador to Slovakia, while preparing a Chicken Marengo dish at his Bratislava residence. “It’s more of a privileged moment of spending some time together and enjoying the conversation.”

Even though the French do not top world obesity charts, Lopinot suggests that people in France are not really obsessed with healthy food, even though healthy cuisine is widely available in France. However, what the French do insist on is having their lunch at a specific time of day and, whenever possible, together with their family.

“It is still quite important for a French family to have all the family sitting around the table at a specific time and enjoying the same meal, while there is nothing like going to the fridge and picking up whatever you want at any time of the day,” Lopinot said.

Thus around half of the population will be having lunch at half past noon or 13:00, while consuming lots of food or snacking between main meals are not typical French traits, according to Lopinot.

Yet history and legends are closely intertwined with the dishes that the French ambassadorial couple picked for the Cooking with Ambassadors programme prepared by The Slovak Spectator and Sme TV.

Chicken Marengo was allegedly invented when Napoleon defeated the Austrian army at Marengo, a small town in the north of Italy, said Lopinot while elegantly turning pieces of chicken soaked in a sauce of butter, olive oil, wine, tomatoes, mushrooms, onions and a variety of herbs. When “the emperor was happy and hungry” after the victory, his cook desperately scoured the villages for ingredients. Using what he found, he invented the dish, which became a big favourite for Napoleon, who continued to ask for it after each battle, Lopinot explained, relaying the story.

The famous pear-almond desert, Bourdaloue Tart, named after Louis Bourdaloue, a famous French Jesuit, also made it on the French ambassadorial couple’s menu. Bourdaloue, a professor of rhetoric in the reign of Louis XIV, was appreciated by the court as a speaker, and later a street in Paris was named after him. A French baker with a shop on this very street invented this tart, according to Lopinot.
“Cooking and cuisine is considered an art in France; it’s highly respected and it can be a very promising career for the young,” said the French ambassador, who prepared the tart with special care, paying much attention to the aesthetic of the desert. “It is part of the French identity.”

Lopinot explained that French cuisine is rather diverse and includes a wide range of types of cooking, including what is now called molecular gastronomy, which involves the use of science to heighten and transform the flavours in food: “But this doesn’t mean that the cuisine is turning out to be a science: as such, it is still an art.”

Each region of France offers its own specialties: eastern France has ‘choucroute’, a sauerkraut dish that can even be cooked with seafood. The south of France offers dishes with olives, olive oil, garlic, a myriad of herbs, tomatoes and fish, said Elisabeth Lopinot, the French ambassador’s wife. In the western part of France, in Bretagne, there are all sorts of seafood: oysters, lobsters, mussels, but also well-known crepes, she added. Then there is bouillabaisse, the popular soup from Marseilles, the Mediterranean coastal city, Lopinot added.

And of course, as Lopinot emphasised, in France, “a good meal without wine would be incomplete”. Besides, French viticulture is still very much alive and constantly evolving: “young people stop working in companies and offices in big cities to go back to the countryside and launch a new wine-making business”, Lopinot said.

According to the French ambassador, winemaking is highly competitive because there are many good wines coming in from other countries, “which is good because it forces us to keep improving our techniques”, while defending what the French believe is the best.

“There are, as always, big debates in France about wines, just as about cooking,” Lopinot said.
When asked about the differences between French and Slovak cuisine, the ambassadorial couple suggested that the French generally eat more salad-based meals, vegetables and a wider range of cheese. Yet, the French do not eat as much soup as people in Slovakia.

As for their experience with Slovak cuisine, Elisabeth Lopinot and Didier Lopinot appreciate Slovakia’s dishes involving duck and “all the dairy products, which are quite exquisite”.