PERFORMED on opera stages around the world, La Bohéme is making its 12th return to the Slovak National Theatre (SND), with the previous edition ending only in June 2013. La Bohéme first premiered at the SND in 1922, two years after the theatre was founded. 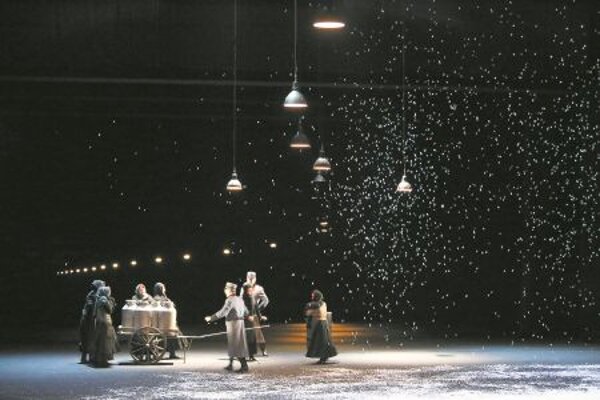 PERFORMED on opera stages around the world, La Bohéme is making its 12th return to the Slovak National Theatre (SND), with the previous edition ending only in June 2013. La Bohéme first premiered at the SND in 1922, two years after the theatre was founded.

This current staging is directed by the renowned Peter Konwitschny from Germany, and conducted by the head of the SND opera section, Friedrich Haider and/or Peter Valentovič. Though very contemporary, it still relays through the beautiful music of Giacomo Puccini the moving story of a group of young intellectuals and artists living on the margins of Parisian society. The atmosphere of the French capital bursts with life, whether in lush spring or in a snowy, frigid winter, and is an important element of the Bratislava performance.

The stage and costume design are the work of Johannes Leiacker, who has collaborated with Konwitschny on several of his works. “La Bohéme was my first collaboration with this brilliant stage designer,” Konwitschny wrote for The Slovak Spectator. “Nine years ago, we presented here [i.e. in Bratislava] our Eugen Onegin – that was still in the old, smaller building – and it was a great job, with a splendid effect. So, why not continue something like that?”

The current production of La Bohéme contains the following alternates: Tomáš Juhás/Kyungho Kim/Ľudovít Ludha as Rodolfo, Daniel Čapkovič/Aleš Jenis/Pavol Remenár as Marcello, Daniel Čapkovič/Peter Mazalán as Schaunard, Jozef Benci and Peter Kellner as Colline, Eva Hornyáková/Katarína Juhásová-Štúrová as Mimi, and Jana Bernáthová/Andrea Vizvári as Musette.
The February 18 performance proved to be an emotionally moving experience for the audience, which applauded rapturously and gave the show a standing ovation.

“My [version of] Bohéme is 23 years old,” Konwitschny said about the Slovak staging. “Here, I have made it for the seventh time, and it is the same as the one 23 years before. If it is still so impressive now, then it is thanks to the fact that the singers are new; but I worked with them as intensely as I did with the original performers. Thus, fully authentic characters were born, and there is an endless number of new details in the fine structure: this is no copy, but rather a very special Bra-tislavaer Konwitschny- Bohéme.”

One regular opera-goer in attendance that night noted that in “every true, classical opera – apart from Falstaff, maybe – at least three characters must die”. In La Bohéme, only a single character dies, but that does not lessen the impact on the audience (though it remains clear that there is no happy ending), as they genuinely feel for the poor, ailing florist, as well as for those who are left behind, vying for success in the merciless world of fast success and superficial judgements.

Director on his work

When asked about his view of Bohéme, Konwitschny was direct and open: “It is a disaster what has happened to the opera. Most frequently, it is flooded with kitsch, sentimentality and stupidity through the interpretation, i.e. the staging. Singers stand dully, i.e. without real relations, side by side, and give out as loud sounds as possible. In this way, the spectator experiences no story, and remains untouched at the human level. And if he is bright, he says to himself: I will never go there again. But the pieces are all wonderful, the stories spellbinding, and when all this is elaborated with singers, we get overwhelmed, as a mature audience. La Bohéme is one of the operas which have most suffered from the prejudice that they are kitschy and sentimental – but unjustly so. It was my ambition to prove that this is not true.”

The SND performers spoke highly of the collaboration with Konwitschny, with Haider saying that he was enthusiastic over the fact that the director is an expert on music; and soloist Pavol Remenár praised Konwitschny as a director who makes actors really ponder the characters and their relationships and who pulls the best out of them. Konwitschny already directed Tchaikovsky’s Eugen Onegin (which is still showing) and Puccini’s Madam Butterfly for the SND.

The opera in the Slovak capital will see more of the German director: “Three years ago, I staged my first opera by Janáček – his last piece, From the House of the Dead,” Konwitschny informed The Slovak Spectator. “I licked blood then, and it is my biggest wish to stage all the works of this incomparable composer. That is why I wished to stage the Makropoulos Affair as the next thing. I am looking forward to what Slovaks will say about my version. I think they will get to see the work of their compatriot from an utterly different angle.” The director shall direct this opera for the Bratislava stage, to be premiered in 2015.

In addition to the current repertory and from the planned premieres, the SND has also brought back to its programme two operas directed by Slovak Jozef Bednárik, who died last August: Turandot by Puccini and Mozart’s Don Giovanni, both his versions.

La Bohéme’s Bratislava staging can still offer new discoveries to avid opera-goers, but at the same time, it can serve as a good ‘first’ for someone who is just discovering the magic of this theatrical form, and Konwitschny’s interpretation is no exception. The visual effects and the music are also quite impressive.

La Bohéme is scheduled to show this season on April 1, April 26, May 30 and June 12. More updated information can be found on the SND’s website, snd.sk.