Children in Slovakia can now learn English with their favourite Cinderella or Aladdin fairy tales by Walt Disney. Tesco began on March 5, 2014, a special Disney card collecting game for customers of all ages. For each €10 of purchased goods, customers will receive a free pack of English-Slovak cards featuring their favourite fairy tale characters, which they can collect and keep in a special card collection album. 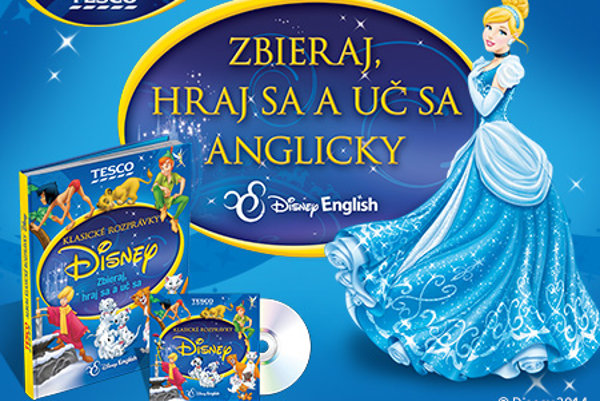 Children in Slovakia can now learn English with their favourite Cinderella or Aladdin fairy tales by Walt Disney. Tesco began on March 5, 2014, a special Disney card collecting game for customers of all ages. For each €10 of purchased goods, customers will receive a free pack of English-Slovak cards featuring their favourite fairy tale characters, which they can collect and keep in a special card collection album.

Tesco bring to its customers this unique opportunity to support learning through playing – in this case, learning English. Children and adults can have fun collecting the cards while also learning new vocabulary. This special event by Tesco Stores SR, a.s. also involves a contest in which two primary schools can win a school sports day.

The card collection album also features the lyrics of popular English children’s songs, in addition to the fairy tales, which are included on a music CD that customers can buy separately.

“My three year old daughter attends a nursery school where children learn English in the form of songs, and she loves to sing. In this way, she learned to count in English very quickly,” said Katarína Lovasová, a mother from Bratislava.

According to Jana Dzurillová, an English teacher in Prešov, it is very important for children to learn English in a spontaneous and informal way. “Children cannot concentrate for long, and thus the methods used in teaching children and adults must be very different. If we launch an English course for children, it is more or less through playing. We listen to songs, watch fairy tales and also draw a lot. Playing linked with a memorable experience is the most effective form of learning for small children,” Dzurillová explained.

“I very much like the fact that children can also memorise words visually through the cards and they will know how they are spelled, which is very important in English,” said Dáša Luknárová, a mother from Nitra.

Tesco’s Disney card collecting game is a fun way for children to learn English.
Children and adults can collect the cards and albums in Tesco until the end of April.

Schools can also participate in the contest. Each package of English-Slovak cards will contains a voucher with a unique code. This can be allocated to a specific school via http://www.tesco.sk/disney, and thus increase its chance to win. The two schools which register the highest number of vouchers win the main prize – a sports day.

Vouchers can be registered for the school by anyone – pupils, parents and teachers. Neither the students nor the teachers need to collect the bills or EAN codes, as is common in similar competitions. To make the competition fair, smaller schools will also get a chance, with one prize going to the school with highest number of vouchers in Slovakia, and the other prize going to the school with the biggest number of vouchers per pupil. There is an additional surprise for the competing schools in the form of a school field trip, or a complete set of sports equipment for physical education lessons. Schools and pupils have until May 7, 2014, to register their vouchers. More detailed information on the competition, like the current placing of the schools in the contest, and the numbers of vouchers collected by individual schools, can be found on the http://www.tesco.sk/disney website.