THE RESULTS of the first round of the presidential elections did not bring many surprises. Robert Fico, prime minister and official candidate of Smer, will face independent candidate Andrej Kiska in the run-off of the election, scheduled two weeks from now, on March 29, according to the official results announced by the Central Elections Commission on March 16. Whoever gets the most votes in that run-off wins and will replace Ivan Gašparovič, whose term expires on June 15.‏ 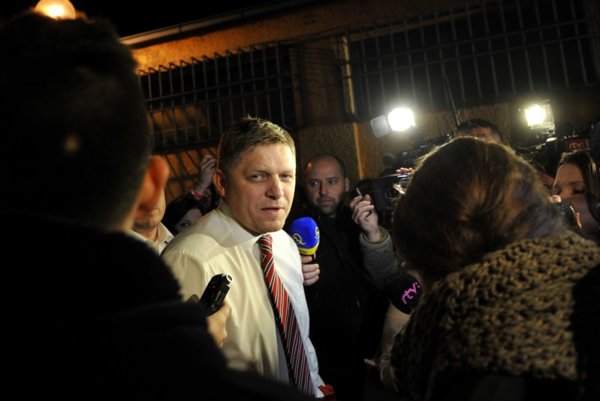 THE RESULTS of the first round of the presidential elections did not bring many surprises. Robert Fico, prime minister and official candidate of Smer, will face independent candidate Andrej Kiska in the run-off of the election, scheduled two weeks from now, on March 29, according to the official results announced by the Central Elections Commission on March 16. Whoever gets the most votes in that run-off wins and will replace Ivan Gašparovič, whose term expires on June 15.‏

Fico won the first round of the election with 28 percent of the vote, followed by Kiska with 24 percent. Opinion polls have suggested this result for several weeks in the run-up to the election. Fico harvested 531,919 votes while 455,996 voters favoured Kiska.

Independent candidates Radoslav Procházka and Milan Kňažko, who were also considered to have a chance of making it to the second round, fell out of the running. Procházka received 21.2 percent of the vote (403,548 votes), while Kňažko earned the support of 12.9 percent of voters (244,401 votes).

The nominee of the Party of Hungarian Community (SMK) Gyula Bárdos received 5.1 percent of the vote (97,035 votes), while the official candidate of the People’s Platform, Christian-Democratic MP Pavol Hrušovský, garnered the support of 3.33 percent of the voters (63,298 votes).

According to the official results, 43.4 percent of the voters voted in the election.

“This is a referendum about Smer,” Fico in his first response to the unofficial results as quoted by TASR newswire pointing out that voter turn-out was lower than expected. “I expect the run-off to be very interesting.”

Kiska said he is preparing a criminal complaint against Fico over his statements in recent televised debate held among presidential candidates, where Fico claimed that Kiska become rich through usury.

"The anti-campaign has begun, I expected traditional politicians to resort to such dirty tricks,” said Kiska as quoted by TASR newswire. “I expected this, I'm willing to fight and this will in no way deter me from my effort to change Slovakia.”

The Slovak Spectator offers brief profiles of Fico and Kiska.

Robert Fico was born in 1964 in Topoľčany and in 1986 graduated from Comenius University’s law school. Following his graduation, Fico worked at the nLaw Institute of the Justice Ministry, and also served as an agent representing Slovakia before the European Court of Human Rights and the European Commission for Human Rights. He was politically active from a young age, joining the Communist Party of Slovakia in 1987.

After the Velvet Revolution, he became a member of the Slovak Democratic Left (SDĽ) party. He was first elected as an MP in 1992. In 1998 he was elected deputy chairman of the party. Later the same year, Fico ran for the post of general prosecutor, but his party endorsed another candidate instead, arguing Fico was too young.

In the 1998 elections that saw the fall of the government of Vladimir Mečiar, Fico received the biggest number of preferential votes among his party colleagues, and in 1999 he left the party, saying he was disappointed with the way the government worked.
Fico acted as an independent MP until the 2002 elections. Almost immediately after leaving SDĽ, however, he founded Smer, which he first labelled a party of the third way.

Between 2002-2006 Smer was the main opposition party in the Slovak parliament. In 2004, it swallowed up nearly all the leftist parties active on the Slovak political scene, including SDĽ. In 2006 Smer won the elections and formed a government with Mečiar’s HZDS party and the nationalists of the Slovak National Party (SNS). Fico served as prime minister until the end of the term in 2010. After a brief moment in the opposition, he returned to the prime-ministerial chair in 2012. At the end of 2013 he announced his presidential candidacy.

The media typically refer to Andrej Kiska as a millionaire and philanthropist. Born in Poprad on February 2, 1963, Kiska has a degree in electro-technical engineering, but he made his career and fortune in the consumer lending business. In 1996-2005 he and his brother founded and ran the hire-purchase companies Triangel and Quatro, the first ones on the market. Kiska sold his shares in the two companies in 2005 to found a charity project, Dobrý Anjel (Good Angel), along with his friend, businessman Igor Brosman. Kiska claims he put Sk30 million (about €1 million) into the project at its start. Before long Dobrý Anjel became very successful.

Kiska was awarded the title Manager of the Year in 2006 and in 2011 he won the Crystal Wing prize for philanthropy.

He decided to run for president in 2012, and left Dobrý Anjel in May 2013. When explaining why he decided to run, he sticks with his charity-related image. He also denies claims that he has used the charity project to build his political career.

Kiska has faced criticism for his past business dealings involving Triangel and Quatro, with his critics likening them to a loan shark operation. Kiska argues that his model indeed created a system of hire-purchase loans with affordable instalments, so “that people were able to buy a television or a car, because not everybody had the available cash to do so”.

He was the first to officially announce his presidential candidacy and his billboards appeared around Slovakia long before the names of his competitors were known. He is running as an independent candidate and has no political background whatsoever.
Kiska has stressed his lack of political involvement as one of his strengths, while his website features the slogan “The First Independent President”.