PRIME MINISTER Robert Fico did not get the result he was expecting in the first round of the presidential election and many, including Fico himself, are linking his lower than expected vote totals to the low voter turnout. 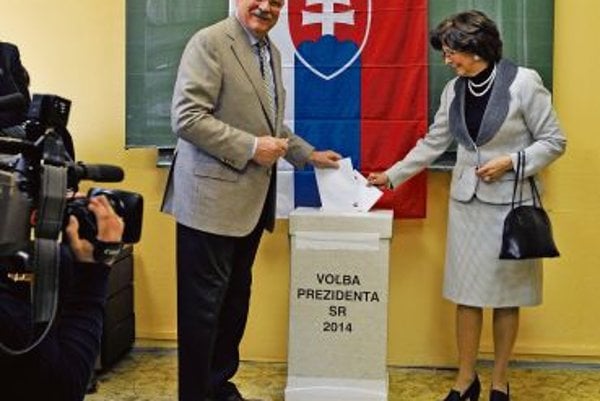 President Ivan Gašparovič has a favourite for his successor too. (Source: TASR)
Font size:A-|A+0

PRIME MINISTER Robert Fico did not get the result he was expecting in the first round of the presidential election and many, including Fico himself, are linking his lower than expected vote totals to the low voter turnout.

The official results of the March 15 presidential election show that only 43.4 percent of the voters turned up to the polls. While 28 percent of voters supported Fico in the competition, 24 percent gave their votes to Andrej Kiska, who will now be Fico’s challenger in the run-off round, scheduled to take place in two weeks.

After the results were published, Fico admitted he expected the turnout to be around 60 percent, and said the lower turnout also caused his support to be lower than he expected. He said his expectations were around 29-30 percent. The pre-election polls estimated his preferences at between 35-40 percent.

Grigorij Mesežnikov, president of the Institute for Public Affairs, admitted he expected the turnout to oscillate between 50-55 percent. The actual low turnout was definitely unfavourable to Fico. In the 2012 parliamentary elections his Smer party received about 1.3 million votes, two years later just 530,000 citizens came to cast their vote for him.

“It is evident that – even though there might have been some shifts [in the voters’ support] and some of the former Smer voters supported other candidates – a vast majority of them stayed at home,” Mesežnikov told The Slovak Spectator, adding that this was the main reason why the turnout was lower than expected.

“The question is whether [Fico] manages to mobilise all these voters in the second round,” Mesežnikov said. “It’s a very tough task.”

What the pollsters say

On the other hand, Martin Slosiarik of the Focus polling agency was not surprised by the low turnout, saying he expected it to be around 47 percent.

He too links the low turnout with low support for Fico.

“I am not inclined to accept the hypothesis that Smer voters would support another candidate,” Slosiarik told The Slovak Spectator, explaining why he believes it was Smer voters who did not turn out this time.

What happened to Fico is what sometimes happens to favourites in the elections.
He did not have a motivational campaign, and the people relied on his winning even without their votes.

But Slosiarik admits he expected a low turnout to help Fico rather than the contrary.
“The Smer voters seemed firm, this electorate in most cases shows symptoms of firmness of their voting decision,” he said.

Blame it on the rain

Some analysts noted that the bad weather that hit Slovakia on the election day after a week of sunny spring might have distorted the turnout numbers.

On Saturday, March 15, the north and the east of the country were especially hit by strong windstorms, and some places with heavy rain or snow.

“The weather influences the undecided voters, and there was a high percentage of those who were saying that they didn’t know whether they would go to vote,” political analyst Miroslav Kusý told The Slovak Spectator. While weather might be a factor, it is not a decisive one, he added.