ON THE last night before the pre-election campaign moratorium went into effect on March 13, the five strongest presidential candidates had a busy schedule, participating in two televised debates on the public service RTVS and the private Markiza television network. 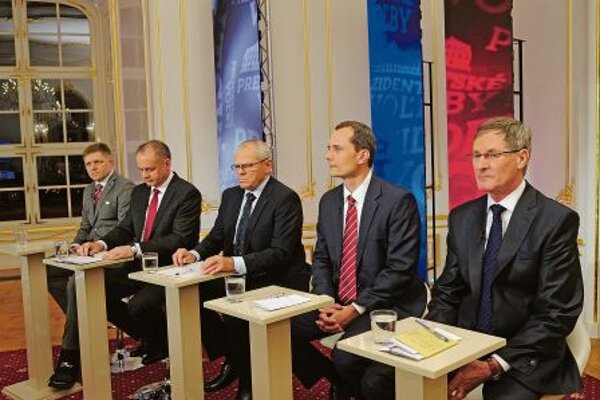 ON THE last night before the pre-election campaign moratorium went into effect on March 13, the five strongest presidential candidates had a busy schedule, participating in two televised debates on the public service RTVS and the private Markiza television network.

The format of the RTVS debate was based on a legally established rule granting 12 minutes for each candidate to respond.

Even though this was the last chance for the candidates to face each other and speak to the voters before they headed to the polling stations, the atmosphere of the debate remained rather calm and the candidates mostly repeated the arguments they had made in previous debates.

Hrušovský stressed his experience and the political culture he represents. Procházka said he would be a new start for the country and wants to introduce an active role for the presidency. Kňažko emphasised his familiarity among the public and stressed that he can stand up to the challenges of today’s Slovakia. Kiska said the president should understand the economy, be in touch with reality and remain independent.

Fico maintained that he is used to making difficult decisions, that he has loads of experience and contacts among foreign politicians, and that he wants to put all of this into the presidency. He also said he would like to unite the political parties, rather than perpetuate conflict in the government.

The candidates repeated their accusations against Fico that he wants to become president merely to concentrate power in his and Smer’s hands.

Fico denied this, saying that “whoever talks about a concentration of power denies elementary principles of democracy”, adding that parliament and the president are selected in general elections.

Kňažko responded to this by pointing out that it is not about the power won in the elections, but rather about the control of this power, because power cannot control itself alone. He pointed to the personal connections, for instance, between the government and the General Prosecutor’s office, and the vacant seat of the National Control Authority (NKU).

“It’s everybody against one, I am used to this,” Fico said. Procházka told him to stop whining.
Kiska, who is now Fico’s opponent in the second round, also faced questions about his friend and co-founder of the Good Angel charity organisation, Igor Brossman, who publicly supported another candidate, Kňažko, and said that Kiska violated an agreement that the project would not be abused for political purposes.

The candidates were also asked how much they spent on their campaigns and agreed that the election law needs to be changed, since it allots just two weeks prior to the election for the official campaign, even though unofficially the campaign lasts more than a year in many cases.

“You’ve got five phrases that you keep repeating all the time,” Fico told Kiska at one point, and in turn accused Kiska that he earned his money unethically. Fico even offered to provide evidence from court cases showing that Kiska’s former companies, Triangel and Quatro, misled people and lied about the terms of the loans. Kiska denied this.

Fico also accused Kiska of supporting registered partnerships for same-sex couples and of not supporting the constitutional protection of marriage, as proposed jointly by Smer and the KDH.
Kňažko pointed out that human rights cannot be put against the protection of marriage in society.
The debate that followed only minutes later on Markíza was more confrontational in tone, but nothing new was said.