IN ADDITION to their oft-cited shared Celtic roots, Ireland and Slovakia also have much in common in terms of religion, culture and traditions. These similarities are celebrated throughout the whole year, especially on St Patrick’s Day, on March 17. 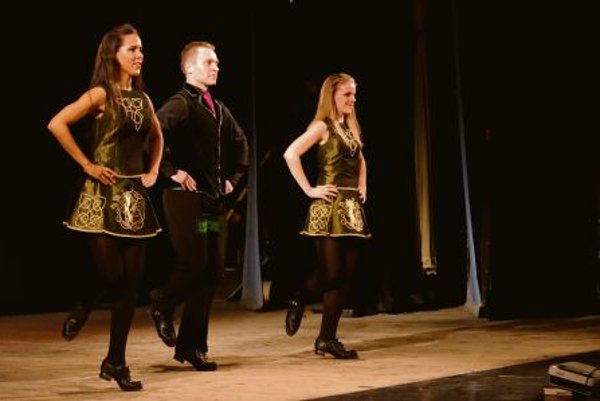 IN ADDITION to their oft-cited shared Celtic roots, Ireland and Slovakia also have much in common in terms of religion, culture and traditions. These similarities are celebrated throughout the whole year, especially on St Patrick’s Day, on March 17.

In 2014, two evenings of Irish dance were offered shortly before Ireland’s national holiday. The “Evening of Irish Dances” was held on February 21 as a gala organised by the Bratislava-based Avalon Academy of Irish Dance, led by Adriana Šturdíková, a European champion in Irish dance.

Conceived as an introduction to Irish history through dance, the evening included a slide show and two demonstrations of period clothing and arms brandished during mock duels by the fencing and theatre group Argyll. The main event was dance, both traditional and modern, presented by the academy’s dancers, ranging from 3 to 60 years-old. The Zrkadlový Háj (Mirror Forest) House of Culture in Bratislava’s Petržalka borough was packed.

“I wanted to dance this style, but found out that most groups and schools just copied video recordings,” Šturdíková told The Slovak Spectator. “I started learning from teachers in Austria, later brought them here – and still later, I travelled to Ireland where I studied in several dance schools.”

Šturdíková said she founded the Avalon Academy in 2001 and by 2014, several students have become winners in European Championships in the highest, Open Class.

A second major Irish dance event on March 7 offered a slightly different cup of tea. More intimate, and thus drawing mostly connoisseurs and the Irish, it was organised in the Elle dance theatre and studio to honour the presence of a “truly Irish” dance professional and instructor, Colin Dunne. He led master classes with Mary McElroy, another Irish dance teacher.

“It was nice to see all the local Irish dance groups perform together on the same stage; that’s something that rarely happens in Irish dance,” Dunne told the TA3 TV channel after the show. “It was very nice to see people come together this way.”

“Performing to live music is now less and less common,” Dunne continued for The Slovak Spectator. “I slightly lament that because it’s nice to have the live music to dance. But improvisation is something that is not a great part of Irish dance, where you are very much taught what to do, and you practice those steps and you perfect them.”

As for improvisation in Irish dance, Dunne said it was less common, but the goal was to feel more like a musician.

“I often find that dancers who are technically better are not so good at improvisation,” he said.

“The dancers who are maybe technically not so advanced have that something, because they are not so bound up by the technique. Improvisation is about the way of thinking, letting the intelligence of the body just take over. And as soon as you start thinking, you stop.”

Dunne grew up in an Irish family in Birmingham, England, and was raised amid the traditional culture, dancing since he was 3, and winning his first World Championship title at age 9. He performed with the world-renowned Riverdance, and then became an “artist in residence” in contemporary dance at the University of Limerick.

“I was 32 and I just felt I’ve reached the stage in my relationship with Irish dance that I didn’t know what else to do with it,” he said. “As I was living in New York, I started going to many contemporary dance performances, got intrigued and curious about it; and was moved by a lot of performances without knowing why, and thus, I connected with it. I then studied contemporary in Limerick, as an Irish dancer.”

“The really contemporary dance as I see it,” Dunne continued, “is more about understanding the body and understanding what the body can or cannot say. I am not so interested in combining contemporary dance movement with Irish dance, for me that doesn’t work. It’s more about the contemporary way of thinking. When you combine them mechanically, like adding arms and upper body movement to the feet, it just dilutes both. But through contemporary dance, I learned another way of connecting with the floor, actually to release, in a very subtle way, when you look at it, but in a huge way. It was a big physical shift for me, and I physically connected with the original, traditional Irish dance in a very different way afterwards.”

He also commented on the myth surrounding Irish dance’s unnatural posture and insisting it was not the lack of space for dancing.

“Irish dance is basically a tap dance, and 100 years ago, many dancers did move their arms,” he said. “In its original form, people moved not just their hands, but the whole body – and they hung, in a way. I associate the lack of movement in the arms and upper body with the beginnings of the 20th century and the whole revival of Irish culture. The governing body that was set up to look over the whole spectrum of competitions – because people in numerous competitions moved their bodies and arms in different ways – standardised the whole issue and there was a decision made that the Irish should not move the upper body.”

Both dance events were attended by the Irish Ambassador to Slovakia, Anne-Marie Callan, while the latter also drew embassy support. For more information on Irish dance events throughout the year, check the dance school websites.