THE BELGIAN passion for beer is neither accidental nor fleeting. A country of 11 million people, spanning 30,000 square kilometres, Belgium has 150 breweries which produce 1,100 varieties of beer, says Christian Lepage, the Belgian ambassador to Slovakia, while preparing his carbonades flamandes, a Flemish beef stew cooked in beer. 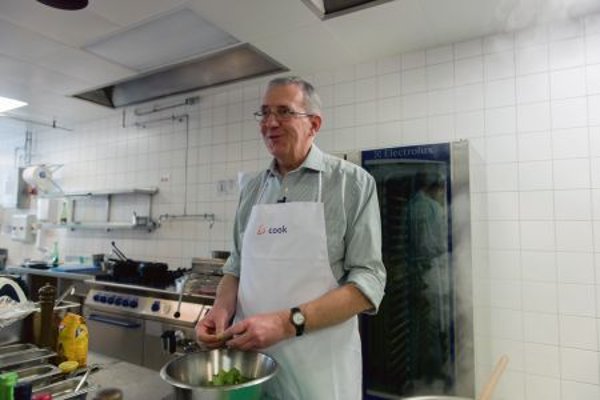 “Just to give you an idea of the Belgian beer tradition, in 1900 we had a total of 3,223 breweries,” Lepage said, adding that six of the eight officially recognised Trappist beers brewed in monasteries by monks are actually produced in Belgium. “Beer is a drink and a food all in one. Monks called it ‘liquid bread’.”

Lepage readily offers a brief guide to the world of Belgian beer for the audience of the Cooking with Ambassadors programme, prepared by The Slovak Spectator and TV Sme. Beer is divided into three main categories: low-fermented or blonde ale; beer with high fermentation, generally brewed with a darker malt; and beer produced by spontaneous fermentation with no yeast added, which has a variety of sub-categories.

Further illustrating the importance of the beer-drinking tradition, Lepage explains that every beer type has its own glass. For example, balloon glasses are suitable for strong beer, while champagne flutes are better for delicate beer.

Yet the menu prepared by Ambassador Lepage and Björn Juhnke, the executive chef of Kempinski Hotel River Park, leaves no doubt about the importance of beer in Belgian cuisine: the Pancakes Mikado owe their pinkish colour to the “Kriek” cherry beer, for example. The hosts selected a special beer for the aperitif: Deus - Brut des Flandres, made from summer barley and selected yeast that matures over several months.

Belgians, however, do have a passion for good food and according to Lepage, who was slicing the shallots for his stew as skilfully as any professional chef, they have elevated it to a form of art.
“We are so passionate; we love food and we really take the time to find the best ingredients,” said Lepage, adding that his country fortunately has a “little bit of everything” thanks to being a multicultural society.

However, Lepage and Juhnke selected dishes with ingredients that are easily found in Slovakia and which they thought might inspire Slovak audiences to give Belgian cuisine a try.

“We started with a salad, which I would call a mix of land and sea, since I noticed that in Slovakia you do not eat that much seafood,” said Lepage, who skilfully removed the core of the witloof, or Belgian endive, a delicate plant originally discovered in Belgium back in 1830, explaining that this removes its bitter taste.

To bring out the flavour of the sea, the ambassador added herring to the salad, explaining that the presence of the sea is one of the main differences between Slovak and Belgian cuisine, and widens the variety of meat that Belgians consume.

“We have the sea bringing delicious food,” said Lepage, adding that in Belgium there are numerous recipes for mussels, grey shrimp from the North Sea, sole, plaice and cod.

Without chocolate the Belgian experience would not be complete, with Lepage suggesting that consuming dark chocolate can easily ensure one’s daily intake of magnesium. Also, according to the ambassador, dessert is a must, explaining that this is what the guests will usually remember the most about a meal.