VOTERS took the victory of Prime Minister Robert Fico in the first round for granted or they were confused about the prime minister running for president, political analysts speculated as Smer’s official presidential candidate outpaced rival Andrej Kiska by just a little more than 4 percent in balloting. 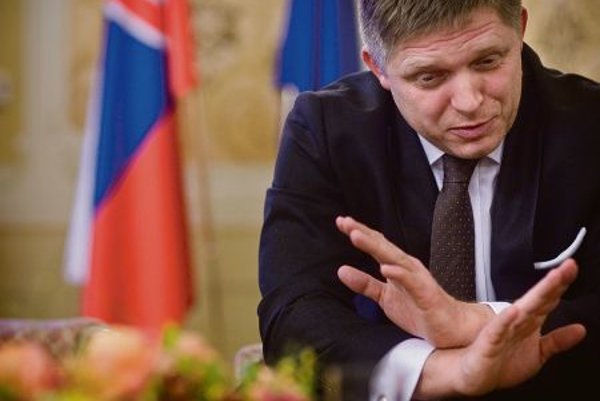 VOTERS took the victory of Prime Minister Robert Fico in the first round for granted or they were confused about the prime minister running for president, political analysts speculated as Smer’s official presidential candidate outpaced rival Andrej Kiska by just a little more than 4 percent in balloting.

With approval rates oscillating between 35 and 40 percent over the past two years, Fico picked up on March 15 a mere 28 percent of the votes, with Kiska garnering 24 percent as the pair moves on to the second round run-off.

Fico and his people have been arguing that running from the position of prime minister is making it more difficult for Fico to run for the presidency, with Grigorij Mesežnikov, president of the Institute for Public Affairs (IVO), responding that “of course Fico now is trying to present his defeat as victory”.

When asked about Fico’s performance in the first round, head of the MVK polling agency Pavel Haulík told The Slovak Spectator that Smer voters might have told themselves that “everything has been decided already and it is not necessary to vote”. He also has said that there are several hypotheses and speculations about Fico’s election failure, but quickly added that because of the lack of exit polls there is no data from which to draw clear conclusions.

“Yet, part of the Smer voters might really wish more for Fico to remain a prime minister than to become president,” Haulík said. “Based on the polls it seemed that Fico has persuaded voters to support his presidential ambitions, but obviously this conviction was not strong enough to bring these people to the polling station.”

Now it is all out in the open, whether Fico is able to persuade his voters to go to the polling stations, said Haulík. However, the idea of the voters punishing Fico in the form of defeat in the presidential elections seems to Mesežnikov a rather complicated construction.

“The voters of Smer consider him [Fico] the best choice and have always supported him,” Mesežnikov told The Slovak Spectator adding that “it could have influenced part of the voters in their decision making, but I do not think that more than 600,000 voters stayed at home so that they express that they support Fico in the position of prime minister”.

Mesežnikov agrees with Fico’s observation that this election is a referendum about the Smer boss and his government.

“It turns out that after two years of ruling, Fico does not appeal to his supporters as he did before; moreover, he mobilises his opponents and critics,” Mesežnikov said.
Political analyst Miroslav Kusý called Fico’s result a failure and noted that so far in all the presidential elections the first-round’s favourite entered the run-off with an incomparably higher vote-count.

“It’s the first time that it’s this low,” Kusý said.

When one looks at previous presidential elections, Vladimír Mečiar, Slovakia’s former three-time prime minister had higher numbers as did Ivan Gašparovič, the outgoing president, Kusý noted.
“Since there are direct elections held, the performance of the favoured candidate was incomparably better,” Kusý said.

Nevertheless, Kusý also admits that the result could be attributed also to the fact that the total participation was relatively low, a mere 43 percent.

Political analyst Juraj Marušiak from the Slovak Academy of Sciences also believes that Smer voters thought that Fico would be able to put together the necessary votes without them. However, Marušiak also suggests that people might have worried about one party controlling all the significant posts.

According to Marušiak, Fico’s statements about the vote being viewed as a referendum about him are correct as the campaign to a large degree was focused around the person of Fico.

“Part of the Smer voters was after all surprised by the sudden programme change of Smer in the issue of political support for the traditional marriage and family,” Marušiak said adding that after all Smer has not been known as a purely conservative party. “Maybe the strange union with the KDH was one of the reasons why he finally did not get a higher number of votes.”